Source: DTN News - - This article compiled by Roger Smith from reliable sources Boeing
(NSI News Source Info) ST. LOUIS, - December 22, 2010: The Boeing Company [NYSE: BA] today announced it has received a contract from the U.S. Air Force to deliver C-17 training devices to three sites. The contract value is $44 million initially and up to $72 million if two options are exercised. 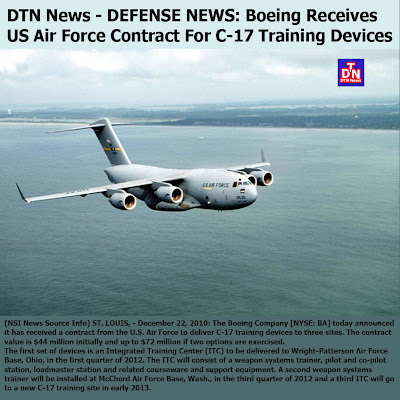 The first set of devices is an Integrated Training Center (ITC) to be delivered to Wright-Patterson Air Force Base, Ohio, in the first quarter of 2012. The ITC will consist of a weapon systems trainer, pilot and co-pilot station, loadmaster station and related courseware and support equipment. A second weapon systems trainer will be installed at McChord Air Force Base, Wash., in the third quarter of 2012 and a third ITC will go to a new C-17 training site in early 2013.

"Wright-Patterson is set to receive its first of eight C-17s next year and McChord has 54," said Mark McGraw, Boeing vice president for Training Systems & Services. "We are proud to add to the Air Force’s training capability and support warfighter readiness with these new devices."