The officials allege the Kornet missiles the militants possess came from Iran. They provided no proof. 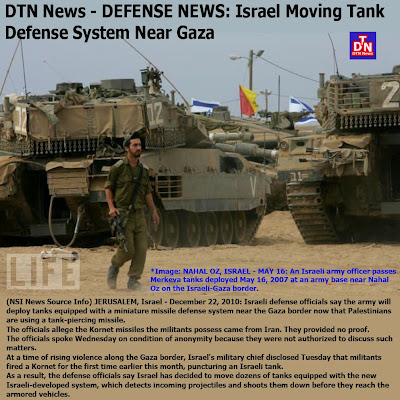 The officials spoke Wednesday on condition of anonymity because they were not authorized to discuss such matters.

At a time of rising violence along the Gaza border, Israel's military chief disclosed Tuesday that militants fired a Kornet for the first time earlier this month, puncturing an Israeli tank.

As a result, the defense officials say Israel has decided to move dozens of tanks equipped with the new Israeli-developed system, which detects incoming projectiles and shoots them down before they reach the armored vehicles.

NAHAL OZ, ISRAEL - MAY 16: An Israeli army officer passes Merkeva tanks deployed May 16, 2007 at an army base near Nahal Oz on the Israeli-Gaza border. Israeli Defense Minister Amir called the Palestinian Qassam rocket firing 'intolerable and will reap a response.' At least 30 Israelis were injured from the more than 25 Qassam rockets that have fallen in and around the southern town of Sderot in the past 24 hours.