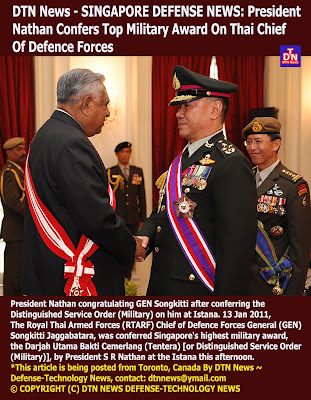 The medal was awarded to GEN Songkitti for his significant role in strengthening the excellent defence ties between the RTARF and the Singapore Armed Forces. Under his leadership, the close and longstanding defence relationship between Singapore and Thailand has grown in scope and depth. GEN Songkitti's support for a closer cooperation between the two defence establishments has enhanced understanding and personal friendships between the officers and men of both armed forces.

GEN Songkitti, who is on an official visit to Singapore from 12 to 14 Jan 2011, also called on Mr Teo and LG Neo at the Ministry of Defence this morning.