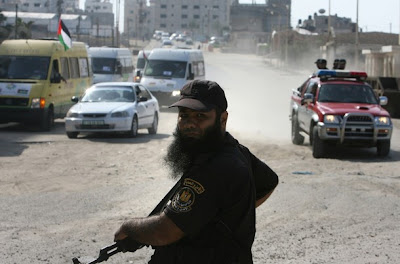 A security officer of the Islamist movement Hamas stands guard as a European convoy carrying medical supplies for the impoverished Palestinian territory arrives at the Al-Shifa hospital in Gaza City on November 12, 2009. The Palestinian electoral commission on Thursday indefinitely postponed general elections called for January because the vote cannot take place in the Hamas-ruled Gaza Strip. "These claims are part of the Israeli lies to justify a new aggression on the Gaza Strip," Hamas spokesman Fawzi Barhoum was quoted as saying. "Such threats are coming under the title of incitement and creating pretexts in order to commit more new crimes against Gaza and cover up the previous crimes that were committed during the last war," Barhoum reportedly said, referring to Operation Cast Lead. On Friday, IDF Chief of General Staff Lt.-Gen. Gabi Ashkenazi stressed that if Hamas continues to launch rockets at Israel, the IDF will have no choice but to conduct another operation in Gaza. IDF launches 'counter-Goldstone' probe "We are learning lessons and we will correct our mistakes," he said while speaking to high school students in Beersheba concerning last winter's Operation Cast Lead and the Goldstone Commission's scathing report. Earlier in November, OC Military Intelligence Maj.-Gen. Amos Yadlin revealed that the terrorist group had test-fired a rocket with a 60-km. range. Yadlin told the Knesset's Foreign Affairs and Defense Committee that the IDF had detected the launch of a rocket with a 60-km. range from the Gaza Strip into the Mediterranean Sea. The missile, officials said, was probably a version of an Iranian-made artillery rocket that is 5 meters long and can carry a 45-kg. warhead. To increase the rocket's range, they noted, Hamas had the option of shrinking the warhead to 25 or 30 kg., enabling it to strike deeper into Tel Aviv.
Posted by Defense-Technology News at 11/14/2009 04:10:00 PM No comments: 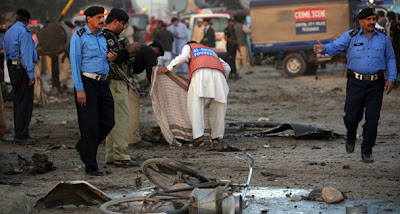 Pakistani policemen examine the site of a suicide car bomb blast on the outskirts of Peshawar on November 14, 2009. Peshawar has been bombed several times since the army began an offensive against the Taliban in South Waziristan last month. Militants have hit back by stepping up attacks on towns and cities, killing several hundred people. ‘The car bomber approached a barrier near the police check post and then it exploded,’ city official Sahibzada Anis told Reuters. Ten people were killed and more than 20 wounded, he said. Police said two of their men were among the dead. Pieces of the bomber’s car littered the road. Several other vehicles were badly damaged, with one flipped onto its roof. 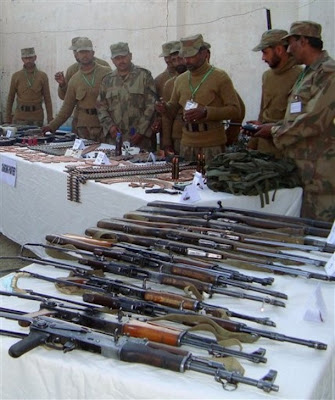 Pakistan army soldiers examine weapons and ammunition confiscated after gunbattles with insurgents and displayed for media in Charbagh near Mingora, the main town of Pakistan's Swat Valley Saturday, Nov. 14, 2009. Pakistani troops killed eight insurgents Saturday in gunbattles in the Swat Valley, the military said, underscoring that the Taliban threat in the region persists more than three months after a government offensive to expel the militants. There was no immediate claim of responsibility for the blast. The army offensive in South Waziristan is aimed at rooting out Pakistani Taliban militants who stepped up their war on the security forces in 2007. The United States, weighing options as it struggles to stabilise Afghanistan, says Pakistani action against militants in border enclaves is vital for its Afghan effort. TALIBAN CLAIM On Friday, a suicide car bomb exploded at an office of Pakistan’s main intelligence agency in Peshawar, killing 17 people. The Taliban said it carried out that attack, as well as a suicide bombing at a police station in the northwestern town of Bannu on Friday, in which seven people were killed. ‘We will carry out similar attacks in other parts of the country,’ Qari Hussain Mehsud, a senior Pakistani Taliban member and a cousin of Taliban chief Hakimullah Mehsud, told Reuters by telephone. Hussain is known as ‘the mentor of suicide bombers’. The military says it has killed more than 520 militants in the offensive in South Waziristan, including seven on Saturday. Soldiers have advanced into the militant heartland from three directions and captured several Taliban base areas in the region of barren mountains, ravines and patchy forest. There has been no independent verification of casualties. Reporters and other independent observers are not allowed into the conflict zone except on occasional trips with the military. The violence in recent weeks has rattled investors and the main stock index has lost about 5 per cent since the offensive began. But it ended 1.60 per cent higher at 9,067.17 on Friday after the International Monetary Fund (IMF) said the previous day the economy showed signs of recovery but risks remained. Finance Minister Shaukat Tarin told Reuters the IMF had expressed concern about how insecurity could affect the economy.— PESHAWAR, Pakistan — Pakistani troops killed 13 militants in two separate gunfights Saturday in the northwest Swat valley, officials said. Five militants were killed after a group of insurgents ambushed a military convoy near Totakan village, Malakand district administration chief Siraj Ahmed said. 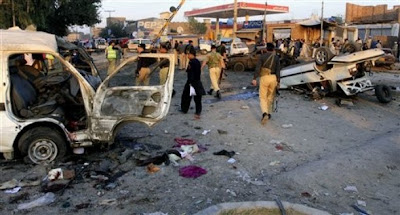 Pakistani police officers examine the site of a suicide car bombing in Peshawar, Pakistan, on Saturday, Nov. 14, 2009. A suicide car bomber killed people Saturday at a police checkpoint on the outskirts of the northwestern Pakistani city of Peshawar, in the latest in a string of militant attacks targeting the city, officials said. Eight more insurgents were killed during a search operation in thick forest near Mangaltan village, a local military spokesman said, adding that the soldiers seized a large number of arms and ammunition. The death toll could not be verified independently as the area is still under military operation. Swat had slipped out of government control after radical cleric Maulana Fazlullah rose up in July 2007, commanding thousands of followers who beheaded opponents, burnt schools and fought to enforce Islamic law. 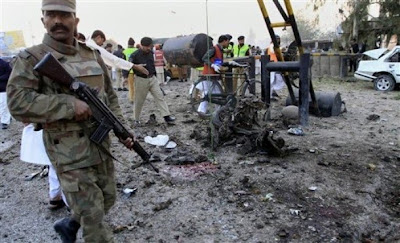 A Pakistan army soldier stands at a site of a suicide car bombing in Peshawar, Pakistan on Saturday, Nov. 14, 2009. A suicide car bomber killed people Saturday at a police checkpoint on the outskirts of the northwestern Pakistani city of Peshawar, in the latest in a string of militant attacks targeting the city, officials said. An anti-Taliban offensive in and around northwest Swat valley earlier this year forced nearly two million people from their homes, creating a massive humanitarian crisis in the impoverished country. Most have since returned home after the military in July declared the area safe. But unrest continues, with a suicide bomb by Taliban rebels in Shangla district near Swat killing 45 people last month. Pakistan launched another punishing air and ground offensive in South Waziristan tribal district on October 17, with 30,000 troops backed by fighter jets and helicopter gunships.