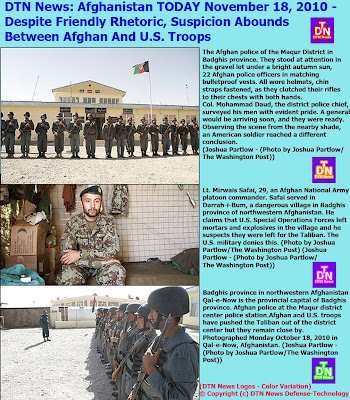 Col. Mohammad Daud, the district police chief, surveyed his men with evident pride. A general would be arriving soon, and they were ready.

Observing the scene from the nearby shade, an American soldier reached a different conclusion.

"They're [expletive] worthless," he said.

"I've never seen them in any formation before," he said. "They're never in uniform."

One of the Afghan war's key assumptions is encapsulated by three endlessly repeated Dari words: "shohna ba shohna," or "shoulder to shoulder," the chosen metaphor of military brass to describe the American partnership with Afghan troops: two nations side by side in the long hard march against the Taliban.

The reality is not so seamless. Early this month, an Afghan soldier allegedly turned his rifle on his American partners and shot dead two U.S. soldiers in Helmand province. Such fratricide remains an anomaly. But mutual suspicion and dissatisfaction are easier to find, as barriers of language and culture compound the daily frustrations of fighting.

A few hundred yards above Daud's police station in the deserts of Badghis province, Lt. Mirwais Safai, 29, smoked a cigarette and brooded over this partnership.

"I will tell you the truth," he began. "The Americans themselves support the Taliban."

For 52 days, Safai commanded an Afghan army platoon in Darrah-i-bum, a treacherous Taliban enclave, alongside a U.S. Special Operations team. Together they endured a string of attacks, from makeshift bombs to incoming rockets.

They began as trusted comrades in a dangerous fight, he said, but he soon grew suspicious of the Americans' secrecy. At one point, he said, U.S. troops were holding conversations with villagers in a clinic, and excluding the Afghan medic. "Spies were coming and going," he said.

His fears grew Oct. 13, the night the parachutes fell from the sky.

The Americans recovered most of the airdropped supply crates, including water and ammunition, Safai said, but left one of them in the village. Safai and his men found it the next day, pried it open and found it packed with mortars and boxes of explosives, he said. He photographed the contents and brought the crate to his American partner.

"He was yelling at me, 'Why did you bring this here?'" Safai recalled. "When he saw the ammunition, he stopped yelling."

Asked about this episode, Lt. Nicole Schwegman, a U.S. military spokeswoman in Kabul, said: "We do not, under any circumstances, provide supplies to the Taliban."

During the airdrop of 12 supply crates that night, she said, two collided, sending one container of water crashing into the wall of a villager's home. The U.S. troops apologized for the damage, she said, and offered compensation, as well as the water from the container. She said the 11 other loads were all recovered that night. "No ammunition or explosives were left unrecovered overnight," she said.

But Safai's superior, Capt. Mohammad Aref, stood by his story.

"He's describing things he's seen with his own eyes," he said.

Safai has since left Darrah-i-bum, with his photographs of mortars and a lingering suspicion about his partners.

"I'm not sure if that ammunition was put there by mistake or intentionally to help the Taliban. That's something the government has to find out," he said. "But if I'm representing the Afghan government, why are the Americans keeping secrets from us?"

Faces of the Fallen: U.S. Fatalities in Iraq and Afghanistan

...half a century, and after nine years of combat in Iraq and Afghanistan , why are our soldiers still involved in fair... 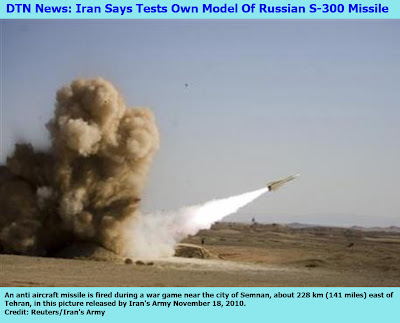 "Mersad medium-range air defense system was successfully test- fired in one of the rifle ranges of the country's air defense," the spokesman of the drill Brigadier General Hamid Arjangi was quoted as saying.

"It is a completely indigenous digital system and is able to deal with electronic wars. It can intercept and annihilate modern aircrafts in low and high altitudes and connect to radar network," said Arjangi.

Also, Iran's radar network managed to locate small-scale stealth radar drones of the hypothetical enemy on the third day of drill Thursday, said the commander according to ISNA.

Iran launched one of its largest nationwide air defense drills on Tuesday, assuming possible attacks on its public or nuclear establishments. Aerial defense units from the army and the Islamic Revolution Guards Corps (IRGC) are taking part in the three-stage, five-day defense maneuvers dubbed "Modafean Aseman Velayat 3" (the Guardians of Islamic Skies).

According to spokesman of the drill Brigadier General Hamid Arjangi, various kinds of fixed and mobile radars indigenously manufactured or refurbished would be tested during the third day of the drills, said the report. Full story

TEHRAN, Nov. 18 (Xinhua) -- Iran has designed and tested successfully an air defense system that has the same capability as the Russian-made S-300 missile system, the local satellite Press TV reported on Thursday.

"We have developed the system by upgrading systems like S-200 and we have tested it successfully using all our potential and experience in the Islamic Revolution Guards Corps (IRGC), the Army and the Defense Ministry," Brigadier General Mohammad Hassan Mansourian was quoted as saying. Full story