The man also threw grenades into a crowded square from a rooftop before killing himself, reports say.

The attacker was named as Nordine Amrani. He was known to police for firearms offences.Eyewitness Greg Ienco: "We saw the explosions and the panic, it was quite incredible"

Earlier reports said at least two more men were involved, but officials said the attacker acted alone. Terrorism was not a cause, they added.

Amrani was jailed for 58 months in September 2008 for possessing firearms and drugs, media reports said.

Officials did not confirm this, but said they were aware he had spent some time in prison.

Weapons in a bag 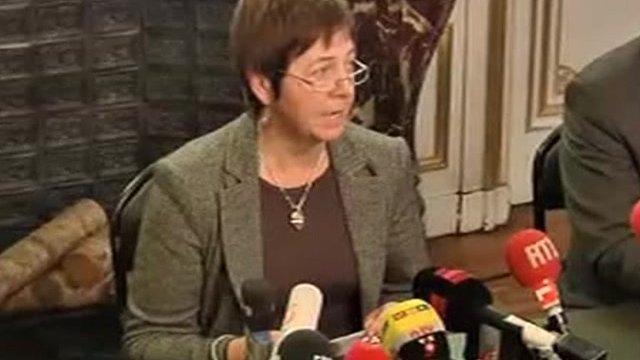 Amrani had been asked to come for an interview at a police station in connection with charges against him.

A resident of Liege, he left home with a rifle, a pistol and three grenades in a bag, prosecutors said.

Greg Ienco, a journalist at local newspaper La Meuse-Liège, described the scene of the attack.

"We saw four explosions. I was in a building 200m from Saint-Lambert Square," he said.

"It was quite incredible. We saw one man on the roof who tried to kill people. This man killed himself with a grenade." 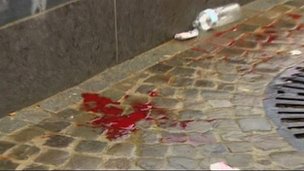 TV pictures showed blood on the cobblestones of the square

TV images showed blood splattered across the cobblestones of the square.

Doctors at a city hospital are trying to save the life of an 18-month-old child injured in the attack. Several others are reported to be in a serious condition.

Medical staff at a field hospital at the scene treated 52 of the injured. Some others made their own way to other hospitals.

Roads into the centre of Liege were sealed off but vehicles are now coming back into the city.

Explosives experts were called in to search the area for unexploded grenades. People were initially told to stay in buildings but are now returning to the streets.

Place Saint Lambert is a busy intersection, served by hundreds of buses daily. It hosts an annual Christmas market which attracts some 1.5 million visitors a year.

Are you in Liege? Did you witness what took place? Send your experiences to the BBC using the form below.

Amrani had been summoned for police questioning today but the reason for the questioning was not clear. He still had a number of grenades with him when he died. He left his home in Liege with a backpack, armed with hand grenades, a revolver and an assault rifle. He walked alone to the central square, then got on to a platform that gave him a view of the square below, with a huge Christmas tree and crowded with shoppers. From there, Amrani lobbed three hand grenades towards a bus shelter, which serves 1,800 buses a day, then opened fire on the crowd. The explosions sent glass from the bus shelter across a wide area. Witness Dimitri Degryse said: "I heard a loud boom. I thought it was something on my car that was broken or something. Then a few seconds after, a second boom, and I saw all the glass breaking, I saw people running, screaming." As soon as the shooting began, hundreds of people fled the square, as well as a Christmas market in an adjacent square, rampaging through old city streets looking for cover.

Video from the scene showed people, including a large group of children, fleeing the city centre, some still carrying shopping bags. As police hunted for possible accomplices, residents were ordered to stay in their homes or seek shelter in shops or public buildings. A medical post was set up in the nearby courtyard of the Prince Bishops courthouse. Dozens of emergency vehicles took victims away for treatment. Police closed off the area but found no accomplices and calm returned after a few hours. The Place Saint-Lambert and the nearby Place du Marche host Liege's annual Christmas market, which consists of 200 tiny shops and attracts some 1.5 million visitors a year.

By dusk, with the Christmas lights gleaming again, King Albert II and Queen Paola came to pay their respects, as did prime minister Elio Di Rupo.

Place Saint-Lambert is a busy crossroads. Every day 1,800 buses serve the square, which leads to central shopping streets.

The Place Saint-Lambert and the nearby Place du Marche host the Liege's annual Christmas market which consists of 200 retail cabins and attracts some 1.5 million visitors a year.

NEWS.com.au - ‎6 minutes ago‎
At least four people have been killed and more than 70 injured in a grenade and gun attack in Belgium. Four people were killed when a gunman opened fire opened fire on a busy square in Belgium. Picture: AFP Source: AFP Police secure the area at the ...

eTaiwan News - ‎7 minutes ago‎
AP A man armed with grenades and an assault rifle attacked holiday shoppers Tuesday at a central square in the Belgian city of Liege. Five people died, including the attacker, and 122 others were wounded, officials said. ...

BBC News - ‎8 minutes ago‎
A gunman has opened fire in the centre of the Belgian city of Liege, killing at least four people and wounding 123. The man also threw grenades into a crowded square from a rooftop before killing himself, reports say. He was named as Nordine Amrani, ...

San Francisco Chronicle - ‎18 minutes ago‎
Dec. 13 (Bloomberg) -- A grenade-tossing suicide attacker in the Belgian city of Liege today left at least four people dead and 132 injured. The victims included "a 15-year-old -- a young boy who died on the spot -- a 17-year-old and a 75-year-old ...

Baby among dead as gunman fires at Belgian shoppers

TVNZ - ‎24 minutes ago‎
A baby has died of her injuries after a man hurled grenades at a bus stop in the Belgian city of Liege and sprayed gunfire at crowds of Christmas shoppers. Doctors had fought for several hours to save the 18-month-old girl who was killed when the ...

BBC News - ‎34 minutes ago‎
A convicted 33-year-old man armed with a gun and hand grenades has attacked a city centre in Belgium, killing at least three people. The attack in the early afternoon was near the Christmas market in Liege. During a news briefing, the city prosecutor ...

Mirror.co.uk - ‎42 minutes ago‎
By Mirror.co.uk 13/12/2011 An armed gang was being hunted today after killing two people with grenades and guns in an apparently random attack on a Christmas market in the Belgian city of Liege. At least a dozen other bystanders were injured in the ...

Times LIVE - ‎48 minutes ago‎
Three people were killed and 123 wounded yesterday when a man hurled a grenade at a bus stop in Liege, Belgium, and sprayed gunfire at a square crowded with Christmas shoppers and children before turning the gun on himself. ...

Herald Sun - ‎49 minutes ago‎
A gunman armed with grenades opened fire on a square packed with children and Christmas shoppers in Belgium. Four people were killed in the shooting at a busy square in Liege, Belgium. Picture: AFP Source: AFP Police secure the area at the Place ...

Herald Sun - ‎49 minutes ago‎
A 17-month-old baby has died of wounds suffered during a Belgian shooting spree, a hospital in the eastern city of Liege has announced. The child, who died today, became the fourth victim of lone gunman Nordine Amrani, who also died in unclear ...

The Press Association - ‎49 minutes ago‎
David Cameron has passed on Britain's sympathies after a gunman went on the rampage in Belgium, killing at least three people and injuring scores more. The attacker opened fire in the centre of Liege, and threw grenades into a crowded square before ...

Telegraph.co.uk - ‎55 minutes ago‎
People lie wounded and in shock after lone gunman spread terror in the Belgian city of Liege, opening fire and throwing hand grenades onto a square packed Christmas shoppers. The killer was named as Nordine Amrani, 33, a known criminal and gun-lover ...

Times LIVE - ‎1 hour ago‎
Rescuers wait at the Place Saint Lambert square where two men threw explosives in the city center of the Belgian city of Liege December 13, 2011. The men threw multiple explosives towards a bus stop (up), killing two people including one of the ...

Reuters Africa - ‎1 hour ago‎
LIEGE, Belgium (Reuters) - A man hurled grenades at a bus stop in the Belgian city of Liege and sprayed gunfire at crowds of Christmas shoppers and children on Tuesday, killing three people and wounding 123 before fatally shooting ...

News of the world in photos: Grenade attack in Belgium and more

BBC News - ‎1 hour ago‎
A man has opened fire in the Belgian city of Liege, killing at least four people, including himself and wounding more than 100 in a gun and grenade attack. Greg Ienco, a journalist at local paper La Meuse-Liège, which has its offices 200 metres from ...

Sky News Australia - ‎1 hour ago‎
A gunman armed with grenades has opened fire on a square packed with children and Christmas shoppers in the eastern Belgian city of Liege, killing three people and wounding 75. Officials named the gunman, who was himself also killed in circumstances ...

RT - ‎1 hour ago‎
A grenade attack has killed four people and injured 123 on Tuesday in the eastern Belgian city of Liege, according to media reports quoting police sources. Although accounts differ, local authorities are now saying there was only one assailant. ...

Los Angeles Times - ‎1 hour ago‎
REPORTING FROM LONDON –- A gunman with a history of drugs and arms offenses hurled grenades and sprayed bullets into a crowded square of Christmas shoppers in eastern Belgium on Tuesday, killing at least three people and injuring scores of others, ...

New York Times - ‎1 hour ago‎
Police officers surrounded a body at Saint Lambert Square in Liège where a man threw explosives on Tuesday. By JAMES KANTER LIÈGE, Belgium — A man with a history of run-ins with the law lobbed three hand grenades and opened fire at a crowded central ...

The Australian - ‎2 hours ago‎
NORDINE Amrani, the lone gunman who died after killing three people and injuring scores in a crowded Belgian square, had a long criminal record but not of mental instability. The 33-year-old Amrani was well known to the police before he went on the...

Man goes on rampage in Belgium with guns, grenades

TODAYonline - ‎2 hours ago‎
LIEGE (Belgium) - A man armed with hand grenades and guns yesterday opened fire and threw explosives at shoppers at a Christmas market in the city centre square, killing a 75-year-old woman and two teenagers and wounding at least 75 people - before ...

Reuters - ‎2 hours ago‎
1 of 5. Police officers surround a dead body at the Place Saint Lambert square where a man threw explosives in the city center of the Belgian city of Liege December 13, 2011. By Ben Deighton LIEGE, Belgium (Reuters) - A man hurled grenades at a bus ...

The Guardian - ‎2 hours ago‎
A convicted gun fanatic threw hand grenades and opened fire on a square bustling with Christmas shoppers in the centre of the Belgian city of Liège, killing at least six people, including himself, and wounding dozens, some critically. ...

Christian Science Monitor - ‎2 hours ago‎
Liege attack in Belgium appears to have been carried out by a lone gunman using grenades and automatic weapons. By Whitney Eulich / December 13, 2011 Emergency vehicles are parked in front of the court of justice following a grenade attack in the city ...

4 Killed, 123 Wounded in Attack in Belgium

Voice of America (blog) - ‎2 hours ago‎
Four people have been killed and 123 others wounded in an attack carried out by a gunman in the eastern Belgian city of Liege. Belgian officials say the gunman lobbed hand grenades and fired a rifle at a bus stop in Saint Lambert Square, ...
*Link for This article compiled by Roger Smith from reliable sources BBC News
*Speaking Image - Creation of DTN News ~ Defense Technology News
*This article is being posted from Toronto, Canada By DTN News ~ Defense-Technology News
Contact:
dtnnews@ymail.com