Source: DTN News - - This article compiled by Roger Smith from reliable sources By C. J. Chivers for The New York Times(NSI News Source Info) TORONTO, Canada - July 18, 2012: To escape the government he served until it gave him an order he could not obey, Capt. Akhmed Trad, a pilot in Syria’s air force, needed a plan: how to spirit himself over a border quickly, and leave no family behind. 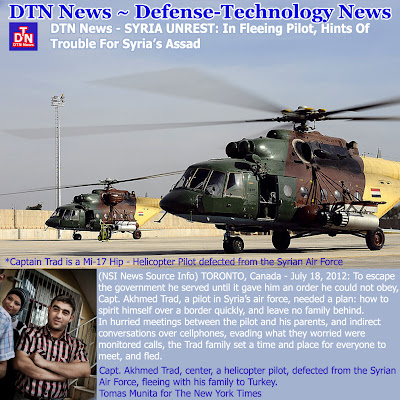 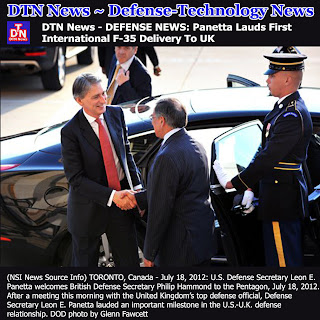 Tomorrow in Fort Worth, Texas, British Defense Secretary Philip Hammond will take the first international delivery of an F-35 Joint Strike Fighter, Panetta told reporters at a Pentagon news conference alongside his British counterpart.
“The United Kingdom was the first partner nation to join the F-35 program and has been a tremendous partner throughout the development, testing, and the initial production,” the secretary added.
Hammond, who joined Panetta for a working breakfast, said, “I look forward to seeing [the supersonic stealth fighter] in operation later on today at [Naval Air Station Patuxent River in Maryland] and then picking up our first test aircraft tomorrow … at Fort Worth.”
The aircraft’s multiyear system development and demonstration period involves development and testing of the entire aircraft system, including its manufacture.
Along with the United States and the United Kingdom, other nations partnering in this phase of F-35 development are Italy, the Netherlands, Turkey, Canada, Denmark, Norway and Australia. As partners, the countries can bid for work and participate in the aircraft’s development.
Israel and Singapore agreed to join the program as security cooperation participants, entitled to delivery priorities, certain program information and country-specific F-35 technical studies.
“The United Kingdom was the first partner nation to join the F-35 program and has been a tremendous partner throughout the development, testing and initial production,” Panetta told reporters.
“I'm pleased by the significant progress that the program has made across all the service variants, particularly in the past year,” he said, adding that despite a long road still ahead, progress is being made in testing and stabilizing future F-35 production and sustainment plans.
“The F-35 represents, I believe, the future of tactical aviation for both of our armed services,” Panetta said. “This advanced aircraft's air superiority, its precision strike capability will help ensure our dominance of the skies for years to come.”
Hammond said the British armed forces will continue close collaboration with the United States as its most important defense relationship, building on the shared experience of a decade fighting together in Iraq and Afghanistan.
“Our wide-ranging intelligence relationship, our joint work on the F-35B, regenerating the U.K.'s carrier strike capability, and of course the work on the nuclear deterrent and the common missile compartment -- all [are] crucial keystones of our relationship,” he said.
Hammond added that he has assurances at the highest levels that the F-35 program is now on track and doing very well.
“It went through a period 18 months or so ago when it was placed on probation because of some technical difficulties [but] it's come out of those,” he said.
The aircraft’s B variant now has clocked more than 1,000 hours of flying time and the U.S. Marine Corps is successfully flying it from ships, Hammond said.
He said the U.S. Defense Department has been “massively supportive of [the project] and is providing us with all sorts of facilities to maintain and regenerate our capabilities to operate a carrier flight deck and to maintain the skills in our pilots, many of whom are now flying with the U.S. Navy and Marine Corps to keep those skills alive.”
Panetta said he’s made it clear that the F-35 fighter plane is critical to a future defense strategy that depends on agility, flexibility and the ability to stay on the cutting edge of technology.
“We're committed to all three [F-35] variants because we think each of the forces will be able to use that kind of weaponry for the future so that we can effectively control the skies as we confront the enemies of tomorrow,” Panetta said.
The secretary said he’s confident “that we're going to be able, working with industry, working with Congress, to meet our full commitment with regards to the joint strike fighter.”
*Link for This article compiled by Roger Smith from reliable sources By Cheryl Pellerin - American Forces Press Service*Speaking Image - Creation of DTN News ~ Defense Technology News *This article is being posted from Toronto, Canada By DTN News ~ Defense-Technology News Contact:dtnnews@ymail.com ©COPYRIGHT (C) DTN NEWS DEFENSE-TECHNOLOGY NEWS