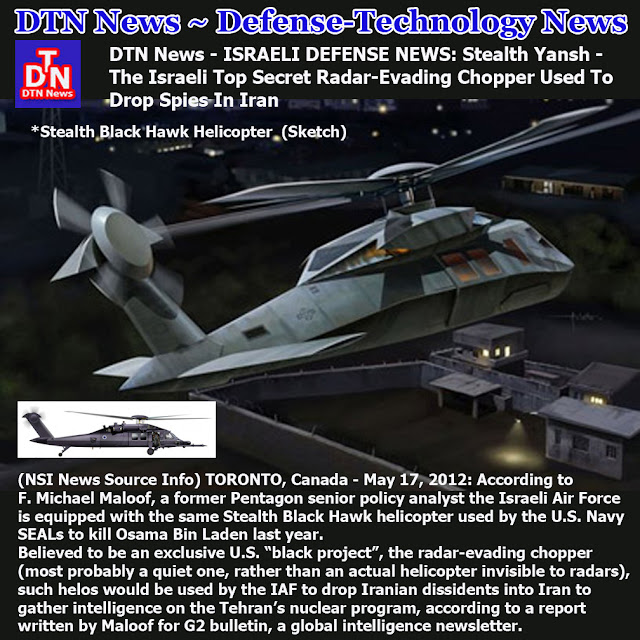 Believed to be an exclusive U.S. “black project”, the radar-evading chopper (most probably a quiet one, rather than an actual helicopter invisible to radars), such helos would be used by the IAF to drop Iranian dissidents into Iran to gather intelligence on the Tehran’s nuclear program, according to a report written by Maloof for G2 bulletin, a global intelligence newsletter.
This is the first time someone reports about radar-evading choppers in the hands of Israel.
Even if it’s quite unlikely that the Washington shared the secrets of its most advanced helicopter with Jerusalem, considered that the American Stealth Hawk is probably based on 1978 study freely available on the Internet, we can’t rule out the possibility that the Israeli industry has found a way to modify the IAF Black Hawks (nicknamed “Yanshuf”, English for “Owl”) to make them stealthy.
Provided a Stealth Yanshuf really exists, this is what it would look like in two updated versions of the renderings I conceived with AviationGraphic.com‘s Ugo Crisponi: above, the famous highly modified version with retractable landing gear MH-X (please remember this is not the actual designation), whose shape reminds the one of an S-76; below, the more likely slightly-modified Stealth Black Hawk (described here). Source: DTN News - - This article compiled by Roger Smith from reliable sources By David Axe - Wired(NSI News Source Info) TORONTO, Canada - May 17, 2012: The second copy of China’s stealth fighter prototype has just flown at a research facility in the city of Chengdu. The first flight of the J-20 Mighty Dragon with the nose number 2002 doubles Beijing’s stealth test fleet at a time when America’s latest jet fighters are hobbled by cost overruns, labor disputes and lethal design flaws. But it’s far from certain how much, and how fast, the new Chinese jet will alter the military balance. 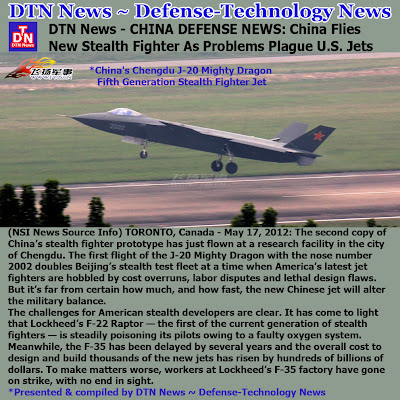 The challenges for American stealth developers are clear. It has come to light that Lockheed’s F-22 Raptor — the first of the current generation of stealth fighters — is steadily poisoning its pilots owing to a faulty oxygen system. Meanwhile, the F-35 has been delayed by several years and the overall cost to design and build thousands of the new jets has risen by hundreds of billions of dollars. To make matters worse, workers at Lockheed’s F-35 factory have gone on strike, with no end in sight.

At first glance, China appears to be making huge progress where the U.S. falters. The twin-engine Mighty Dragon 2002, painted black like its predecessor, made its first appearance in April in photos snapped by Chinese bloggers (who may or may not be on Beijing’s payroll). The second J-20 spent a month or so performing ground tests before launching on its inaugural test sortie sometime in the past few days. If the initial flight of the first Mighty Dragon (nose number 2001) in December 2010 is any indication, 2002′s debut mission amounted to little more than a lap around the Chengdu airfield to test the aircraft’s basic functions and show off for the aforementioned bloggers.

With two airframes to work with, the Chengdu engineers can now double the roughly five-flights-a-month development program apparently aimed at producing a front-line stealth warplane. Before the first Mighty Dragon ever flew, General He Weirong of the Chinese People’s Liberation Army Air Force said the J-20 would enter service between 2017 and 2019. Then-U.S. Secretary of Defense Robert Gates countered, saying it would be 2020 or later before China possessed a combat-ready stealth fighter. It’s unclear who’s right — or even what definition of front-line service either man was using.
Certainly, the Mighty Dragon’s engineers have a lot of work ahead of them. For comparison, the development program for the U.S. military’s latest F-35 Joint Strike Fighter includes more than 10,000 test flights spread over 15 years. If China duplicated the American testing profile, it could take decadesfor the J-20 to complete development.
But China traditionally does not take the same approach to warplane testing that America does. Instead, China follows the Russian model: some basic tests after which small numbers of new jets with rudimentary combat capabilities are handed over to a regular fighter squadron. After a few years of real-world use, engineers build a second batch with improved capabilities, and so on.
In that way China usually builds its aerial arsenal in small increments in parallel with testing. On the upside, new designs can enter service faster than they do in America. The downside is that the new fighters often fly with undetected flaws. The U.S. initially tried that “concurrent” approach with the Lockheed Martin-built F-35, only to scale back early production after testers discovered design flaws costing billions of dollars to fix. The J-20 could encounter the same problem.
Moreover, it seems both J-20s are still flying with Russian-made AL-31 engines rather than motors specifically designed for the J-20′s huge size and apparent weight. China has had so many problems inventing its own jet engines that it has revived imports of Russian models. Finalizing advanced avionics, sensors and weapons could prove equally difficult for the Chengdu developers.
All the same, Mighty Dragon 2002 does appear to be a step towards an early combat capability. It features several apparent improvements over its sister Mighty Dragon 2001, including stockier landing gear and a redesigned nose that could house an ultra-modern electronically scanned radar. If Beijing chooses to build a squadron of J-20s for early front-line use, they could look a lot like jet number 2002.
That said, there are signs China is cooling its stealth-fighter ambitions. Until recently, analysts had predicted the J-20 would be joined by several other brand-new Chinese stealth fighter designs, including one code-named J-16. But this spring reporters got their first look at the J-16. Turns out it’s a bolt-for-bolt copy of the Russian Su-30, a decidedly non-stealthy design.
That should prove comforting to American warplane developers who are in the throes of parallel crises involving the F-22 and F-35. Which is to say, China’s stealth fighter development is faring no better and no worse than America’s. For every big step forward there are little steps back.
*Link for This article compiled by Roger Smith from reliable sources By David Axe - Wired*Speaking Image - Creation of DTN News ~ Defense Technology News *This article is being posted from Toronto, Canada By DTN News ~ Defense-Technology News Contact:dtnnews@ymail.com ©COPYRIGHT (C) DTN NEWS DEFENSE-TECHNOLOGY NEWS

DTN News - TECHNOLOGY NEWS: How Facebook Took Over The Web

DTN News - TECHNOLOGY NEWS: How Facebook Took Over The Web*New data from Nielsen reveals how Facebook grew to become the dominant social network it is today.

Source: DTN News - - This article compiled by Roger Smith from reliable sources By Lance Whitney - Cnet News(NSI News Source Info) TORONTO, Canada - May 17, 2012: Facebook is on its way to 1 billion users with an IPO around the corner. Not bad for a company with its roots in a Harvard dorm room. 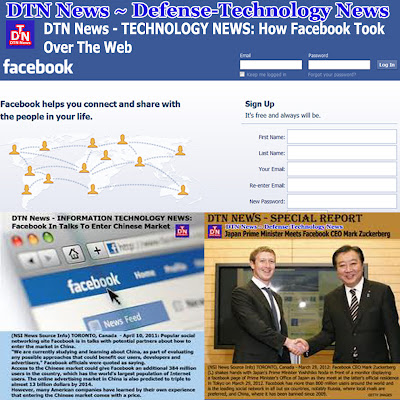 But how did it achieve its grip on the global market? New findings from Nielsen offer a peek into some key milestones for the social network.
Facebook's user base currently numbers more than 900 million. But it's also one of the most visited Web sites in the world, according to Nielsen.
The site received around 152 million unique visits from people in the U.S. in March, which means that more than two out of three online Americans checked out Facebook that month. In such countries as Brazil, Italy, and New Zealand, the rate is even higher.
Facebook first grabbed 10 million unique U.S. visitors in November 2006 and 10 million unique U.K. visitors in April 2008. The site captured 10 million unique visitors in France, Germany, and Spain in 2009, Nielsen said.
In August of last year, Facebook surpassed Orkut as the top social network in Brazil and has continued to grab more users in the country since then. MySpace was also once a hot social network. But in January 2009, Facebook officially surpassed MySpace at the top social network and has held that title since.
Facebook is currently ranked top among all social networking and blog sites in 11 of 12 major countries around the world. The following table from Nielsen shows Facebook's reach in those 12 countries.

(Credit: Nielsen)
Of course, not everyone is a fan of the giant social network.
Half of the 1,000 Americans recently polled by the AP and CNBC believe Facebook is a fad. General Motors revealed this week that it was yanking its advertising on the network because it didn't think the ads were effective.
Concerns have also been raised about the company's move to go public. Half of the people in the AP-CNBC poll think the initial offering price is too high. Many also question whether CEO Mark Zuckerberg has the skills to manage and expand a large publicly-traded company.

And the company has consistently gotten into deep water over privacy issues, angering users and advocacy groups.
Only 13 percent of the people polled by AP and CNBC trust Facebook "completely" or "a lot" to keep their personal information private. More than half (59 percent) said they have little or no faith in the company to protect their privacy.
Facebook has made tremendous strides since its birth in 2004. But the company will face more challenges ahead as it strives to grow both as a social network and a public corporation.