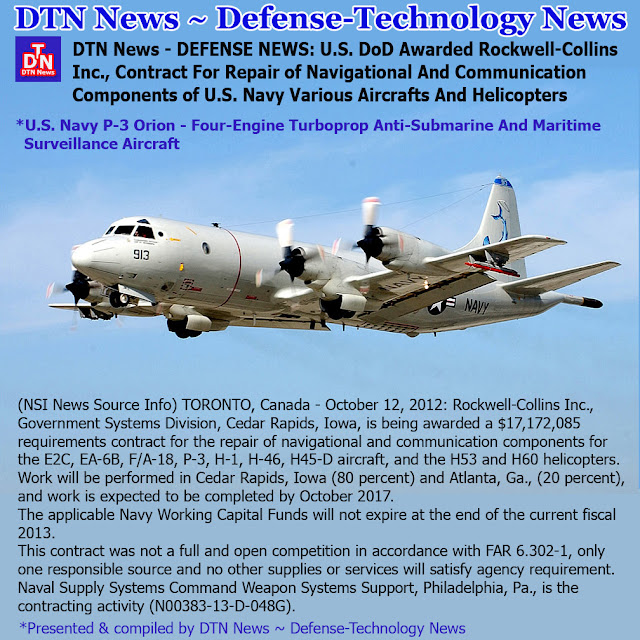 Work will be performed in Cedar Rapids, Iowa (80 percent) and Atlanta, Ga., (20 percent), and work is expected to be completed by October 2017.

The applicable Navy Working Capital Funds will not expire at the end of the current fiscal 2013.

This contract was not a full and open competition in accordance with FAR 6.302-1, only one responsible source and no other supplies or services will satisfy agency requirement. 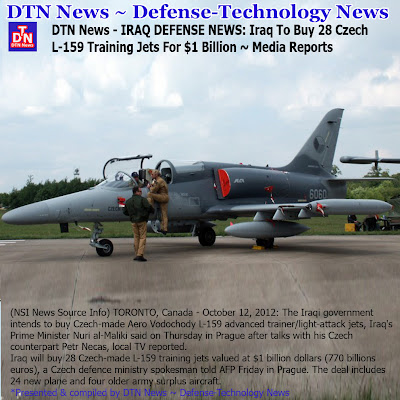 "Further talks about purchasing the L-159 will take place on Friday between the Iraqi and Czech defense ministries," he said. Talks about an L-159 purchase between Baghdad and Prague have been underway for at least three years, acording to Defense Industry Daily.

The Czech government hopes to sell Iraq up to 24 of the jets, which Defense Industry Daily says are used aircraft which were operated for a short time by the Czech Air Force. Iraq used to operate the jet's predecessor, the L-39 Albatros.

The L-159 can be armed with Sidewinder missiles, targeting pods and laser-guided air-to-surface weapons, and can operate from austere airstrips, the daily says.

The L 159A is a single-seat light multi-role combat aircraft designed for a variety of air-to-air, air-to-ground and reconnaissance missions. The aircraft is equipped with a multi-mode Doppler Grifo-L radar (a variant of the Grifo-F x-band multi-mode, pulse-doppler radar), for all-weather, day and night operations. It can carry a wide range of NATO standard stores including air-to-air and air-to-ground missiles and laser guided bombs. The L 159A is in operational service with the Czech Air Force and in production.

The L 159B is a two-seat derivative of the L159A primarily designed for Advanced and Operational/Lead-In Fighter Training. The L 159B configuration can also be tailored to customer specific requirements and adapted to needs of basic training as well as combat missions including air-to-Ground, patrol and reconnaissance missions.