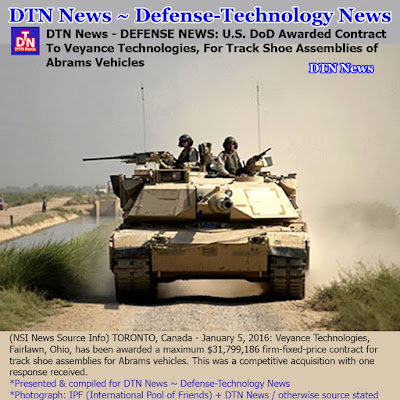 This is a one-year contract with no option periods. Location of performance is Ohio, with a Jan. 3, 2017, performance completion date. Using military service is Army. Type of appropriation is fiscal 2016 through fiscal 2017 Army working capital funds.

Brief Highlights on Abrams Vehicles;
The M1 Abrams is an American third-generation main battle tank produced by the United States. It is named after General Creighton Abrams, former Army Chief of Staff and Commander of U.S. military forces in the Vietnam War from 1968 to 1972. Highly mobile, designed for modern armored ground warfare, the M1 is well armed and heavily armored. Notable features include the use of a powerful multifuel turbine engine, the adoption of sophisticated composite armor, and separate ammunition storage in a blow-out compartment for crew safety. Weighing nearly 68 short tons (almost 62 metric tons), it is one of the heaviest main battle tanks in service.

The M1 Abrams entered U.S. service in 1980, replacing the M60 tank. It served for over a decade alongside the improved M60A3, which had entered service in 1978. The M1 remains the principal main battle tank of the United States Army and Marine Corps, and the armies of Egypt, Kuwait, Saudi Arabia, Australia and Iraq. 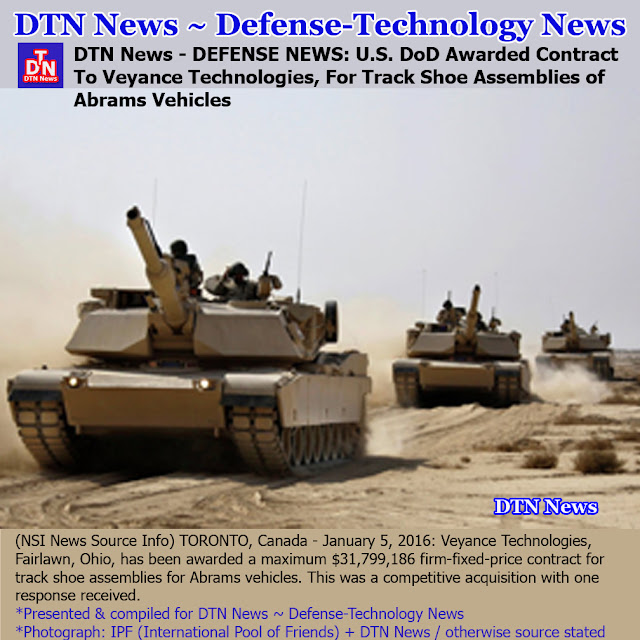 Three main versions of the M1 Abrams have been deployed, the M1, M1A1, and M1A2, incorporating improved armament, protection and electronics. These improvements and other upgrades to in-service tanks have allowed this long-serving vehicle to remain in front-line service. In addition, development for the improved M1A3 version has been known since 2009

Raytheon Missile Systems, Tucson, Arizona, was awarded a $66,593,457 firm-fixed-price contract on Dec. 31, 2015, for fiscal 2016 Navy Rolling Airframe Missile (RAM) Block 2 guided missile round pack requirements.  The RAM guided missile weapon system is co-developed and co-produced under an international cooperative program between the U.S. and the Federal Republic of Germany.  RAM is a missile system designed to provide anti-ship missile defense for multiple ship platforms.  This contract is to procure material, fabricate parts, assemble and test, and deliver RAM Block 2 MK 44 Mod 4 guided missile round packs.  This contract includes options which, if exercised, would bring the cumulative value of this contract to $142,825,203, and also includes an option for foreign military sales to Japan.  Work will be performed in Tucson, Arizona (49.1 percent); Ottobrunn, Germany (41.2 percent); Rocket Center, West Virginia (8.5 percent); and Andover, Massachusetts (1.2 percent), and is expected to be completed by February 2018.  Fiscal 2016 weapons procurement (Navy) funding in the amount of $66,593,457 is being obligated at time of award, and no funds will expire at the end of the current fiscal year.  This contract was not competitively procured in accordance with 10 U.S. Code 2304(c)(4), international agreement.  The Naval Sea Systems Command, Washington, District of Columbia, is the contracting activity (N00024-16-C-5400).

Syn-Tech Systems Inc., Tallahassee, Florida (N65236-16-D-1002), is being awarded a $17,863,377 indefinite-delivery/indefinite-quantity, commercial, firm-fixed-price contract for fuel management systems (FuelMaster) support services to include technical support, procurement, installation, and sustainment capabilities for existing FuelMaster automated fuel service station; automated data collection/fuel dispensing system; automated point of sale device; and automotive information module second generation equipment at more than 507 sites worldwide.  This contract includes options which, if exercised, would bring the cumulative value (ceiling) of the contract to an estimated $91,929,442.  Work will be performed worldwide.  Work is expected to be completed by January 2017.  If all options are exercised, work could continue until January 2022.  Fiscal 2016 working capital funds (Navy) in the amount of $1,726,665 will be obligated at the time of award under the first task order; these funds will not expire at the end of the current fiscal year.  The contract was not competitively procured because it is a sole-source acquisition negotiated under 10 U.S. Code 2304(c)(1).  Space and Naval Warfare Systems Center Atlantic, Charleston, South Carolina, is the contracting activity.

A-P-T Research Inc., Huntsville, Alabama, is being awarded a $30,456,367 cost-plus-fixed-fee contract for advisory and assistance services for safety under the technical, engineering, advisory, and management support contracts.  This contract provides support for the development, implementation, sustainment, and execution of both Ballistic Missile Defense System (BMDS) and program-level safety policies, requirements, and programs; supports BMDS and program-level system safety risk identification and management processes; and supports safe conduct of system demonstration and simulation activities, to include flight and ground tests, at both the BMDS and program levels.  Work will be performed at Huntsville, Alabama; Dahlgren, Virginia; Albuquerque, New Mexico; Vandenberg Air Force Base, California; and Fort Greely, Alaska, with an expected completion date of December 2021.  Fiscal 2015 research, development, test and evaluation funds in the amount of $1,619,544; and 2016 Foreign Military Sales funds in the amount of $162,087, are being obligated at time of award.  This contract was a competitive awarded acquisition with two offers received.  The Missile Defense Agency, Huntsville, Alabama, is the contracting activity (HQ0147-16-C-0015).

Alion Science and Technology Corp., McLean, Virginia, has been awarded a $28,725,401 undefinitized modification (P00144) to previously awarded contract FA7014-07-C-0009 for the Secretary of the Air Force Acquisition office and joint program office for the F-35 program. Contractor will provide advisory and assistance services support. Work will be performed at Arlington, Virginia; and Bolling Air Force Base, District of Columbia, and is expected to be complete by June 30, 2016. Fiscal 2016 Office of the Secretary of Defense, and Air Force research, development, test and evaluation and operations and maintenance funds in the amount of $13,644,451 are being obligated at the time of award. Air Force District of Washington, Andrews Air Force Base, Maryland, is the contracting activity.

FedMedical Inc.,* Summerville, South Carolina, has been awarded a maximum $25,000,000 fixed-price with economic price adjustment contract for pulse oximeters, surgical lights and accessories. This was a competitive acquisition with 96 responses received. This is a five-year contract with no option periods. Location of performance is South Carolina, with a Jan. 4, 2021, performance completion date. Using military services are Army, Navy, Air Force, Marine Corps and federal civilian agencies. Type of appropriation is fiscal 2016 through fiscal 2021 defense working capital funds. The contracting activity is the Defense Logistics Agency Troop Support, Philadelphia, Pennsylvania (SPE2D1-16-D-0003).

DRS-NIS, Melbourne, Florida, was awarded a $16,492,821 firm-fixed-price, sole-source contract for the procurement of digital vehicle distribution box assembly repair and upgrades.  The assembly is a power distribution and control box for the automotive and diagnostic systems of the Bradley Fighting Vehicle.  Performance location(s) and funding will be determined with each order, with an estimated completion date of Dec. 30, 2022.  Bids were solicited via the Internet with one received.  Army Contracting Command, Tank and Automotive, Warren, Michigan, is the contracting activity (W56HZV-16-D-0028).

The Boeing Co., St. Louis, Missouri, has been awarded an $855,000,000 ceiling contract for T-38C avionics component integration and contractor logistics support.  The location of performance is St. Louis, Missouri; and Air Force and Navy bases located in Texas, Mississippi, Maryland, and Oklahoma. Work is expected to be completed by Jan. 3, 2026. This award is the result of a competitive acquisition and two offers were received. Fiscal 2015 research and development funds in the amount of $750,000 are being obligated at time of award. Air Force Life Cycle Management Center, Hill Air Force Base, Utah is the contracting activity (FA8211-16-D-0001).

SRA, Fairfax, Virginia, has been awarded a $35,432,915 firm-fixed-price and time-and-materials contract for the Distributed Common Ground System (AF DCGS) Processing, Exploitation, and Dissemination (PED) Operation Center. Contractor will manage, administer, and maintain the operational weapon system architecture supporting AF DCGS. The current AF DCGS PED architecture consists of an asynchronous transport mode network that successfully transports serial sensor bit streams, non-serial imaging sensors bit streams (both stills and full motion video), and imagery (still and motion), voice, avionics bit streams, and data as received from reconnaissance aircraft aloft overseas to various AF DCGS sites, where processing takes place. Work will be performed at Langley Air Force Base, Virginia, and is expected to be complete by Feb. 28, 2019. This award is the result of a competitive acquisition and four offers were received. Fiscal 2016 operations and maintenance funds in the amount of $1,537,357 are being obligated at the time of award. AMIC DET2/PK, Joint Base San Antonio, Texas is the contracting activity (FA7037-16-F-8001).

Veyance Technologies, Fairlawn, Ohio, has been awarded a maximum $31,799,186 firm-fixed-price contract for track shoe assemblies for Abrams vehicles. This was a competitive acquisition with one response received. This is a one-year contract with no option periods. Location of performance is Ohio, with a Jan. 3, 2017, performance completion date. Using military service is Army. Type of appropriation is fiscal 2016 through fiscal 2017 Army working capital funds. The contracting activity is the Defense Logistics Agency Land and Maritime, Warren, Michigan (SPRDL1-16-C-0035).

Lockheed Martin, Orlando, Florida, was awarded a $25,291,001 firm-fixed-price, foreign military sales contract to continue consolidated logistics support for the Office of the Program Manager – Saudi Arabia National Guard.  Work will be performed in Saudi Arabia, with an estimated completion date of Dec. 31, 2018.  Bids were solicited via the Internet with one received.  Fiscal 2015 other funds in the amount of $25,291,001 were obligated at the time of the award.  Army Contracting Command – Program Manager Saudi Arabia, is the contracting activity (W90BRJ-16-C-0005).

Exelis Inc., Clifton, New Jersey, is being awarded a $7,628,203 firm-fixed-price, indefinite-delivery/indefinite-quantity, long-term contract for repair of weapons replaceable assemblies used in support of the Integrated Defensive Electronic Countermeasures program.  This contract includes a two-year base and three one-year option periods, which if exercised, will bring the contract value to $28,482,500.  Work will be performed in Clifton, New Jersey, and is expected to be completed by December 2017.  If all options are exercised, work will continue through December 2020.  No funds will be obligated at the time of award.  Working capital funds (Navy) will be obligated as individual delivery orders are issued.  No funds will expire at the end of the current fiscal year.  This contract was not competitively procured in accordance with Federal Acquisition Regulation 6.302-1, with one offer received in response to this solicitation.  Naval Supply Systems Command Weapon Systems Support, Philadelphia, Pennsylvania, is the contracting activity (N003831-16-D-002P).