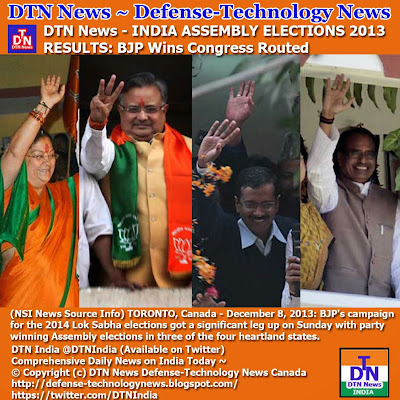 (NSI News Source Info) TORONTO, Canada - December 8, 2013: Congress party's 0-4 mauling and BJP's triumph in three states in what was billed as the "semifinal" for the 2014 elections was the big headline, but the central takeaway on super Sunday was Aam Aadmi Party's stunning debut in Delhi, prising open space in national politics for an outsider.

Congress's debacle exposed its sliding popularity as well as Rahul Gandhi's failure to connect with the voters. It has also fortified the perception of Narendra Modi-led BJP being the frontrunner for 2014. For all practical purposes, the UPA government will now be a lame duck one.

The BJP won a three-fourth majority in Rajasthan, scored a two-third victory in Madhya Pradesh and beat back Congress in Chhattisgarh after a ding-dong battle. In Delhi, only AAP prevented BJP from a clear victory, but its tally of 31 still underscored its advantage over Congress which crumbled to a measly eight seats.

The clear man of the match was AAP's Arvind Kejriwal. He not only beat Sheila Dikshit by a margin of over 25,000 votes, his party fed off a deep disillusionment with the political class, boosting hopes of a new brand of politics, perhaps a desi version of the Arab Spring.

As a result, the spunky rookie subverted traditional assumptions about vote banks by drawing support from diverse socio-economic strata. AAP finished second to the BJP, but the victory of its greenhorn candidates over heavyweights belonging to Congress and BJP was reminiscent of the waves of 1977 and 1984, a feat that would encourage it to go beyond Delhi in 2014.

Predictably, there was a debate over how much the Modi factor impacted the BJP landslides in Rajasthan and Madhya Pradesh and in Chhattisgarh. Party insiders insisted Modi was a strong force multiplier and that in Delhi, he helped it emerge as the single-largest party.

Whatever the case, the result can only add to Modi's aura and provide BJP tailwind as it heads for the LS challenge. The fact that Congress succumbed to incumbency and crashed to humiliating defeats in Rajasthan and Delhi whereas BJP held its own in MP and Chhattisgarh would be cited to argue that something beyond "local issues" was in play here.

Both Sonia Gandhi and Rahul Gandhi acknowledged the role of larger factors in Congress defeats. But they said Gehlot's and Dikshit's losses were baffling, given their good governance records.

Sonia spoke of inflation, one of the many issues that Modi will exploit in 2014 when he, with his tantalizing promise of a decisive leader and much-trumpeted Gujarat model of development, will be in the fray himself, seeking to tap into the same yearning for change which helped Kejriwal in Delhi.

Rahul Gandhi acknowledged that there was a lesson in AAP's dramatic debut and said "aggressive changes" would now be carried out in the Congress to "embed" the common man in Congress programmes. 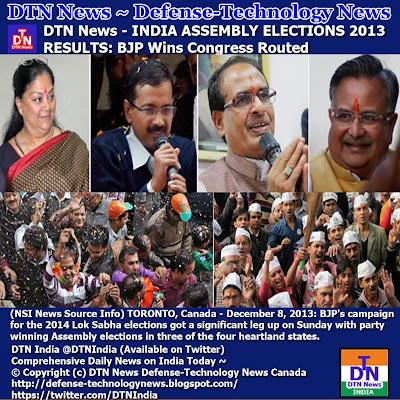 Media reports have so far identified the two sunken ships as the 60-meter long, 375-ton Hainan-class Submarine Chaser No. 233, and an undisclosed 100 to 200-ton North Korean patrol boat. 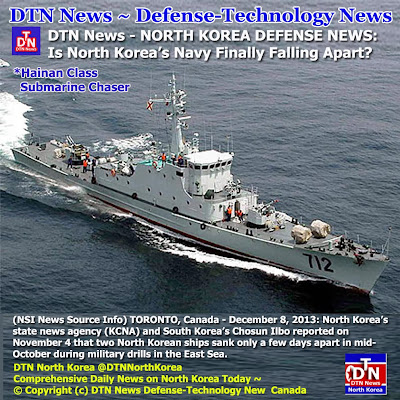