DTN News: Indian Coast Guard Two Hi-Tech Hovercraft To Be Based At Chennai

DTN News: Indian Coast Guard Two Hi-Tech Hovercraft To Be Based At Chennai

Source: DTN News - - This article compiled by Roger Smith from reliable sources
(NSI News Source Info) NEW DELHI, India - August 23, 2010: With 12 more hovercraft likely to be inducted in the Coast Guard in next three years, the agency's eastern region is likely to purchase two such craft and base them off Chennai to improve security along the coastline.

The Coast Guard already has six hovercrafts and 12 more are under construction. Out of these, the Coast Guard's eastern region is planning to purchase two for Chennai, two for Rameswaram and two for Puducherry.

The cost of a hovercraft is approximately Rs8 crore. According to Coast Guard officials, the presence of hovercraft in Chennai will enhance the force's preparedness in meeting any eventuality, like the need for sudden evacuation in the shortest time.

Speaking to reporters after a demonstration on Hovercraft H-181's performance on Tuesday, Coast Guard Commandant Venu Madhav said, ''Hovercraft are best suited for law enforcement duties at sea for their ability to move at a relatively high speed over shallow water and on land during a hot pursuit, which a speedboat cannot do.''

''Of the Coast Guard's six hovercraft vessels, we have positioned two at western borders in Okha, two at Haldia, West Bengal, and another two at Mandapam,'' Madhav said. The H-181 hovercraft was brought to Chennai from Mandapam to provide additional security cover from seashore during the Independence Day celebrations.

Hovercraft have been utilised for landing troops from ship to land, to cruise over mined waters, passenger liners/freight carriers. In the military, these can be used for fast attack, assault missions, logistics support and also for mine clearances.

The craft moves on water and land as well on a cushion of air pressure. Because of its design, hovercraft can even manoeuvre over marshy land, desert and undulated surface, and can pass over an obstacle of a significant height. The hovercraft is powered by two 12 cylinder air-cooled turbo charged engines, and produces 800 horse power of thrust.

Madhav said the use of hovercraft had helped to reduce smuggling from the western borders and rescue fishermen lost at sea.

Frmer UN chief weapons inspector Hans Blix
The fact that Russia is supplying Iran with fuel is "very positive," as it demonstrates that Tehran could rely on foreign suppliers for its fuel need, Blix told the BBC on Sunday. The remarks came on the heel of similar claims by State Department spokesman Darby Holladay. Holladay acknowledged that the Iranian nuclear facility carries no risk of proliferation but stressed that launching the power plant "underscores that Iran does not need an indigenous enrichment capability if its intentions are purely peaceful." The west insists that Iran should exchange its low-enriched uranium abroad for fuel for a medical research reactor. However, Head of the Atomic Energy Organization of Iran (AEOI) Ali Akbar Salehi has rejected such claims. "Suppose we receive the required nuclear fuel for the plant from the Russians for the next ten years, what are we going to do for the next 30 to 50 years?" the Iranian nuclear point man queried on Saturday. Iranian officials have repeatedly said that they do not "trust" the West and cannot rely on it for nuclear fuel supply. Israel and its allies accuse Iran of pursuing a military nuclear program through its enrichment program. Tehran rejects the accusations, arguing that as a member of the International Atomic Energy Agency and a signatory to the Nuclear Non-Proliferation Treaty it has the right to peaceful nuclear energy
*This article is being posted from Toronto, Canada By DTN News ~ Defense-Technology News, contact: dtnnews@ymail.com
Related News

MP lauds Russia role in plant launch
An Iranian MP, lauding the fueling of Iran's Bushehr nuclear plant, has thanked Russia for exercising an independent policy and not being swayed by Western sanctions against Iran.
»Read more

'Bushehr fueling, new US failure'
Iran's Ambassador to Moscow Mahmoud Reza Sajjadi says the startup of the country's first nuclear power plant was another defeat for US diplomacy.
»Read more
'Iran attack equals Israel annihilation'
A top Iranian lawmaker warns Israel against a military strike on Iran's nuclear sites, saying any move against the country will lead to Israel's annihilation.
»Read more
Iran's nuclear plant fueling irks Israel
Israel, widely assumed to be the only regime with nuclear weapons in the Middle East, has called Iran's fueling of its Bushehr nuclear power plant "totally unacceptable.”
»Read more
Iran resolute to proceed with N-program
As Iran begins injecting fuel into the Bushehr power plant, it once again emphasizes that the country will go ahead with its peaceful nuclear activities.
»Read more
MP: Russia disproves Iran sanctions
A top Iranian lawmaker says participation of Russia in the startup of Iran's first nuclear power plant proves that Moscow does not believe in sanctions against Iran.
»Read more
Iran to buy radioisotopes from Russia
The director of the Atomic Energy Organization of Iran (AEOI) says Iran will buy radioisotopes from Russia to treat cancer and some other medical conditions.
»Read more
Posted by Defense-Technology News at 8/22/2010 09:06:00 PM No comments:

The USC is set to participate in the tender with its three shipyards including Zvezda Shipbuilding Company in the Russian Far East, St.Petersburg's Admiralteyskiye Verfi shipyard and the Yantar shipyard in Russia's Baltic exclave of Kaliningrad.

The Admiralteyskiye Verfi and Yantar shipyards will present a joint project with the Northern Design Bureau.

Foreign shipyards may also bid for the tender. Among the possible foreign equivalents to the Mistral are the Dutch Johan de Witt and the Spanish Juan Carlos, Kommersant said.

Regardless of which project the Defense Ministry chooses, the USC shipyards are ready to build the ship within 30 months, USC President Roman Trotsenko said.

The laser, housed aboard a modified Boeing 747-400 Freighter, was to intercept a simulated short-range ballistic missile during Sunday's tests, to be held off California's coast. The previous postponements took place in the past three weeks.

The laser, housed aboard a modified Boeing 747-400 Freighter, was to intercept a simulated short-range ballistic missile during Sunday's tests, to be held off California's coast.

"Trouble shooting indicates that a hot bypass valve on the aircraft is in an abnormal condition thus not allowing for proper component cooling," the agency said in a statement. "The team is evaluating the potential causes."

"A new date for the experiment will be set for the upcoming week," the statement reads.

As soon as a target is detected, a kilowatt-class solid state laser, the Track Illuminator, tracks the missile and determines a precise aim point.

The Beacon Illuminator, a second kilowatt-class solid state laser, then measures disturbances in the atmosphere, which are corrected by the adaptive optics system to accurately point and focus the high energy laser at its intended target.

Using a very large telescope located in the nose turret, the beam control/fire control system focuses the COIL beam onto a pressurized area of the boosting missile and holds it there until the concentrated energy compromises the structural integrity of the target, causing it to fail.

Labels: Flood Victims, Pakistan, Pakistan In Pictures Of The Day 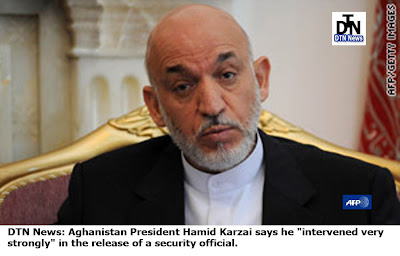 Afghan President Hamid Karzai confirmed Sunday that he engineered the release of Mohammed Zia Saleh, a top security official arrested earlier this year on suspicion of corruption. Karzai told the ABC program "This Week" that Saleh's arrest at his home evoked memories of the Soviet occupation of Afghanistan. "I have intervened," Karzai said. "I am the president of the country. I must uphold the constitution and do things legally." Karzai's commitment to ending chronic corruption in Afghanistan has been questioned due to incidents such as Saleh's release and the president's efforts to exert control over anti-corruption units set up with assistance from U.S. security agencies. "The bodies will stay to work, but they should be within the confines of the Afghan law, within the confines of the Afghan penal code, and within respect of human rights and should be sovereign Afghan bodies, not run or paid by any outside entities," Karzai said. He said he would announce on Monday "a new instruction to bring these two bodies in accordance with Afghan laws and within the sovereignty of the Afghan state." Karzai said he "intervened very strongly" in the Saleh case because "this man was taken out of his home in the middle of the night." Such a detention reminded the Afghan people of the Soviet occupation, Karzai said. "That case is already investigation," Karzai said. "Corruption should be handled most effectively and dedicatedly and with a lot of pressure, but it has to be across the board and apolitical and without vested foreign interest."
*This article is being posted from Toronto, Canada By DTN News ~ Defense-Technology News, contact: dtnnews@ymail.com Related News
Afghanistan News

4 US soldiers die in Afghanistan