Admiral Samuel Locklear told senior American politicians air strikes were designed to kill the Libyan leader, despite White House reassurances that this was not the aim. 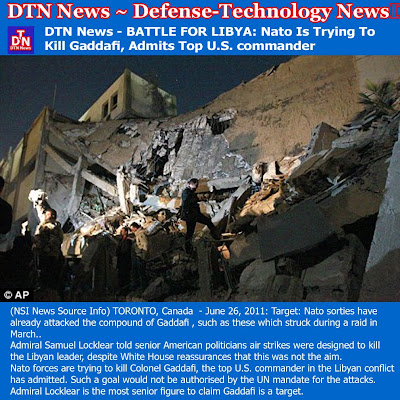 Nato forces are trying to kill Colonel Gaddafi, the top U.S. commander in the Libyan conflict has admitted.

Such a goal would not be authorised by the UN mandate for the attacks.

Admiral Locklear is the most senior figure to claim Gaddafi is a target.

Critics said the admission was further evidence of ‘mission creep’ and that Nato was breaking the rules of engagement.

Yesterday marked the 100th day since military action against the Libyan regime began. Eighteen nations including Britain, France and the U.S. have launched hundreds of air strikes in Libya to help rebels to overthrow Gaddafi.

Mike Turner, a member of the U.S. House Armed Services Committee, revealed that Admiral Locklear had told him removal of the dictator was on the table.

‘Admiral Locklear explained that the scope of civil protection was being interpreted to permit the removal of the chain of command of Gaddafi’s military, which includes Gaddafi.

‘He said that is the mission as Nato has defined. I believed we were targeting Gaddafi, but that confirmed it.

‘The scope that Nato is pursuing is beyond what is contemplated in civil protection, so they’re exceeding the mission.’

He added that Admiral Locklear, who heads the Allied Joint Force Command in Italy, had said publicly that a small force might have to go in on the ground to retain order if the rebels won. Target: Nato sorties have already attacked the compound of Gaddafi , such as these which struck during a raid in March

The revelation comes amid reports that Gaddafi is already considering leaving Libya for fear of his own safety.

His compound in the capital, Tripoli, has repeatedly been bombed and his son Saif and three of his grandchildren have been killed in air strikes.

Last week it emerged that the cost of the conflict to Britain had reached £260million, despite initial predictions that the bill would be ‘tens of millions’.

In the latest fighting, rebels in western Libya said they had advanced and were battling Gaddafi’s forces in Bir al-Ghanam, 50 miles south of the capital.