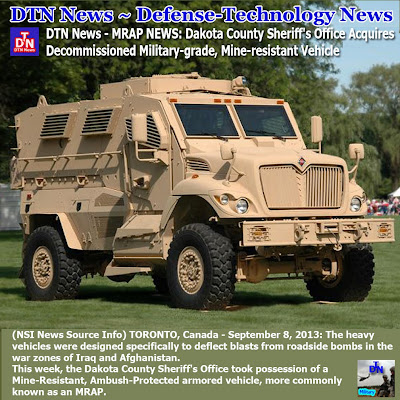 
"While they were designed with heavy armor to protect soldiers from the impact of IEDs, they will provide equal protection for law enforcement officers. After getting some refurbishment, we will assign the vehicle to the MAAG (SWAT) team," Bellows writes.
According to an article in the Washington Post, the U.S. military had about 24,000 of MRAPs at the start of this year, some of which have been scrapped as the war winds down. Each originally cost $1 million, the Post writes.
Some of them have been decommissioned by the military for use by civilian authorities, however. The MRAP delivered to the DCSO is just the first of 18 such vehicles, which will soon arrive in Minnesota for use by local law enforcement agencies. The Minnesota Department of Public Safety will distribute the vehicles over the next few months.