Source: DTN News - - by K. V. Seth - Special Report
(NSI News Source Info) NEW DELHI, India - November 6, 2010: The White House will, of course, stay in Washington but the heart of the famous building will move to India when President Barack Obama lands in Mumbai on Saturday. 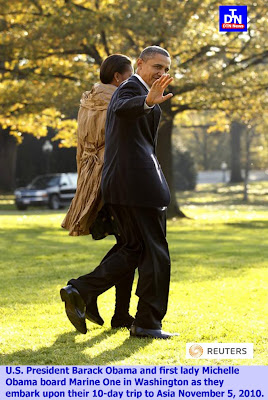 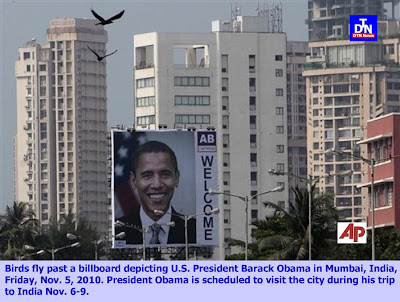 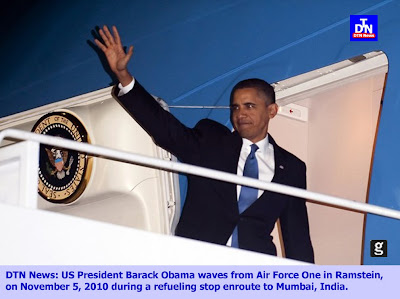 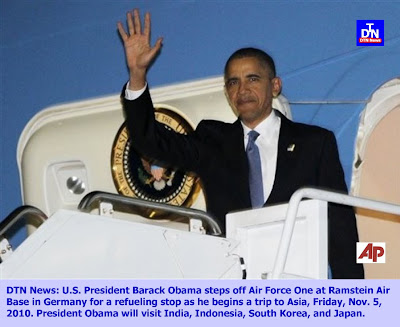 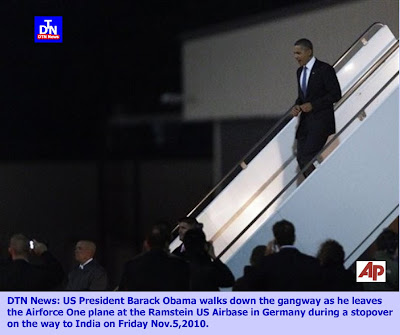 Communications set-up and nuclear button and majority of the White House staff will be in India accompanying the President on this three-day visit that will cover Mumbai and Delhi. He will also be protected by a fleet of 34 warships, including an aircraft carrier, which will patrol the sea lanes off the Mumbai coast during his two-day stay there beginning Saturday. The measure has been taken as Mumbai attack in 2008 took place from the sea. Arrangements have been put in place for emergency evacuation, if needed.
Obama is expected to fly by a helicopter -- Marine One -- from the city airport to the Indian Navy's helibase INS Shikra at Colaba in south Mumbai. Two jets, armed with advanced communication and security systems, and a fleet of over 40 cars will be part of Obama's convoy. Around 800 rooms have been booked for the President and his entourage in Taj Hotel and Hyatt.
The President will have a security ring of American elite Secret Service, which are tasked to guard the President, along with National Security Guards (NSG) and personnel from central paramilitary forces and local police in Mumbai and Delhi. Similar arrangements will be in place in Delhi, with the Air Force One to be kept in all readiness throughout Obama's stay here from Sunday afternoon to Tuesday morning.
Maurya Hotel, where the President will stay, has already been swarmed by American security personnel and protective measures have been put in place. Security drills have already been carried out at the hotel as well as Rajghat, where he will visit. Sources said 13 heavy-lift aircraft with high-tech equipment, three helicopters and 500 US security personnel have arrived in India ahead of Obama's visit.
The US security has also brought interception and obstruction device, sniffer dogs, rescue gadgets. Apart from Obama's Air Force One, a few private luxury jets carrying top American corporate leaders, who are part of Obama's entourage, are also expected to arrive in India in the next 2-3 days.
All high-rise buildings in the vicinity of Mumbai's Taj Mahal hotel and Delhi's Maurya Sheraton hotel, where the US President will stay, are being sanitised and security personnel will be positioned on rooftops to prevent any air-borne attack. The Ridge area - opposite Delhi's Maurya Sheraton hotel - has been illuminated by floodlights as part of the heightened security drill. The Home Ministry has already issued an alert for Mumbai and Delhi asking authorities to take extra precautions during Obama's visit as well as on Diwali on Friday.
*This article is being posted from Toronto, Canada By DTN News ~ Defense-Technology News, contact: dtnnews@ymail.com
© Copyright (c) DTN News Defense-Technology News
Posted by Defense-Technology News at 11/05/2010 09:44:00 PM No comments:

Source: DTN News - - This article compiled by Roger Smith from reliable sources UPI
(NSI News Source Info) BRASILIA, Brazil - November 6, 2010: Brazilian President Luiz Inacio Lula da Silva has said that one of his priorities in the coming weeks will be to decide on a multibillion-dollar fighter jet tender with his successor, Dilma Rousseff. 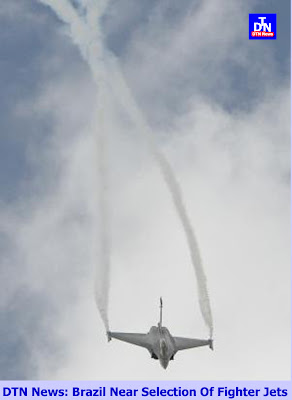 The deal is just the first of a rash of tenders Rousseff is expected to oversee in her term as Brazil plans to spend billions on imported weapons in the next years to increase its military might.

"We are going to talk over the issue of the fighters -- me, Rousseff and [Defense Minister Nelson] Jobim," Lula told reporters at a news conference with Rousseff in Brasilia.

Brazil has delayed picking the winner of an international fighter jet tender for months.

The foreign aerospace giants competing for the sale to Brazil of 36 combat aircraft are France's Dassault with its Rafale fighter, Sweden's Saab with the Gripen NG aircraft and U.S. company Boeing with the F/A-18 Super Hornet.

Experts have suggested that the initial tender for 36 planes could be increased to more than 120.

The deal is estimated to be worth $4 billion-$7 billion, depending on details of the order to be agreed, defense experts have said.

Lula had suggested that he would pick the French bid before leaving office but the decision was deferred to after the election. The pick has been on hold since March, Lula told reporters.

Rousseff, Lula's former Cabinet chief, easily won an Oct. 31 runoff and will take over as head of state Jan. 1.

Both are scheduled to attend a Group of 20 summit in South Korea next week with both French President Nicolas Sarkozy and U.S. President Barack Obama also expected to attend.

The fighter jets that are due to be ordered are intended to renew Brazil's aging fleet of combat aircraft. It has long been suggested that France's Rafale fighter stands as the preferred pick of the Latin American country.

What makes the French bid attractive, experts say, is France's sweetener of transferring technology related to the supersonic Rafale so that Brazil, bent on becoming the lead military power in South America, could assemble most of the jets itself and sell them regionally.

Brazil has already signed a deal with the French for the construction of five submarines in Brazil. The deal includes building a nuclear-powered vessel.

In recent weeks Brazil also signed defense cooperation agreements with Britain, adding to a pile of similar deals with other European countries and the United States.

The signing with Britain has paved the way for the potential purchase of 11 British warships to replace the country's aging navy fleet.

About 100,000 Guard and Reserve members serve in combat and experience the stress of war. They return to communities and jobs scattered across the nation and to friends and family who may not grasp the depth of their experience. The Defense Department's Yellow Ribbon Reintegration Program ensures these servicemembers and their families get the support and care they need.

One year after a tragic shooting spree at Fort Hood, Texas, left 13 people dead, the military is working at every level to apply lessons learned to protect the force against an increasingly complex threat.

The Secretary of Defense is the principal defense policy adviser to the President and is responsible for the formulation of general defense policy and policy related to all matters of direct concern to the Department of Defense, and for the execution of approved policy.

Careers with the DoD

Looking for a new job or thinking about joining the military? Click on the links below to find out how you can become a part of the Department of Defense.

The Pentagon Channel broadcasts military news and information for the 2.6 million members of the U.S. Armed Forces. Click the links below to watch the live and streaming videos or download the latest podcasts of your favorite shows.

For military service specific contract opportunities click the links below:

In January 2009, President Obama's first executive action was to sign the Memorandum on Transparency and Open Government, which sought to bridge the gap between the American people and their government.