Source: DTN News - - This article compiled by K. V. Seth from reliable sources Stratrisks.com
(NSI News Source Info) TORONTO, Canada - March 12, 2014: The Spanish government approved Friday an expansion of the size and duration of the U.S. military presence at the Moron base in southern Spain. 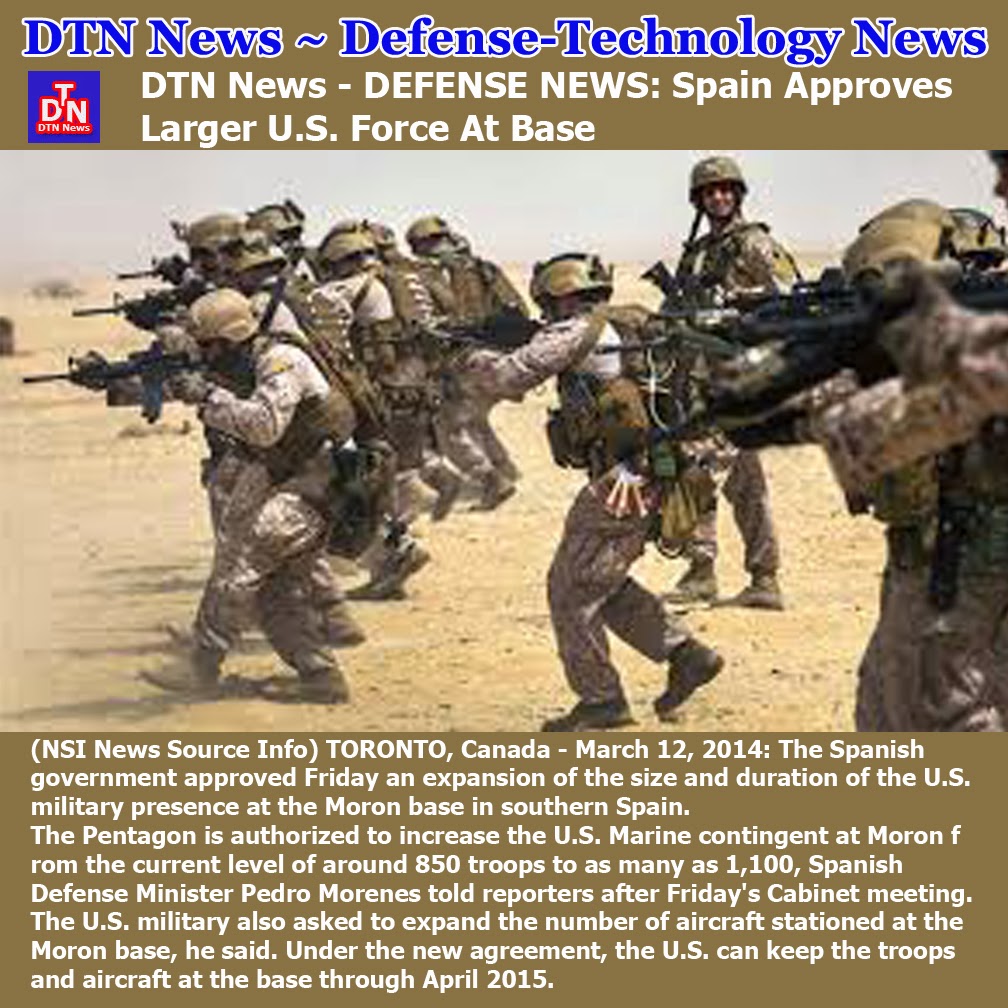 The Pentagon is authorized to increase the U.S. Marine contingent at Moron from the current level of around 850 troops to as many as 1,100, Spanish Defense Minister Pedro Morenes told reporters after Friday's Cabinet meeting.

The U.S. military also asked to expand the number of aircraft stationed at the Moron base, he said.

Under the new agreement, the U.S. can keep the troops and aircraft at the base through April 2015.

Morenes recalled that Spain has authorized the size of the U.S. presence at the Rota and Moron bases since 1988, and noted that the use of Moron is related to the instability of North Africa and the Sahel, which affects the interests of both the United States and Spain.

Following the decision of the Spanish government, the U.S. ambassador to Spain, James Costos, issued a communique thanking the people and government of Spain for their continued support for the Marines' rapid-response force at the Moron base.

He said that this group strengthens the efforts to stabilize a geographic region of interest both to the United States and to Spain, and facilitates joint operations by the military of both countries.

Costos said that Spain is "one of the most important allies of the United States and one of its most trustworthy partners." EFE

CONTRACTS
NAVY
General Dynamics National Steel and Shipbuilding Co., San Diego, Calif., is being awarded a $128,500,000 modification to previously awarded contract (N00024-09-C-2229) to accomplish the detail design and construction of the Mobile Landing Platform (MLP) 3 Afloat Forward Staging Base (AFSB).  This modification will provide the detail, design and construction efforts to convert the MLP 3 to an AFSB variant.  Work will be performed in San Diego, Calif., and is expected to be completed by October 2015.  Fiscal 2012, 2013 and 2014 national defense sealift funds in the amount of $95,093,500 will be obligated at time of award.  Contract funds will not expire at the end of the current fiscal year.  The Naval Sea Systems Command, Washington, D.C., is the contracting activity.
Interstate Electronics Corp., Anaheim, Calif., is being awarded an $8,911,790 modification under previously awarded cost-plus-fixed-fee, cost-plus-incentive-fee contract (N00030-14-C-0006) to exercise option line items for a new technology refresh of the C-Band Pulse Doppler Radar (RADAR-C) Transmitter and replacement of the Navy Mobile Instrumentation Ship Communication System in support of Trident II flight tests.  These option line items provide for, but are not limited to, engineering services (system engineering, design and development), system testing, verification and validation, logistics and full system documentation in order to achieve Flight Test Instrumentation Steady State for Strategic Systems Programs flight test mission support.  The maximum dollar value of the option line items is $8,911,790.  Work will be performed in Anaheim, Calif. (80 percent); Cape Canaveral, Fla. (18 percent); and San Jose, Calif. (2 percent), and work is expected to be completed March 15, 2016.  Fiscal 2014 other procurement, Navy contract funds in the amount of $8,911,790 will be obligated at the time of award and will not expire at the end of the current fiscal year.  This contract was a sole source acquisition pursuant to 10 U.S.C. 2304(c)(1).  The Department of the Navy, Strategic Systems Programs, Washington, D.C., is the contracting activity.
ARMY
Northrop Grumman Technical Service Inc., Herdon, Va., was awarded a $30,793,383 modification (P00010) to contract W9124B-13-C-0005 for continued logistic support services.  Fiscal 2014 operations and maintenance, Army funds in the amount of $30,793,383 were obligated at the time of the award.  Estimated completion date is Jan. 31, 2015.  Work will be performed at Fort Irwin, Calif.  Army Contracting Command, Fort Irwin, Calif., is the contracting activity.
DRS Technical Services Inc, Herndon, Va., was awarded a $30,271,266 hybrid firm-fixed price, cost-plus fixed-fee and cost reimbursable multi-year contract to operate control and maintain satellite communications between the continental United States and worldwide locations.  It will also provide help desk and field operations support.  Fiscal 2014 operations and maintenance, Army funds in the amount of $30,271,266 were obligated at the time of the award.  Estimated completion date is March 11, 2017.  Bids were solicited via the Internet with four received. Work will be performed in Rock Island, Ill., Afghanistan, Kuwait, and Germany.  Army Contracting Command, Rock Island, Ill., is the contracting activity (W52P1J-14-C-0026).
DEFENSE LOGISTICS AGENCY
API LLC**, Camuy, Puerto Rico, has been awarded a maximum $11,716,450 modification (P00102) exercising the first option period on a one-year base contract (SPM1C1-13-D-1037) with four one-year option periods for permethrin Army combat uniform coats.  This is a firm-fixed-price contract.  Location of performance is Puerto Rico with a March 18, 2015 performance completion date.  Using military service is Army.  Type of appropriation is fiscal 2014 through fiscal 2015 defense working capital funds.  The contracting activity is the Defense Logistics Agency Troop Support, Philadelphia, Pa.
MISSILE DEFENSE AGENCY
Northrop Grumman Space and Missions Systems, Colorado Springs, Colo. is being awarded A $750,000,000 in-scope contract modification (P00023) to previously awarded indefinite-delivery/indefinite-quantity contract to increase the estimated contract maximum from $2,500,000,000 to $3,250,000,000.  The contract remains a ten (10) year contract with an ordering period from Nov. 21, 2005 through Nov. 21, 2015.  The contract is a hybrid omnibus contract performing predominantly research, development, test and evaluation services for the development of the Ballistic Missile Defense System’s Command, Control, Battle Management, and Communications; the support infrastructure including all information technology; facilities; ground and flight test; warfighter wargames and exercises; modeling and simulation; several operational cells including the Ballistic Missile Defense Network Operations and Security Center, the Joint Functional Command Component for Integrated Missile Defense, and the 100th Missile Defense Brigade. Places of performance under the contract are worldwide but mainly support the Missile Defense Integration and Operations Center, Colorado Springs, Colo. Also supported are the Missile Defense Agency sites in Huntsville, Ala., the National Capital Region, and Dahlgren, Va.  No task order is being issued as a result of this award. No funds are being obligated as all funding takes place at the task order level. The Missile Defense Agency, Colorado Springs, Colo. is the contracting activity (#H95001-10-D-0001).
*Small Business
**Small Disadvantaged Business 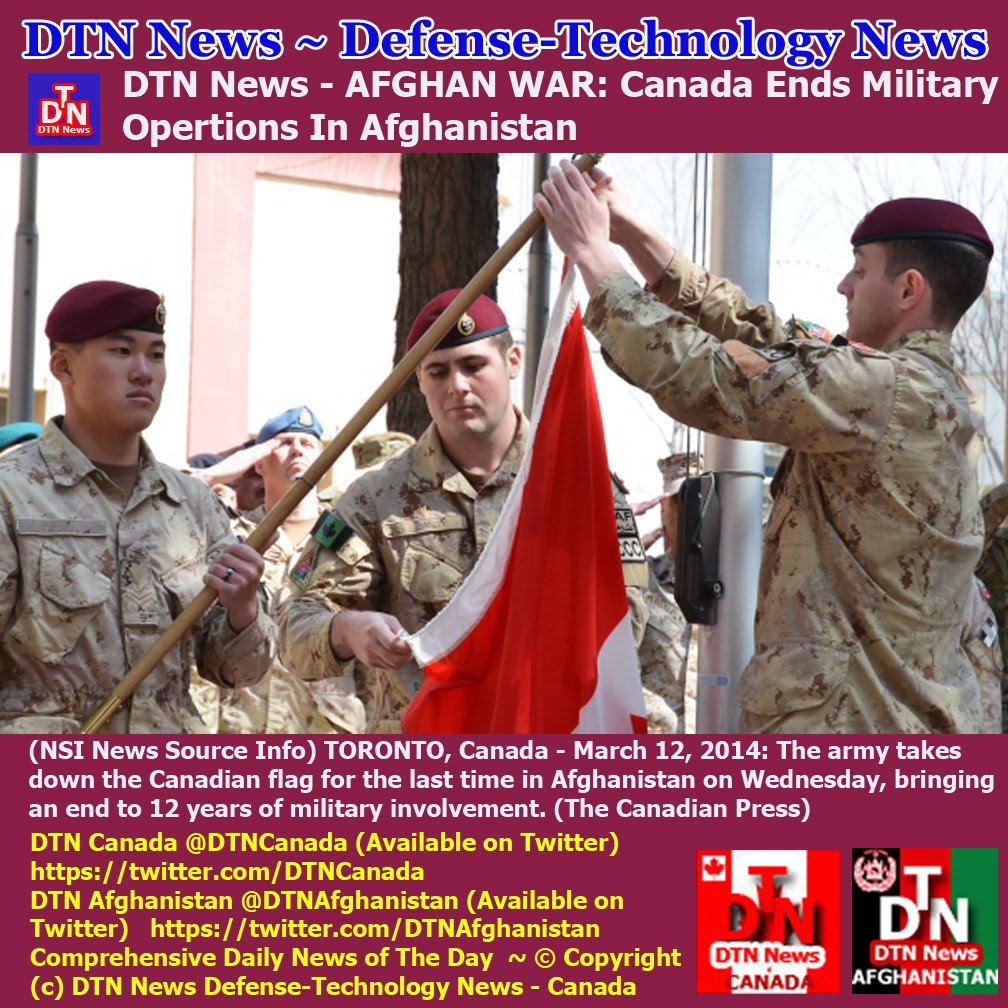 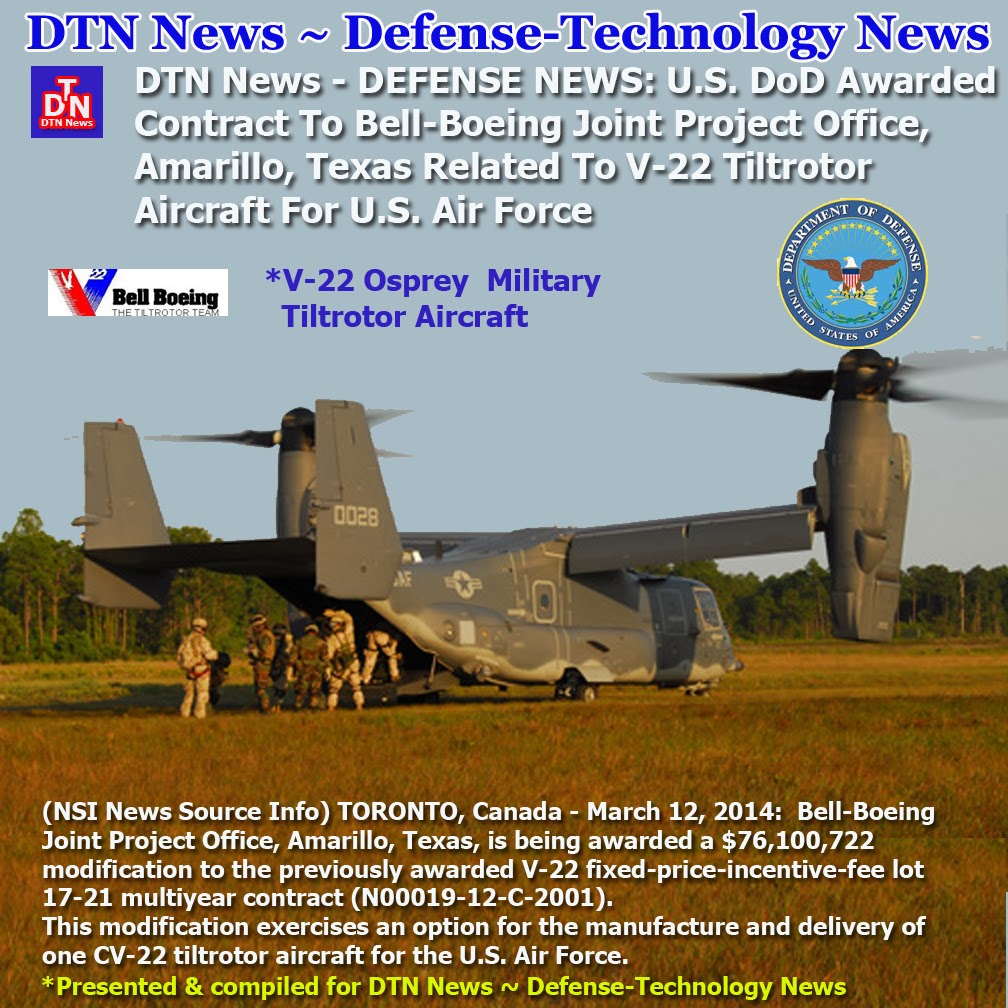 This modification exercises an option for the manufacture and delivery of one CV-22 tiltrotor aircraft for the U.S. Air Force.

Inside the Osprey
At twice the speed of a helicopter, the Osprey carries 24 combat troops, or up to 20,000 pounds (9,072 kg) of internal cargo or 15,000 pounds (6,804 kg) of external cargo. Its cargo bay can accommodate nine litters with medical personnel and equipment.

Ship Shaped
Designed with folding rotors and a rotating wing, the V-22 fits nicely in the maritime base. It stores compactly on board an aircraft carrier or assault ship in a minimal footprint. With air-to-air refueling capability, it meets the U.S. Navy requirements for combat search and rescue, fleet logistics support, and special warfare support.

Multi-Missioned
The V-22's multi-mission capability is like no other. From all manner of assault, support or transport to whatever the need requires in a speed-to-scene, coupled with a hovering capability, the Osprey delivers faster, better - and without peer.

Production Facts:
• The V-22 is produced under a strategic alliance between Bell Helicopter and The Boeing Company.

• Under the current program of record, the Marine Corps will purchase 360 MV-22s for missions including amphibious assault, ship-to-objective maneuvers and sustained operations ashore.

• The Navy is also slated to get 48 MV-22s, which could be used for fleet logistic support and search and rescue.


• The first operational Marine Osprey squadron, VMM-263, stood up at New River,NC, on March 3, 2006, with many of its pilots going through training at VMMT-204. The first operational AFSOC unit received the CV-22 was the 1st Special Operations Wing, Hurlburt Field, FL, on November 16, 2006.