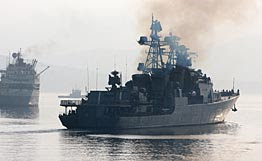 l Vinogradov destroyer arrived on Tuesday in Indonesia on an official visit following a three-month tour of duty in the Gulf of Aden. The destroyer, accompanied by the Boris Butoma tanker, is on its way to the home base in Vladivostok after participating in anti-piracy operations off the Somali coast. "During the mission, we escorted 12 convoys with a total of 54 ships from 17 countries and thwarted several pirate attacks on various vessels," said Capt. 1st Rank Sergei Ryazanov. "We also detained several pirates in the patrol area and handed them over to the Yemeni authorities," the officer said. The visit to Indonesia will last until Saturday, followed by a similar visit to the Chinese port of Zhanjiang on April 6-10. The Admiral Vinogradov is an Udaloy class missile destroyer, armed with anti-ship missiles, 30-mm and 100-mm guns, and Ka-27 Helix helicopters.
Posted by Defense-Technology News at 3/25/2009 06:39:00 AM

Udaloy class is the anti-submarine destroyer. And they also have the surface to air missile that means it is anti-aircraft missile.

Admiral Vinogradov destroyer is the Udaloy I.

Only the destroyer in the Udaloy II that armed with SS-N-22 Sunburn(Russian:P-270 Moskit or 3M80).
SS-N-22 Sunburn is the anti-ship missile.

Now, there is only one destroyer ship in Udaloy II, that is "Admiral Chabanenko (DDG650)".

Thanks "Monsoon" for your info.
Regards
Roger