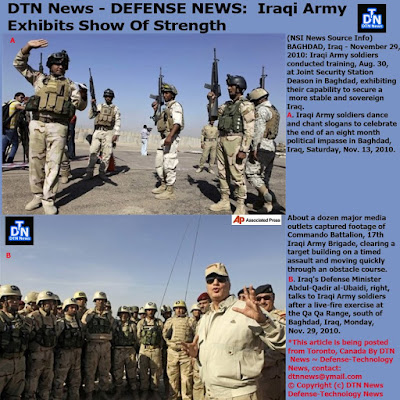 About a dozen major media outlets captured footage of Commando Battalion, 17th Iraqi Army Brigade, clearing a target building on a timed assault and moving quickly through an obstacle course. In the raid scenario, the IA 17th Bomb Disposal Company, Baghdad, identified an improvised explosive device and deployed a robot to remove it. IA soldiers also fired M-16 rifles and answered questions from the media about how they will work to secure Iraq during Operation New Dawn. Iraqi security forces are able to provide security and are progressing, said Iraqi Army Maj. Gen. Ali Jassim Mohammed Hassen al-Frejee, commanding general of 17th IA Division. Al-Frejee said he believes terrorists have no place in Iraq, and that one day they will be out of the country. “In this environment, the way that you measure success is in progress,” said Brig. Gen. Ralph O. Baker, deputy commanding general-east for United States Division – Center, during a press conference earlier that day at USD-C headquarters at Camp Liberty, Iraq. “I personally think that we’ll be able to look back and say things were successful here in hindsight and not based upon any particular event.” Some members of the media asked how Operation New Dawn would be different from Operation Iraqi Freedom. Maj. Gen. Terry Wolff, commanding general of 1st Armored Division and USD-C, said the main difference is an end in U.S. combat operations. He said Iraqi security forces have effectively taken ownership and displayed competence and confidence in day-to-day missions throughout Iraq. “They tell us that they can provide security on a daily basis,” Wolff said.