A last-minute bid by Nigeria's main opposition parties to form an alliance against President Goodluck Jonathan in this weekend's election has failed to reach a deal, a party official said Wednesday. 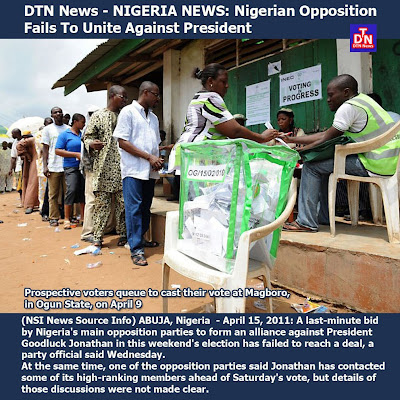 At the same time, one of the opposition parties said Jonathan has contacted some of its high-ranking members ahead of Saturday's vote, but details of those discussions were not made clear.

The country's two main opposition parties had renewed talks this week, with many suggesting their combined strength could force the ruling party into a runoff for the first time since Nigeria returned to civilian rule in 1999.

"We regret to announce that such talks have not led to any such alliance," said Bisi Akande, chairman of the Action Congress of Nigeria party, which is strong in Nigeria's southwest, where the economic capital Lagos is located.

"In the overall interest of the parties involved, our democracy as well as our country, it is better for each of the parties to go into the presidential election on its own platform."

Akande said the situation could change if Saturday's election results in a runoff.

His party had held talks with ex-military ruler Muhammadu Buhari's Congress for Progressive Change, which has made inroads in the north.

Buhari is seen as the main challenger to Jonathan. The ACN's presidential candidate is Nuhu Ribadu, the former head of Nigeria's anti-corruption agency.

The details that led to the collapse of the talks were not clear after earlier suggestions that Ribadu could quit the race in favour of Buhari.

The two parties had held a series of unsuccessful negotiations in the past in search of an alliance.

Opposition figures have attributed the earlier failures to personality conflicts and interference by the ruling Peoples Democratic Party, which was accused of seeking to scuttle the talks.

Apart from those discussions, Akande said the president has also contacted high-ranking ACN members in recent days, but he declined to discuss details.

"Jonathan may be a good man, but he belongs to a very bad party and we cannot solicit our supporters to vote for him," Akande told AFP.

A spokesman for the ruling PDP, Rufai Alkali, said contact had been made with opposition parties, but he declined to provide further details.

An effort by Africa's most-populous nation to break with a series of deeply flawed polls and hold a credible vote is seen as providing the opposition with a greater opening than in previous years.

But without an alliance for the presidential election, the opposition may face a difficult road. All three of the main opposition candidates are from the country's north, which could result in their votes being split.

Vanguard - ‎1 hour ago‎
Abuja – Leader of the 300-member ECOWAS observation mission to Nigeria's April elections, Prof. Amos Sawyer, said in Abuja,yesterday, that he had no fears about Saturday's presidential election. Sawyer told a news conference that reports from the ...

Ghana Broadcasting Corporation - John Agyekum - ‎2 hours ago‎
Kufuor on Thursday, urged Nigerians to show exemplary conduct at their Presidential polls next Saturday for the emulation of other countries. “Nigeria must get it right to pave the way for others to follow. position in Africa. ...

The Guardian - ‎6 hours ago‎
Goodluck Jonathan's campaign on the move in Lagos. Nigeria goes to the polls to elect its president this weekend. Photograph: Sunday Alamba/AP The crowd gathers around the polling station officials, gesticulating angrily. Several pages of the voters' ...

Elections are Nigeria's Chance to Shine

Voice of America - ‎8 hours ago‎
Nigerians head to the polls this month in a series of elections to pick members of parliament, state governors and president. A truck with an election campaign banner depicting Nigeria's incumbent President Goodluck Jonathan, in Lagos, Nigeria, ...

Vote for candidates of your choice, says Jonathan

Goodluck and the Nigerian Capital Market

Vanguard - ‎11 hours ago‎
BY RAHEEM ABBAS NEITHER in the NN24 debate attended by the three closest challengers to President Goodluck Jonathan in Saturday's presidential elections, nor in the other debate attended solely by President Jonathan, was a serious issue with perhaps ...

NEXT - ‎11 hours ago‎
Tomorrow, Nigeria will find out whether the incumbent president, Goodluck Jonathan, will be a given another chance to prove his mettle as the nation's leader, or whether that huge responsibility will be handed over to former military ruler, ...

Mark to EU: Don't interfere in our elections

Vanguard - ‎11 hours ago‎
BY INALEGWU SHAIBU Senate President, David Mark, has warned the European Union, EU, and other international observers monitoring the 2011 general polls in the country not to interfere in the electoral process. Sen Mark, who gave the warning while ...

Vanguard - ‎12 hours ago‎
BY OBINNA OKWUAKA IN a recent discussion, a concerned Nigerian harped on the results of the concluded National Assembly (NASS) elections, expressing confidence in the Independent Electoral Commission (INEC) and stating that Nigeria can restore her ...

Vanguard - Emmanuel Aziken, Dapo Akinrefon - ‎12 hours ago‎
By EMMANUEL AZIKEN & DAPO AKINREFON LAGOS – PRESIDENT Goodluck Jonathan and his two major contenders in tomorrow's presidential election were, yesterday, trying to outsmart one another in the race for the Presidency. While President Jonathan ...

The Nation Newspaper - ‎13 hours ago‎
THE Labour Party(LP) in Ondo State yesterday ratified its national leadership's adoption of President Goodluck Jonathan as the party's candidate in tomorrow's presidential election. By popular affirmation of it's leadership from the 18 local ...

Vanguard - Donu Kogbara - ‎13 hours ago‎
I AM not a fan of the PDP. I think it is a lousy party. But I will root for it tomorrow because it happens to have Dr. Goodluck Jonathan at its helm. Sure, Jonathan possesses weaknesses, but don't we all? ...

Vanguard - Tony Nwankwo - ‎13 hours ago‎
Igbo who troop into polling stations next tomorrow must not only vote for President Goodluck Jonathan, but also ensure they vote carefully so that their votes would not be voided. Speaking at a press conference in Lagos, ...

What NASS election says about Jonathan

Nigerian Tribune - Leon Usigbe - ‎13 hours ago‎
FOR over a year, President Goodluck onathan has harped on his determination to produce the best elections Nigerians have seen yet. From one forum to another, he did not fail to drum it home that this time, Nigeria must align with true democratic ...

Nigerian Tribune - ‎13 hours ago‎
Minister of Labour and Productivity, Chief Emeka Wogu, has told Nigerian workers that President Goodluck Jonathan deserves their support and votes as Nigerians go to the poll tomorrow to elect their president in the presidential election. ...

Nigerian Tribune - Banji Aluko - ‎13 hours ago‎
PRESIDENT Goodluck Jonathan has been described as the fulfil-ment of the prophecy of the sage, Chief Obafemi Awolowo. Awolowo had predicted that someone from the Nigerian minority tribes would, one day, become the president of Nigeria. ...

The Nation Newspaper - ‎13 hours ago‎
About six million Nigerian youths are expected to be at the polling units across the country to monitor President Goodluck Jonathan's votes during Saturday's presidential election, Goodluck/Sambo campaign group has said. ...

Jonathan on the eve

Nigerian Tribune - Nosa Osaigbovo - ‎14 hours ago‎
President Goodluck Jonathan appears well placed to win the April 16 presidential election. The election may be a coronation and not a contest. President Jonathan has been on a political roll, propelled by happy circumstance that may not be fairly ...

As we head for the presidential polls

The Nation Newspaper - Anthony Ubani - ‎14 hours ago‎
Tomorrow, eligible Nigerian voters will go to the polls nationwide to elect a president that will serve them from 2011 to 2015. This will be the culmination of a long process that kick-started with the voter registration exercise by the electoral ...

AFP - Susan Njanji - ‎17 hours ago‎
ABUJA — Nigeria must hold a credible presidential election this weekend since failing to do so could set a disastrous example for the rest of the continent, Ghana ex-president John Kufuor said Thursday. Kufuor, widely respected for having bowed out ...

Reuters Africa - ‎18 hours ago‎
By Nick Tattersall LAGOS, April 14 (Reuters) - Nigerian President Goodluck Jonathan goes into an election on Saturday bolstered by division among the main opposition parties which has increased his chances of sealing victory in the first round. ...

Election: All fears are gone – Mark

Vanguard - ‎20 hours ago‎
By KINGSLEY OMONOBI Senate President, David Mark, Thursday, that the perseverance, commitment and patriotism displayed by Nigerians towards the success of the 2011 elections have erased the fears hitherto expressed by skeptics about the polls. ...

Nigeria Gets Set for Presidential Vote

Voice of America - ‎21 hours ago‎
Nigerians vote for president Saturday as Africa's most populous nation seeks to end its history of flawed elections. President Goodluck Jonathan of the ruling People's Democratic Party (PDP) is favored to win. However his top rivals are reported to be ...

Change They Can Almost Believe In

NEXT - Festus Owete - ‎Apr 14, 2011‎
Ahead of Saturday's presidential election, six presidential candidates on Wednesday withdrew from the race and threw their weight behind President Goodluck Jonathan, who is the candidate of the People's Democratic Party (PDP). ...