Sony said it was working with investigators after hackers stole data from users of its PlayStation Network, and told customers it would restore services only when it was confident it was secure. 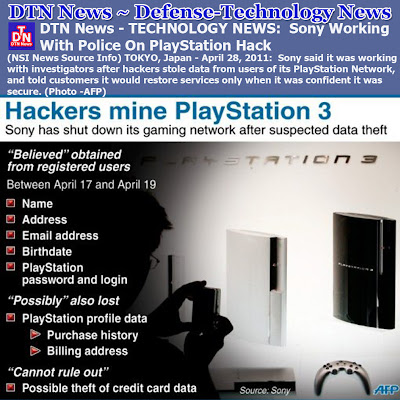 The PlayStation Network and Qriocity streaming music service were turned off on April 20 in the wake of an "external intrusion," according to Sony spokesman Patrick Seybold.

"We are currently working with law enforcement on this matter as well as a recognised technology security firm to conduct a complete investigation," Seybold said in a blog posted Thursday on the PlayStation website.

"This malicious attack against our system and against our customers is a criminal act and we are proceeding aggressively to find those responsible."

Launched in November 2006, the PlayStation Network allows PlayStation console users to play games online, challenge others on the Internet, stream movies, or get other services.

"While all credit card information stored in our systems is encrypted and there is no evidence at this time that credit card data was taken, we cannot rule out the possibility," Seybold said, warning that "...we are advising you that your credit card number and expiration date may have been obtained."

Sony said it had emailed all 77 million users worldwide to warn them that their data may have been stolen.

"Hope these people are caught. I think gamers worldwide would love a new Sony PSN series about bringing them to justice," wrote one gamer using the name BlueFrog007.

"I hope Sony finds the hackers and puts them in jail!!! I mean they just stole a boatload of personal info they deserve 25 to life," said user Lopez9577.

"We are aware of the problem and are working to resolve the issue." The problem appeared to be linked to just the one game.

Sony said it was "working day and night to restore operations as quickly as possible" and expected to have some services up and running within a week.

"However, we want to be very clear that we will only restore operations when we are confident that the network is secure," Seybold said.

Gamers posting on the network site were generally supportive of Sony's efforts but some were frustrated after a week with no access and others were scathing of the company's handling of personal data.

"Just because it's behind 'security' doesn?t mean it shouldn't be encrypted. Sony, you failed your user on a worldwide scale in regard to protecting their personal information," wrote gamer BloodyCow, who described themselves as a computer network engineer.

Several users said they had cancelled their credit or debit cards as a precaution.

"I rather just change cards than to take the chance. Lets face it, even encrypted info can be un-encrypted," said mixedkidbx.

Sony has not indicated whether it has identified a culprit in the intrusion.

Anonymous argued that PS3 owners have the right to do what they wish with them, including modifying them.

Seybold said Sony was taking steps to enhance security, including moving its network infrastructure and data centre to "a new, more secure location."

Sony has sold about 48 million PS3 consoles worldwide since they hit the market in November of 2006.

MarketWatch - Jennifer Waters - ‎10 minutes ago‎
If you're a user of Sony's PlayStation Network fearing your account info has been compromised, here's what to do.

AFP - Mike Patterson - ‎1 hour ago‎
TOKYO — Sony said it was working with investigators after hackers stole data from users of its PlayStation Network, and told customers it would restore services only when it was confident it was secure. The PlayStation Network and Qriocity streaming ...

Economic Times - ‎1 hour ago‎
WILMINGTON, Delaware/NEW YORK: Sony Corp could face legal action across the globe after it belatedly disclosed one of the biggest online data breaches ever. In the United States, several members of Congress seized on the breach, in which hackers stole ...

Sony PlayStation hack: a glimpse into the world of online crime

Wall Street Journal (blog) - Ben Rooney - ‎2 hours ago‎
All credit card information stored on Sony's PlayStation Network was encrypted, the company has confirmed, following the news that hackers penetrated the company's defenses and may have obtained records on more than 70 million subscribers ...

Forbes (blog) - Andy Greenberg - ‎2 hours ago‎
The good news first: In the massive breach of its Playstation Network that exposed as many as 77 million users' data, those users' credit cards remained encrypted, and so likely weren't readable for whoever broke into the network. ...

CNN International (blog) - ‎2 hours ago‎
(CNN) – The hackers who hit Sony's online PlayStation videogame service not only forced the company to take down its 70 million-plus user network, known as PSN, but struck a blow against the company's strategic long-term plans. ...

Register - Richard Chirgwin - ‎2 hours ago‎
A gamer is suing Sony over the data breach in which the personal details of more than 70 million PlayStation Network and Qriocity users were stolen. Although Sony has maintained that there is no evidence ...

The Australian - Chris Griffith - ‎3 hours ago‎
SONY has admitted that it failed to encrypt the personal information of 77 million PlayStation Network users stolen by hackers a week ago. The hacking has affected around 715000 Australian consumers, in what has been described as the largest known ...

Independent Online - Sean Poulter - ‎3 hours ago‎
London - Millions of Britons may be issued with new credit cards over fears their banking details have been stolen by thieves hacking into the Sony PlayStation Network. The personal information of 77 million people around the world is ...

Boston Globe - Hiawatha Bray - ‎3 hours ago‎
I'm tempted to lead off this column with my PlayStation Network password. After all, it's hardly a secret anymore. It's been stolen, along with 77 million others from around the world. Data thieves also grabbed our names, ...

PlayStation breach was kept under wraps

Aljazeera.net - ‎3 hours ago‎
Sony has admitted that hackers have stolen the private data of upto 80 million users of its PlayStation console. Sony admits that over 75 million customers personal information may have been compromised, including names, addresses, passwords, ...

PlayStation breach was kept under wraps

Al Jazeera - ‎4 hours ago‎
Electronics giant Sony has admitted that hackers have stolen the private data of up to 80 million users of its PlayStation console.

The Chosun Ilbo - ‎4 hours ago‎
Korean Internet users are on alert after Sony was hit by the biggest hacker attack in its history. Sony's US affiliate on Wednesday said an internal investigation shows the hacker attack resulted in the leak of the personal information of 77 million ...

The Sun - Anthony France - ‎6 hours ago‎
THREE million British gamers caught up in the PlayStation online hacking scandal were yesterday urged to cancel their credit cards. And Sony faced a furious backlash from 77 million customers globally now at risk from fraudsters who ...

Salt Lake Tribune - Vince Horiuchi - ‎6 hours ago‎
The PlayStation Network outage affecting millions of video game players worldwide — a security breach that exposed personal information and perhaps credit card numbers to hackers — also is hampering the development of one of the most ...

Brier Dudley 'Some services' of PSN back within a week, Sony says

The Seattle Times - ‎6 hours ago‎
Sony Sony provided an update on the PlayStation Network outage that began last week, saying "some services" should be restored within a week. In the meantime, users should be extra careful about online scammers trying to obtain more personal ...

Sony: PlayStation Network will be 'safer and more secure' after breach

USA Today - Brett Molina - ‎7 hours ago‎
In a new Q&A posted on the official PlayStation blog, Sony says they are working to resurrect the breached PlayStation Network and make it "safer and more secure." Sony is still unsure whether credit card data was taken, ...

Wall Street Journal (blog) - ‎7 hours ago‎
By WSJ Staff If you are a user of Sony's PlayStation Network, the fact that your credit card information could be in the wrong hands may be the least of your worries. Canceling a card is not very hard. Protecting against the consequences of the loss of ...

Sony PlayStation breach: What the security experts are saying

Los Angeles Times - ‎7 hours ago‎
If your account was one of the 77 million on Sony's PlayStation Network or Qriocity online music service, there's no reason to panic. Security experts say that while the scope of the breach was among the largest in history, the resulting financial ...

msnbc.com - Winda Benedetti - ‎7 hours ago‎
Stay up to speed with news and reviews on video games for the PC, PlayStation 3, Nintendo Wii, Xbox 360, iPhone, iPad, Droid, Facebook and more. By Winda Benedetti Gamers and government officials are irate over Sony's admission that a massive security ...

Legal Troubles Heat Up For Sony After PSN Breach

PCWorld - David Daw - ‎8 hours ago‎
Sony faces mounting legal and political headaches after hackers steal the personal information of at least 70 million users. By David Daw, PCWorld Sony's announcement on Tuesday of the sheer scale of the security breach that forced it to shut down the ...