Source: DTN News - - This article compiled by Roger Smith from reliable sources Eurocopter/EADS
(NSI News Source Info) TORONTO, Canada - March 29, 2013: Eurocopter makes a breakthrough into the Bangladeshi civil helicopter market with the arrival of the country’s first Eurocopter rotorcraft this year. An EC130 B4 was delivered to R&R Aviation; while an AS350 B3e was showcased to civilian and governmental prospects in a two-day flight demonstration. Both aircraft are light helicopters belonging to Eurocopter’s world renowned Ecureuil family. 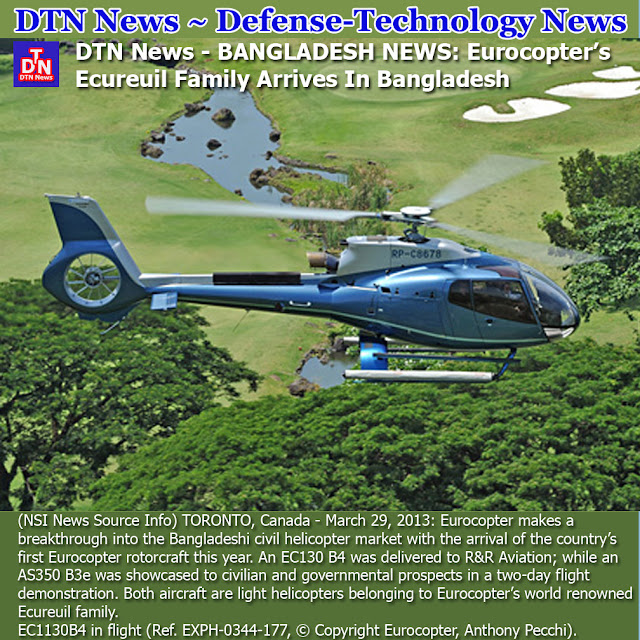 Eurocopter delivered its first civil helicopter to R&R Aviation Limited (a concern of Sikder Group) earlier this month – the first of two EC130 B4s that were acquired by the Bangladeshi helicopter operator during the Singapore Airshow last year. To be used primarily for providing emergency medical services (EMS) and humanitarian support, the EC130 B4 can also be reconfigured for air charters, sightseeing tours and aerial observation with a cabin that seats up to eight passengers.
R&R Aviation is the largest private helicopter operator in Bangladesh. Rick Haque Sikder, R&R Aviation Chairman explained, “We are very proud to be the first Eurocopter operator in Bangladesh. This high performance aircraft will enable us to develop our commercial and medical services for the people of Bangladesh. We are looking forward to receiving our second EC130 B4 and we hope that this is the beginning of a long term partnership between R&R Aviation and Eurocopter, with more helicopters to come.”
Recognizing the potential of light helicopters in this market, Eurocopter also brought in an AS350 B3e for a two-day flight demonstration in Dhaka. The demonstration showcased the AS350 B3e’s capabilities to the helicopter pilots community, business leaders, senior officers from governmental entities and civil aviation authorities. “We see a promising future for the demand and deployment of helicopters in both the civil and governmental markets in Bangladesh,” said Eurocopter South East Asia President, Eric Toussaint. “With its advanced technology and versatility, the AS350 B3e is able to answer most of the country’s requirements for a variety of missions, including passenger transport, EMS, aerial work, law enforcement, disaster management, etc.”
The aircraft was well-received by the participants with very positive feedback on the speed and level of comfort. Commenting on his flight experience, Brigadier General Abdullah Al Azhar, commander of the ad hoc army aviation group, who is also a qualified pilot of Eurocopter’s medium, twin-engined AS365 N3+ Dauphin, noted that “the rate of climb and manoeuvrability of the AS350 B3e was impressive, surpassing our expectations of a single-engine aircraft.”
The AS350 B3e used for the flight demonstration was on its way to Kathmandu, Nepal, to be delivered to Shree Airlines, the biggest helicopter operator in Nepal. Providing services for United Nations humanitarian missions for rations distribution and passenger transport around the world, Shree Airlines is increasing its fleet to expand their activities for EMS and tourism in Nepal.
Both the EC130 B4 and AS350 B3e are members of Eurocopter's rugged and proven Ecureuil family. The EC130 B4 offers one of the most spacious cabins in its class, and is also the quietest helicopter in the market: its Fenestron® shrouded tail rotor and automatic variable rotor speed control result in a significantly reduced external sound level. The AS350 B3e is the latest member of the AS350 high-performance family, which is not only versatile and safe, but also offers competitive acquisition and maintenance costs. It excels in hot conditions and very high altitudes, and broke records when a standard production aircraft landed on the top of Mount Everest in 2005.
Today, around 5,350 Ecureuils have been delivered in 130 countries to some 1,600 operators. These aircraft have accumulated close to 25 million flight hours.
About Eurocopter South East Asia
Eurocopter South East Asia (ESEA) is the Regional Headquarters of Eurocopter, the world’s leading helicopter manufacturer. Established in 1977 in Singapore, ESEA is the training and technical hub, and handles sales and customer support activities of 15 territories in total. In 2012, ESEA achieved a turnover of 138 million Euros. With a staff-strength of more than 200 professionals, the company has developed a successful commercial network of Singapore-based sales team and regional sales managers and technical representatives, servicing and maintaining more than 300 helicopters in the region.
www.eurocoptersea.com.sg
About Eurocopter
Established in 1992, the Franco-German-Spanish Eurocopter Group is a division of EADS, a world leader in aerospace and defense-related services. The Eurocopter Group employs approximately 22,000 people. In 2012, Eurocopter confirmed its position as the world’s No. 1 helicopter manufacturer with a turnover of 6.3 billion Euros, orders for 469 new helicopters and a 44 percent market share in the civil and parapublic sectors. Overall, the Group’s helicopters account for 33 percent of the worldwide civil and parapublic fleet. Eurocopter’s strong international presence is ensured by its subsidiaries and participations in 21 countries. Eurocopter’s worldwide network of service centers, training facilities, distributors and certified agents supports more than 2,900 customers. There are currently more than 11,780 Eurocopter helicopters in service in 148 countries. Eurocopter offers the most comprehensive civil and military helicopter range in the world and is fully committed to safety as the most important aspect of its business.