Source: DTN News - - This article compiled by Roger Smith from reliable sources By Phoebe Greenwood, Tel Aviv  - guardian.co.uk
(NSI News Source Info) TORONTO, Canada - March 14, 2013:  It will be one of the hottest tickets in town. When the US president,Barack Obama, arrives in Israel on an official visit next week, one of the highlights for the country's dignatries will be a dinner hosted at Israeli president Shimon Peres's home. And among those set to dine with the two presidents is the first black Miss Israel, Yityish Aynaw. 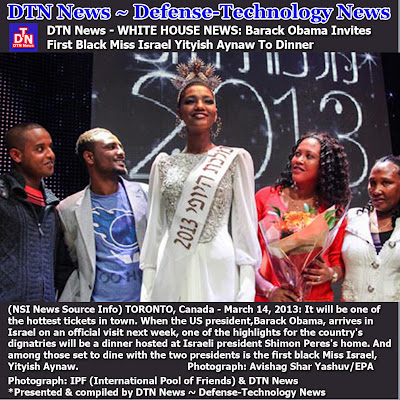 When the president's staff called to invite her to the dinnerAynaw, who was crowned just a few weeks ago, was understandably taken aback. "I didn't believe this was happening," she told the Jerusalem Post.
Aynaw arrived in Israel from Ethiopia when she was 12 years old. The beauty queen, who has worked as a sales assistant since leaving the army, has admitted that it was initially difficult for her to assimilate into Israeli society. Despite being 100,000 strong, the Ethiopian Jewish community is marginalised in Israel, where some rabbis have questioned the authenticity of their Jewish faith.
In the course of the Miss Israel competition, Aynaw told the panel of judges: "It's important that a member of the Ethiopian community win the competition for the first time. There are many different communities of many different colours in Israel, and it's important to show that to the world."
On learning that she would be dining with the US president alongside the Israeli leadership, Aynaw admitted that as a young immigrant, she would not have believed "such a thing could happen" to her. Once the news sunk in, however, the 21 year-old former Israeli army officer declared herself "excited" and reasoned: "The first black Miss Israel to be chosen and [Obama] is the first black American President. These goes together."
Obama, she said, has had a "notable influence in her life".
Shortly after winning the title, Aynaw named assassinated US civil rights leader Martin Luther King as one of her heroes: "He fought for justice and equality, and that's one of the reasons I'm here: I want to show that my community has many beautiful qualities that aren't always represented in the media."
While she may have embraced her life in Israel, Aynaw has refused to adopt a Hebrew name as many of African immigrants have done. "I was born sick but my mum believed I had a future," she told Jewish publication The Tablet, explaining that her name in Amharic, the second most spoken Semitic language in the world after Arabic, means "looking towards the future". "I'd never change my name," she said. "Ever".
With African roots and controversial names in common, Miss Israel and President Obama have ample mutual ground to break the ice.