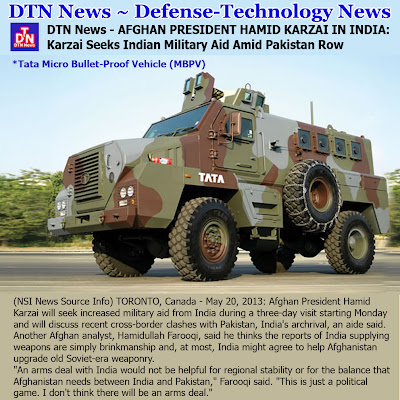 The comments follow a weekend report by the Times of India that said Afghanistan's ambassador to India had said the country needs India's help with "equipment and weapons to fight." The Press Trust of India later quoted a spokesman for New Delhi's Foreign Ministry as saying the country is ready to meet any such request.

"Yes, we will ask for assistance for the strengthening of our security forces," Karzai spokesman Aimal Faizi said in a briefing ahead of the trip. He did not comment on the Indian reports.
Karzai's visit could irk Pakistan, especially if any arms deal materializes. Pakistan considers Afghanistan its own backyard and suspects rival India of seeking greater influence there as a strategy to hem in the country from both sides. Pakistan and India have fought three wars since they were divided into two countries when they gained independence from Britain in 1947.
Afghanistan and India signed a strategic partnership agreement in 2011 that has included Indian military training of Afghan security forces. Faizi indicated in Saturday's briefing that Karzai would seek to expand that cooperation. "Whatever our Afghan security forces would need for assistance and help, India would help us," he said.
Afghan analyst Wadir Safi, a political science professor at Kabul University, says the timing of Karzai's India trip is likely related to recent border skirmishes with Pakistan.
Each side has been accusing the other of firing across the mountainous border region for months, including a skirmish earlier this month that killed an Afghan border policeman. Both countries have also accused each other of providing shelter for insurgents fighting on the other side of the border.
Afghan accusations that Pakistan is allegedly trying to torpedo efforts to start peace talks with the Taliban have also contributed to deteriorating relations. Pakistan is considered crucial to nudging Taliban leaders, many of which are in hiding in Pakistan, to the table — a key goal of the United States and its allies ahead of the final pullout of foreign combat forces by the end of next year.
Karzai has long been deeply suspicious of the motives of Pakistan's government and military, which backed the Taliban regime before it was toppled in the 2001 U.S.-led intervention and has since seemed unable or unwilling to go after militant leaders taking refuge inside its borders. The killing of al-Qaida chief Osama bin Laden in Pakistan only strengthened Afghan wariness of his neighbor.
Any increased military cooperation with India would likely only contribute to tensions, Safi warned. Afghanistan had been a proxy battleground for Pakistan and India during the war between the Pakistani-backed Taliban regime and the India-supported Northern Alliance.
Another Afghan analyst, Hamidullah Farooqi, said he thinks the reports of India supplying weapons are simply brinkmanship and, at most, India might agree to help Afghanistan upgrade old Soviet-era weaponry.
"An arms deal with India would not be helpful for regional stability or for the balance that Afghanistan needs between India and Pakistan," Farooqi said. "This is just a political game. I don't think there will be an arms deal."
Aside from regional strategic rivalries, Karzai is expected to discuss economic issues and will visit an engineering university where he will receive an honorary degree, Faizi said.
India has invested more than $2 billion in Afghan infrastructure, including highways and hospitals and rural electricity projects. New Delhi is hoping to gain some influence in the country after 2014, when Afghan forces become responsible for the entire country's security.
Karzai, who earned his college degree in India, has visited New Delhi more than a half dozen times in the past few years, most recently in November 2012.