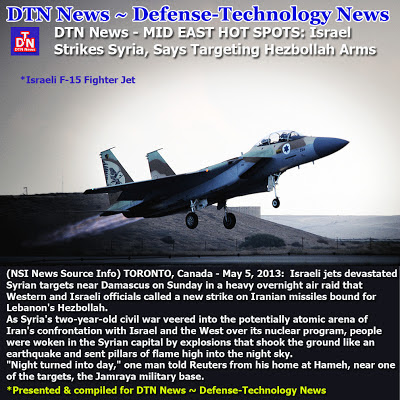 As Syria's two-year-old civil war veered into the potentially atomic arena of Iran's confrontation with Israel and the West over its nuclear program, people were woken in the Syrian capital by explosions that shook the ground like an earthquake and sent pillars of flame high into the night sky.

"Night turned into day," one man told Reuters from his home at Hameh, near one of the targets, the Jamraya military base.

But for all the angry rhetoric in response from Tehran and from the government of Syrian President Bashar al-Assad, it was unclear whether the second such raid in 48 hours would elicit any greater reaction than an Israeli attack in the same area in January, which was followed by little evident change.

The Syrian government accused Israel of effectively helping al Qaeda Islamist "terrorists" and said the strikes "open the door to all possibilities"; but Israeli officials said that, as in January, they were calculating Assad would not pick a fight with a well-armed neighbor while facing defeat at home.

Denying it was weighing in on the rebel side on behalf of Washington - which opposes Assad but is hesitating to intervene - officials said Israel was pursuing its own conflict, not with Syria but with Iran, and was acting to prevent Iran's Hezbollah allies receiving missiles that might strike Tel Aviv if Israel made good on threats to attack Tehran's nuclear program.

What Israel was not doing, they stressed, was getting drawn into a debate that has raged in the United States lately of whether the alleged use of poison gas by Assad's forces should prompt the West finally to give military backing to oust him.

Israel was not taking sides in a civil war that has pitted Assad's government, a dour but mostly toothless adversary for nearly 40 years, against Sunni rebels, some of them Islamist radicals, who might one day turn Syria's armory against the Jewish state.

It is a mark of how two years of killing in which at least 70,000 Syrians have died has not only inflamed a wider, regional confrontation between Shi'ite Muslim Iran and Sunni Arabs, some of them close Western allies, but have also left Israel and Western powers scrambling to reassess where their interests lie.

Egypt, the most populous Arab state and flagship of the 2011 Arab Spring revolts where elected Islamists have replaced a Western-backed autocrat, has no love for Assad. But on Sunday it condemned Israel's air strikes as a breach of international law that "made the situation more complicated".

Israel does not confirm such missions explicitly - a policy it says is intended to avoid provoking reprisals. But an Israeli official told Reuters on condition of anonymity that the strikes were carried out by its forces, as was a raid early on Friday that U.S. President Barack Obama said had been justified.

A Western intelligence source told Reuters: "In last night's attack, as in the previous one, what was attacked were stores of Fateh-110 missiles that were in transit from Iran to Hezbollah."

Prime Minister Benjamin Netanyahu said his aim for Israel was to "guarantee its future" - language he has used to warn of a willingness to attack Iran's nuclear sites, even in defiance of U.S. advice, as well as to deny Hezbollah heavier weapons.

He later flew to China on a scheduled trip, projecting confidence there would be no major escalation - though Israel has reinforced its anti-missile batteries in the north.

Syrian state television said bombing at a military research facility at Jamraya and two other sites caused "many civilian casualties and widespread damage", but it gave no details. The Jamraya compound was also a target for Israel on January 30.

Hezbollah's Al-Manar television showed a flattened building spread over the size of a football pitch, with smoke rising from rubble containing shell fragments. It did not identify it.

Syrian state television quoted a letter from the foreign minister to the United Nations saying: "The blatant Israeli aggression has the aim to provide direct military support to the terrorist groups after they failed to control territory."

Obama defended Israel's right to block "terrorist organizations like Hezbollah" from acquiring weapons after Friday's raid, and a White House spokesman said on Sunday: "The president many times has talked about his view that Israel, as a sovereign government, has the right to take the actions they feel are necessary to protect their people."

It was unclear that Israel had sought U.S. approval for the strikes, although the White House spokesman said: "The close coordination between the Obama administration, the United States of America, is ongoing with the Israeli government."

Obama has in recent years worked to hold back Netanyahu from making good on threats to hit facilities where he says Iran, despite its denials, is working to develop a nuclear weapon.

On Sunday, some Israeli officials highlighted Obama's reluctance to be drawn into new conflict in the Middle East to explain Israel's need for independent action.

Tehran, which has long backed Assad, whose Alawite minority has religious ties to Shi'ite Islam, denied the attack was on armaments for Lebanon and called for nations to stand firm against Israel. A senior Iranian commander was quoted, however, as saying Syria's armed forces were able to defend themselves without their allies, though Iran could help them with training.

Hezbollah, a Shi'ite movement that says it is defending Lebanon from Israeli aggression, declined immediate comment.

Analysts say the Fateh-110 could put the Tel Aviv metropolis in range of Hezbollah gunners, 100 km (60 miles) to the north, bolstering the arsenal of a group that fired some 4,000 shorter-range rockets into Israel during a month-long war in 2006.

"What we want is to ensure that inside the Syrian chaos we will not see Hezbollah growing stronger," Israeli lawmaker Tzachi Hanegbi, a confidant of Netanyahu, told Army Radio.

"The world is helplessly looking on at events in Syria, the Americans in particular, and this president in particular," he added of Obama. "He has left Iraq, Afghanistan and has no interest in sending ground troops to Syria ... That is why, as in the past, we are left with our own interests, protecting them with determination and without getting too involved."

Video footage uploaded onto the Internet by Syrian activists showed a series of blasts. One lit up the skyline of Damascus, while another sent up a tower of flames and secondary blasts.

Syrian state news agency SANA said Israeli aircraft struck in three places: northeast of Jamraya; the town of Maysaloun on the Lebanese border; and the nearby Dimas air base.

"The sky was red all night," one man said from Hameh, near Jamraya. "We didn't sleep a single second. The explosions started after midnight and continued through the night."

Central Damascus was quiet on the first day of the working week, and government checkpoints seemed reinforced. Some opposition activists said they were glad strikes might weaken Assad, even if few Syrians have any liking for Israel: "We don't care who did it," Rania al-Midania said in the capital. "We care that those weapons are no longer there to kill us."

By AARON KALMAN and STUART WINER

By AP and TIMES OF ISRAEL STAFF