Source: DTN News - - This article compiled by Roger Smith from reliable sources Stratfor
(NSI News Source Info) TORONTO, Canada - May 14, 2013: An amendment to a standing water treaty between the United States and Mexico has received publicity over the past six months as an example of progress in water sharing agreements. But the amendment, called Minute 319, is simply a glimpse into ongoing mismanagement of the Colorado River on the U.S. side of the border. 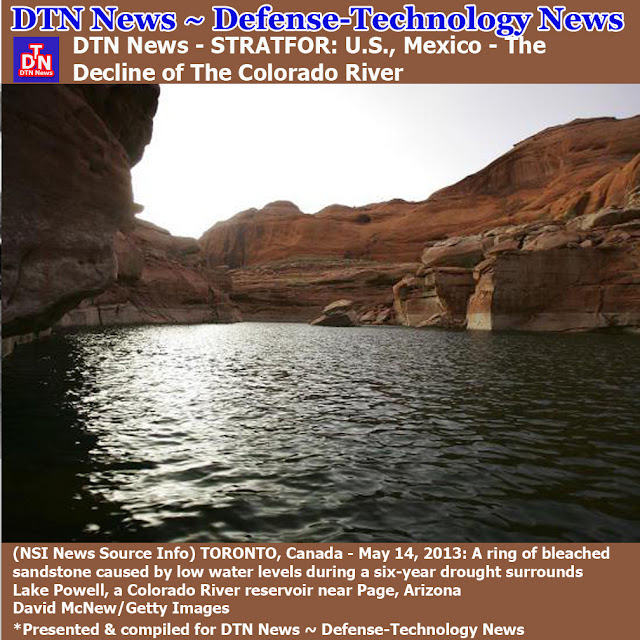 Over-allocation of the river's waters 90 years ago combined with increasing populations and economic growth in the river basin have created circumstances in which conservation efforts -- no matter how organized -- could be too little to overcome the projected water deficit that the Colorado River Basin will face in the next 20 years.

In 1922, the seven U.S. states in the Colorado River Basin established a compact to distribute the resources of the river. A border between the Upper and Lower basins was defined at Lees Ferry, Ariz. The Upper Basin (Wyoming, Colorado, Utah and New Mexico) was allocated 9.25 billion cubic meters a year, and the Lower Basin (Arizona, California and Nevada) was allotted 10.45 billion cubic meters. Mexico was allowed an unspecified amount, which in 1944 was defined as 1.85 billion cubic meters a year. The Upper and Lower basins -- managed as separate organizations under the supervision of the U.S. Bureau of Reclamation -- divided their allocated water among the states in their jurisdictions. Numerous disputes arose, especially in the Lower Basin, regarding proper division of the water resources. But the use of (and disputes over) the Colorado River began long before these treaties.

As the United States' territory expanded to the west, the Colorado River briefly was considered a portal to the isolated frontier of the southwestern United States, since it was often cheaper to take a longer path via water to transport goods and people in the early 19th century. There was a short-lived effort to develop the Colorado River as the "Mississippi of the West." While places like Yuma, Ariz., became military and trading outposts, the geography and erratic flow of the Colorado made the river ultimately unsuitable for mass transportation. Navigating the river often required maneuvering around exposed sand banks and through shallow waters. The advent of the railroad ended the need for river transport in the region. Shortly thereafter, large and ambitious management projects, including the Hoover Dam, became the river's main purpose.
Irrigation along the river started expanding in the second half of the 19th century, and agriculture still consumes more water from the Colorado than any other sector. Large-scale manipulation of the river began in the early 20th century, and now there are more than 20 major dams along the Colorado River, along with reservoirs such as Lake Powell and Lake Mead, and large canals that bring water to areas of the Imperial and Coachella valleys in southern California for irrigation and municipal supplies. User priority on the Colorado River is determined by the first "useful purposing" of the water. For example, the irrigated agriculture in California has priority over some municipal water supplies for Phoenix, Ariz.

When the original total allocation of the river was set in the 1920s, it was far above regional consumption. But it was also more than the river could supply in the long term. The river was divided based on an estimated annual flow of roughly 21 billion cubic meters per year. More recent studies have indicated that the 20th century, and especially the 1920s, was a time of above-normal flows. These studies indicate that the long-term average of flow is closer to 18 billion cubic meters, with yearly flows ranging anywhere from roughly 6 billion cubic meters to nearly 25 billion cubic meters. As utilization has increased, the deficit between flow and allocation has become more apparent.
Total allocations of river resources for the Upper and Lower basins and Mexico plus water lost to evaporation adds up to more than 21 billion cubic meters per year. Currently, the Upper Basin does not use the full portion of its allocation, and large reservoirs along the river can help meet the demand of the Lower Basin. Populations in the region are expected to increase; in some states, the population could double by 2030. A study released at the end of 2012 by the U.S. Bureau of Reclamation predicted a possible shortage of 3 billion cubic meters by 2035.
The Colorado River provides water for irrigation of roughly 15 percent of the crops in the United States, including vegetables, fruits, cotton, alfalfa and hay. It also provides municipal water supplies for large cities, such as Phoenix, Tucson, Los Angeles, San Diego and Las Vegas, accounting for more than half of the water supply in many of these areas. Minute 319, signed in November 2012, gives Mexico a small amount of additional water in an attempt to restore the delta region. However, the macroeconomic impact on Mexico is minimal, since agriculture accounts for the majority of the river's use in Mexico but only about 3 percent of the gross domestic product of the Baja Norte province.
There is an imbalance of power along the international border. The United States controls the headwaters of the Colorado River and also has a greater macroeconomic interest in maintaining the supply of water from the river. This can make individual amendments of the 1944 Treaty somewhat misleading. Because of the erratic nature of the river, the treaty effectively promises more water than the river can provide each year. Cooperation in conservation efforts and in finding alternative water sources on the U.S. side of the border, not treaty amendments, will become increasingly important as regional water use increases over the coming decades.

Conservation Efforts Along the Colorado

The U.S. Bureau of Reclamation oversees the whole river, but the management of each basin is separate. Additionally, within each basin, there are separate state management agencies and, within each state, separate regional management agencies. Given the number of participants, reaching agreements on the best method of conservation or the best alternative source of water is difficult. There are ongoing efforts at conservation, including lining canals to reduce seepage and programs to limit municipal water use. However, there is no basin-wide coordination. In a 2012 report, the Bureau of Reclamation compiled a list of suggested projects but stopped short of recommending a course of action.
A similar report released in 2008 listed 12 general options including desalinization, vegetation management (elimination of water-intensive or invasive plants), water reuse, reduced use by power plants and joint management through water banking (water is stored either in reservoirs or in underground aquifers to use when needed). Various sources of water imports from other river basins or even icebergs are proposed as options, as is weather modification by seeding clouds in the Upper Basin. Implementation of all these options would result in an extra 5 billion cubic meters of water a year at most, which could erase the predicted deficit. However, this amount is unlikely, as it assumes maximum output from each technique and also assumes the implementation of all proposed methods, many of which are controversial either politically or environmentally and some of which are economically unviable. Additionally, many of the methods would take years to fully implement and produce their maximum capacity. Even then, a more reasonable estimate of conservation capacity would likely be closer to 1 billion-2 billion cubic meters, which would fall short of the projected deficit in 2035.

The Potential for New Disputes

Conflict over water can arise when there are competing interests for limited resources. This is seen throughout the world with rivers that traverse borders in places like Central Asia and North Africa. For the Colorado River, the U.S.-Mexico border is likely less relevant to the competition for the river's resources than the artificial border drawn at Lees Ferry.
Aside from growing populations, increased energy production from unconventional hydrocarbon sources in the Upper Basin has the potential to increase consumption. While this amount will likely be small compared to overall allocations, it emphasizes the value of water to the Upper Basin. Real or perceived threats to the Upper Basin's surplus of water could be seen as threats to economic growth in the region. At the same time, further water shortages could limit the potential for economic growth in the Lower Basin -- a situation that would only be exacerbated by growing populations.
While necessary, conservation efforts and the search for alternative sources likely will not be able to make up for the predicted shortage. Amendments to the original treaty typically have been issued to address symptomatic problems. However, the core problem remains: More water is promised to river users than is available on average. While this problem has not come to a head yet, there may come a time when regional growth overtakes conservation efforts. It is then that renegotiation of the treaty with a more realistic view of the river's volume will become necessary. Any renegotiation will be filled with conflict, but most of that likely will be contained in the United States.
Read more: U.S., Mexico: The Decline of the Colorado River | Stratfor
*Link for This article compiled by Roger Smith from reliable sources Stratfor
*Speaking Image - Creation of DTN News ~ Defense Technology News
*Photograph: IPF (International Pool of Friends) + DTN News / otherwise source stated
*This article is being posted from Toronto, Canada By DTN News ~ Defense-Technology News Contact:dtnnews@ymail.com
©COPYRIGHT (C) DTN NEWS DEFENSE-TECHNOLOGY NEWS