Source: DTN News - - This article compiled by Roger Smith from reliable sources Lara Jakes - AP
(NSI News Source Info) TORONTO, Canada - June 10, 2013: The Obama administration faced fresh anger Monday at home and abroad over U.S. spy programs that track phone and Internet messages around the world in the hope of thwarting terrorist threats. But a senior intelligence official said there are no plans to end the secretive surveillance systems. 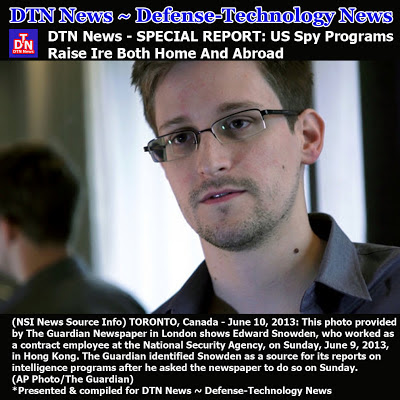 The programs causing the global uproar were revealed by Edward Snowden, a 29-year-old employee of government contractor Booz Allen Hamilton. Snowden, whose identity was revealed at his own request, has fled to Hong Kong in hopes of escaping criminal charges. Sen. Dianne Feinstein of California, who heads the Senate Intelligence Committee and supports the surveillance, accused Snowden of committing an "act of treason" and said he should be prosecuted.