*The MoD must do more to retain the Gurkhas’ unique skills, writes Nick Harvey

Source: DTN News - - This article compiled by Roger Smith from reliable sources Nick Harvey
(NSI News Source Info) TORONTO, Canada - June 8, 2013: Gurkhas are a widely admired, loved and revered part of the British Army. But strangely, five years after allowing them to settle here after completing their service, we still don't routinely recruit them to the reserves when they leave, despite their desire to continue to serve. At the same time, there are serious concerns about whether we can meet the ambitious new targets as part of the Army 2020 vision and restructure in which the reserves will play a vital role. It seems a no-brainer that we should retain some of the toughest and bravest fighters we have, and instead help them lead the way for the future reserves. 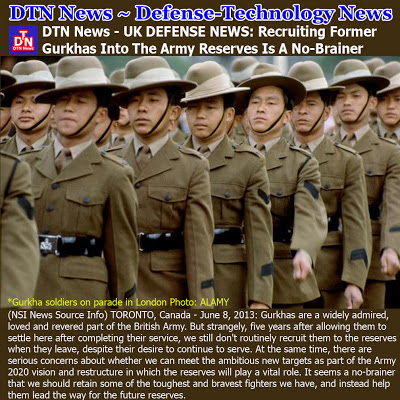