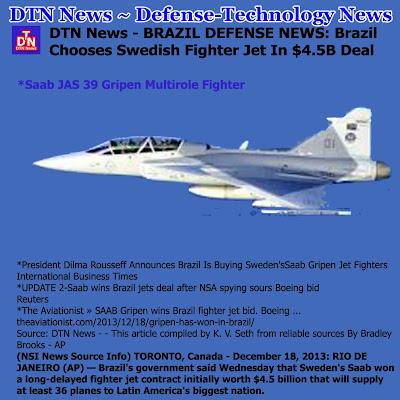 The decision comes as Brazil seeks to ramp up its defense capabilities to patrol a porous land border that's more than 9,300 miles (15,000 kilometers) long, much of it covered by jungle, over which arms and drugs easily flow. Brazil is also seeking better protection for massive offshore oil fields that it has discovered in recent years.

Brazil's Defense Minister Celso Amorim said that the choice after some 15 years of debate was made after "careful study and consideration, taking into account performance, transfer of technology and cost, not just of acquisition but of maintenance. The choice was made on the best balance of these three factors."

Swedish Foreign Minister Carl Bildt wrote on Twitter that the decision was "a tribute to Swedish technology and competitiveness."

The decision to buy the Swedish jet over Boeing's F-18 Super Hornet or France's Dassault Rafale came as a surprise to many. The French jet had been favored by former Brazilian President Luiz Inacio Lula da Silva, while current leader Dilma Rousseff had been said to favor the Boeing bid.

Some analysts said the Boeing jet was hurt by the fallout over revelations six months ago that the U.S. National Security Agency carried out a massive espionage program that directly targeted Rousseff's own communications.

That led to Rousseff canceling a planned state visit to Washington in October.

"Dilma had been favoring the Boeing plane and a lot of people thought she would announce her decision during her state visit to Washington," said David Fleischer, a political scientist at the University of Brasilia. "Boeing was very close but then the NSA booted them out of the air."

Others, however, contend the Swedish jet, which was favored by Brazil's Air Force, according to an internal assessment leaked to the Folha de S.Paulo newspaper in 2010, was always going to win the competition and that the decision had little to do with the NSA spy revelations.

Alexandre Barros, a political risk consultant with the Brasilia-based firm Early Warning, said many in the government had long opposed Boeing because the company's bid was less flexible in terms of technology transfers than the two European plane makers and also because they were wary of becoming indebted to Washington.

"The Americans tend to think that if you buy arms from them you are automatically their allies," said Barros. "Brazil doesn't want that kind of link."

He said that Brazilian officials long prized their autonomy from the U.S., and as the main power in South America they don't want to be in the position of being perceived as having to support American policies on the continent, particularly in Colombia and Venezuela. Part of the draw of Saab's bid was that Sweden doesn't have any political clout in the region.

Regardless of the main reasons, Brazil's military hopes the government making the decision after some 15 years of debate will lead to advances in its defense capabilities.

Brazil in the mid-1980s had the largest defense industry in the developing world. It became the world's eighth-largest arms exporter amid strong demand for its armored personnel carriers, reconnaissance and anti-aircraft vehicles, troop carriers and rocket launchers.

However, the industry went into a tailspin when the Cold War ended and demand for weapons declined. In 1990, Brazil's two largest arms manufacturers, Engesa and Avibras, sought protection from creditors for debts of about $200 million.