A reformulated and expanded Chinese Coast Guard is still working out a unified command structure, according to Susan Shirk, a former Clinton administration official who met with representatives of the branch in July. China’s fighter jet pilots get far less training than their regional counterparts, said Ian Easton, a research fellow at the Project 2049 Institute in Arlington, Virginia. 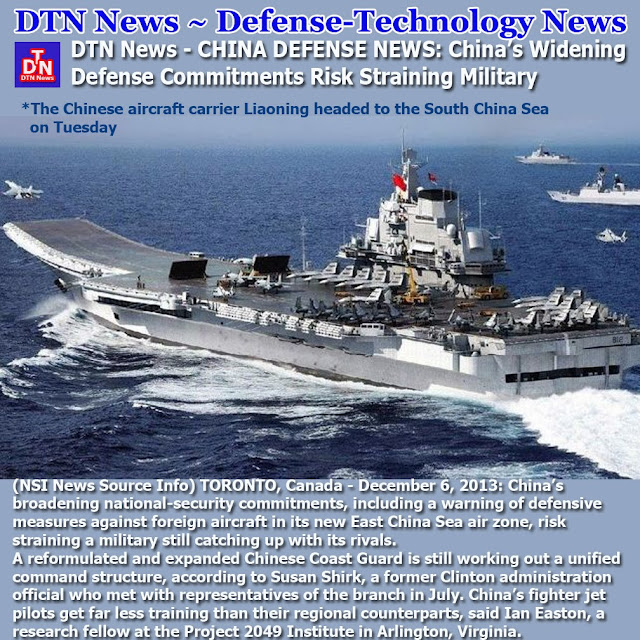 While defense spending has more than doubled since 2006, China is still modernizing its forces even as the U.S. dedicates more military resources to the Asia-Pacific and Japan expands its own navy. The relative gap indicates the capacity of China - - which also is advancing naval deployments in waters it claims in the South China Sea -- to sustain challenges to incursions over East China Sea airspace may be constrained.
“It’s the old line from Top Gun: Their mouth is writing checks that their body can’t cash,” said Richard Bitzinger, a senior fellow at the S. Rajaratnam School of International Studies who analyzes Chinese military modernization, referring to the 1986 Tom Cruise movie. “Really their ability to actually monitor let alone enforce such a huge swath of territory is probably well outside their capabilities.”

Advances in stealth technology, missile defense and shipbuilding all point to the rise of a military whose focus has broadened from national defense and recapturing Taiwan to longer-range force projection. A 2013 U.S. Department of Defense report said China’s broader military interests include “advancing territorial claims and building influence abroad.”
At the same time, that military modernization, which has drawn expressions of concern from neighbors as well as the U.S., masks deeper problems such as entrenched corruption within the ranks and insufficient, rigid training for pilots who are constrained by risk-averse political officers, according to the Project 2049 Institute’s Easton.
Corruption in the military, which may include officers who drive luxury cars and pay for vacations with public funds, undermines the army’s effectiveness, retired Major General Luo Yuan wrote in the Chinese version of the state-owned Global Times in February.

Even stepping up patrols around islands in the East China Sea also claimed by Japan -- called Senkaku in Japanese and Diaoyu in Chinese -- have strained the military, saidShirk, who served under President Bill Clinton as deputy assistant secretary of state for East Asia and the Pacific.
“I know from discussions with the new Chinese Coast Guard this summer that just the patrols out to the Diaoyu Islands was definitely stretching their capability,” said Shirk, now chair of the 21st Century China Program at the University of California San Diego. “They took all these ships and painted new Coast Guard signs on them, but the task of integrating them into a unified command will take a long time.”
China’s level of military modernization doesn’t compare with the world’s advanced armed forces, Xu Qiliang, vice chairman of the Central Military Commission, wrote in a book explaining reforms outlined in a Communist Party meeting last month. There is a “large gap” between the military and the needs of national security, Xu said.

The creation of the defense zone, which covers the islands also claimed by Japan, provoked criticism from leaders including U.S. Vice President Joseph Biden, who visited Japan and China this week. He said China’s move, announced Nov. 23, has caused “significant apprehension in the region.” The U.S. operates air defense identification zones including along the east and west coasts, Alaska and Hawaii.
China will bear “increasing responsibility to contribute positively to peace and security,” Biden said in a speech in Beijing yesterday. “That means taking steps to reduce the risks of accidental conflict and miscalculation.”
As China gathers strength in the Asia-Pacific it will have to compete with a much larger U.S. military -- whose Air Force alone has more than 400 surveillance planes compared to China’s 100 in all its armed forces, for example -- as the Obama administration conducts what it calls a rebalance to the region.
Among the U.S. goals was to position about 60 percent of the Pentagon’s naval assets in the region by 2020, from about 50 percent previously, then-Secretary of Defense Leon Panetta said last year. Pentagon officials reached an agreement with Australia to shift about 2,500 Marines there from Okinawa, Japan, where their presence has drawn opposition from local residents.

Japan is bolstering its forces as well. Prime Minister Shinzo Abe increased the defense budgetin 2013 for the first time in 11 years. The Defense Ministry wants another budget increase for next year, a move that would return military spending to its highest level since 2005. Abe’s government is putting the finishing touches on the country’s first postwar national security strategy.
Among the items included in the Japanese ministry’s latest budget request were 1.5 billion yen ($14.7 million) for amphibious training facilities and 1.6 billion yen to build a military facility on the tiny island of Yonaguni, close to the area disputed with China.
Training within China’s air force has been a challenge for years, according to Easton. In 2011, the military revamped training for fighter pilots to put new emphasis on aerial combat skills as well as academic training, according to the official Xinhua News Agency.

“Chinese Air Force pilots still typically get less than ten hours of flight time a month, well below regional standards,” Easton said. “The training they do engage in tends to be highly scripted and they generally avoid flying at night or over water because it is dangerous and the political officers in control are inherently risk adverse.”
Nonetheless, the Chinese military hasn’t stood still. Military spending for 2013 was set to set to rise to 740.6 billion yuan ($121.6 billion) from 669.1 billion yuan, a 10.7 percent hike, after a similar jump the year before. That’s about five times less than the U.S. spends.
It’s also looking to close the gap with the U.S. China’s navy has promised more aircraft carriers bigger than its first, commissioned last year. China’s military has deployed missile systems capable of destroying aircraft carriers such as those in operation by the U.S. in Asia.

With so much advancement, China will be able to monitor the air defense zone in the East China Sea, though the timing of the announcement and the way the government explained it raises questions about leaders’ strategy, according to Huang Jing, a professor at the National University of Singapore who focuses on Chinese politics.
“I’m very confident that this declaration of an air-defense identification zone is backed up by capability but the timing is very, very bad and the way they explained it is very inept,” Huang said.
Corruption within the military also may not play the undermining role that even Chinese generals fear it will, according to Sameer Patil, associate fellow at Gateway House: Indian Council on Global Relations.
“Corruption can erode any institution, more particularly so in case of armed forces’ technical capacity,” Patil said. “However, this does not mean that the Chinese do not have a powerful air force or military capacity with which they can assert their territorial claims.”

One looming concern is that China’s forces, stretched across multiple areas, may get into accidents that could provoke a crisis. China’s Defense Ministry says it won’t rule out setting up other air defense zones in the future.
“The question is, do you want to spend all that time, and effort and money basically proving a point?” Bitzinger said. “And not exactly proving a very important point. They’re going to have to be selective about everything they do. They don’t have the capabilities to be everywhere and to really prove their point everywhere.”
To contact Bloomberg News staff for this story: Sharon Chen in Singapore atschen462@bloomberg.net; Isabel Reynolds in Tokyo at ireynolds1@bloomberg.net; Shai Oster in Hong Kong at soster@bloomberg.net
To contact the editor responsible for this story: Rosalind Mathieson atrmathieson3@bloomberg.net