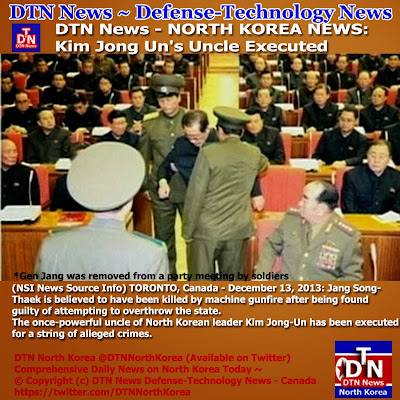 (NSI News Source Info) TORONTO, Canada - December 13, 2013: Jang Song-Thaek is believed to have been killed by machine gunfire after being found guilty of attempting to overthrow the state.

The once-powerful uncle of North Korean leader Kim Jong-Un has been executed for a string of alleged crimes.

Gen Jang was executed on Thursday shortly after a special military trial, the agency reported, after committing such a "hideous crime as attempting to overthrow the state by all sorts of intrigues and despicable methods with a wild ambition to grab the supreme power of our party and state".

South Korean media say they believe he was killed by machine gunfire - a relatively common form of execution in the North.

The announcement comes days after Pyongyang announced that Gen Jang had been removed from all his posts because of allegations of corruption, drug use, gambling, womanising, generally leading a "dissolute and depraved life" and "dreaming different dreams".

He was once considered the second most powerful official in the North.

He was seen as helping Mr Kim consolidate power after the death of his father, Kim Jong-Il, two years ago.

Gen Jang is the latest and most significant in a series of personnel reshuffles that Mr Kim has conducted in an apparent effort to bolster his power.

In a viciously-worded attack, the regime accused Gen Jang of betraying the trust of both Mr Kim and his father, saying he had received "deeper trust" from the younger leader in particular.

Branding Gen Jang "despicable human scum ... worse than a dog", the regime accused him of attempting to stand in the way of Mr Kim's succession, according to KCNA.

Gen Jang, who was married to the sister of the late Kim Jong-Il, played a key role in cementing the leadership of the inexperienced new leader.

But analysts say the 67-year-old's power and influence had become increasingly resented by his nephew, who is aged around 30.

Gen Jang - seen as Mr Kim's political regent and the country's unofficial number two - had earlier been stripped of all posts and titles, with the regime accusing him of corruption and building a rival power base.

State TV this week showed photos of Gen Jang being dragged out of his seat at a meeting by two officers, in an extremely rare public humiliation of a figure who was then demonised as a drug-taking womaniser.

"North Korea is now engaged in a reign of terror while carrying out a massive purge to consolidate the power of Kim Jong-Un," she told a cabinet meeting, according to her office.

The Kim family has ruled the North for six decades with an iron fist, regularly purging those showing the slightest sign of dissent. Most are executed or sent to prison camps. 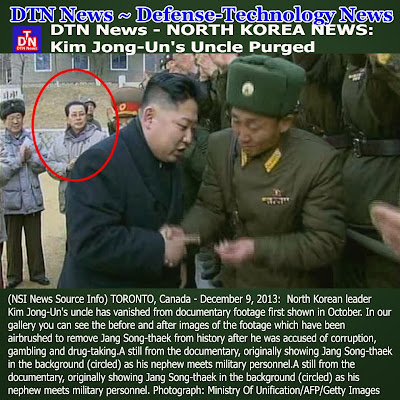 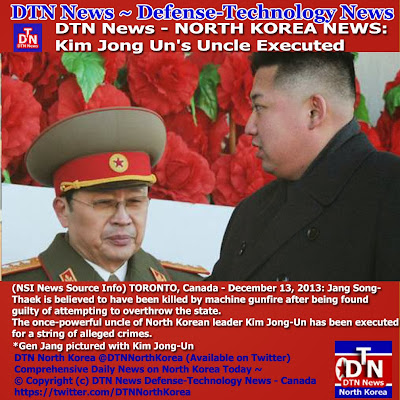