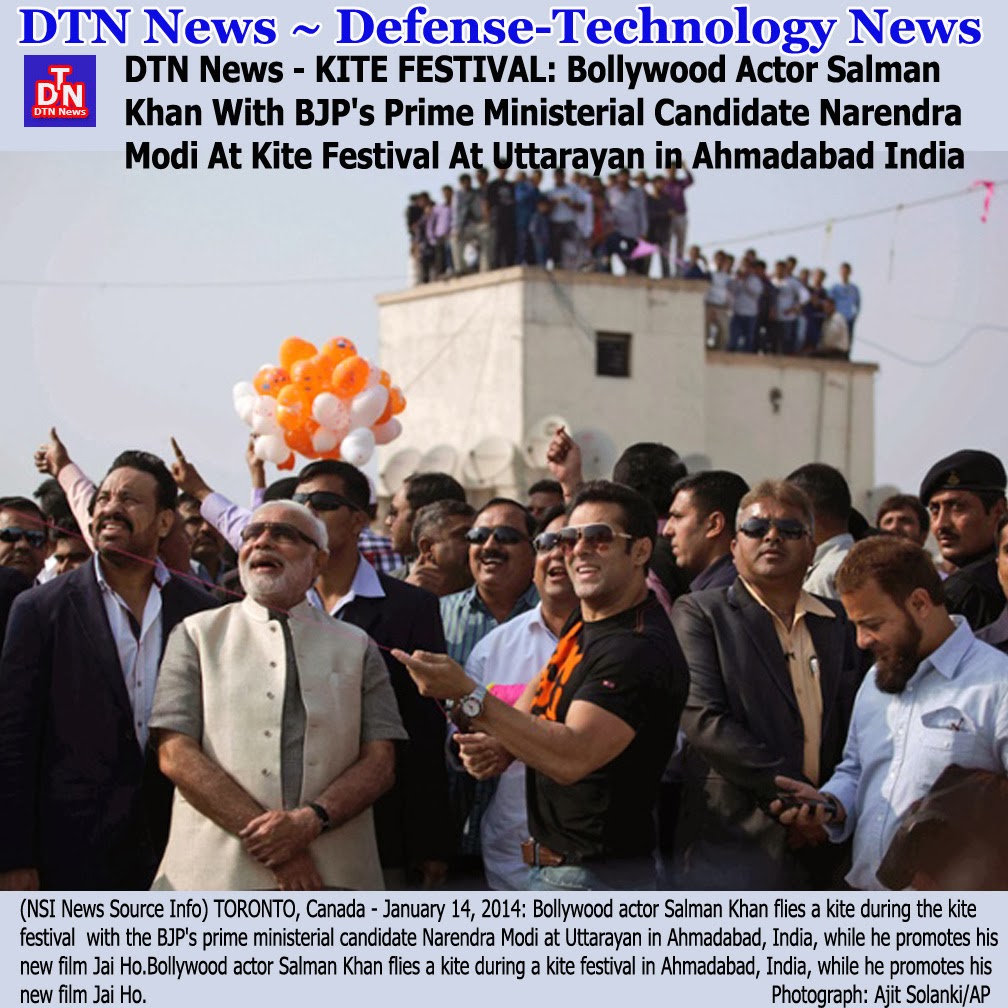 Actor Salman Khan spent an afternoon with the BJP's prime ministerial candidate Narendra Modi on the kite-flying festival of Uttarayan or Makar Sankranti.

"God will decide who is the best man for the country. May the best man win," said Mr Khan while interacting with reporters in Ahmedabad, who asked him if he endorses Mr Modi for the country's top job. "Modi saab should be able to fulfill his destiny," said the 48-year-old superstar, whose new film Jai Ho releases on January 24. (Watch Video Here)

"He is a great man, I have not seen this sort of development elsewhere," Mr Khan said. (Kai Po Che! Salman Khan flies a kite with Narendra Modi). But he also said voters must decide who is most suitable. "If you think Modi saab is best for you, vote for him. Vote for the best man in your constituency," he said, adding,"For you it's Modi. In my constituency Bandra,  they are Baba Siddique and Priya Dutt."

Mr Modi's smile appeared a little pained at that point. Both Mr Siddique and Ms Dutt are Congress leaders. (Pic of the day: You choose)

The Gujarat Chief Minister is described by his critics as a divisive leader who failed to protect hundreds of Muslims during communal riots in 2002 in his state. A court recently found that there is no evidence to merit his prosecution for complicity in the violence, as alleged by his opponents. It also upheld a Supreme Court investigation that had cleared Mr Modi.

Last week, Salman Khan was dragged into a political controversy over his dance performance at a festival in Uttar Pradesh, where thousands of people in riot-hit Muzaffarnagar are struggling to survive. (Shah Rukh Khan defends Salman's decision to perform in Saifai)

Defending himself, Mr Khan said his NGO, Being Human, had pledged to fund surgeries on 200 children in the state on behalf of all artistes who performed at the event. "We did our job. We just went for that one event, we have got to do nothing with any political party," he said. (Watch: 'We went to Saifai only to entertain')

Mr Khan is being tried for culpable homicide not amounting to murder in a court in Mumbai for running over five people with his SUV in 2002. (Salman Khan hit-and-run case: trial deferred to January 21)

He spent a few days in a Rajasthan jail in 2007 for allegedly shooting a black-buck deer.