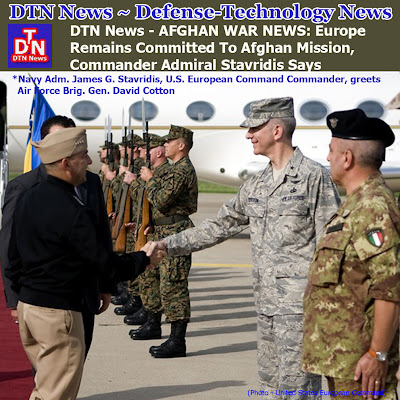 The admiral said he sees no reason to change the strategy in Afghanistan of transitioning security responsibility to Afghan forces in response to violent uprisings that began there last week after it was learned that some U.S. forces had inadvertently burned copies of the Quran.
“As I look at the broad sweep of our strategy there, I am convinced that we should continue with transitioning Afghanistan’s security to the Afghans,” Stavridis said. “In my conversations – I’ve had many over last week or so with senior leaders in the alliance – there’s solid support on the European side to continue with current strategy.”
Stavridis noted that about 150 demonstrations had left 30 people killed and 150 wounded. “That’s significant activity, but it’s been very much diffused around the country,” he said, adding that Marine Corps Gen. John R. Allen, commander of U.S. and NATO forces in Afghanistan, has said he is pleased with Afghan security forces’ ability to contain the violence.
“If you step back and look at the larger progression in Afghanistan, I remain cautiously optimistic that we can succeed there,” the admiral said. Two years ago, when U.S. and British Marines moved into Marjah, there were 10 coalition troops to every Afghan soldier. Today, there are two Afghan soldiers for every coalition member, he said.
Stavridis said he expects Allen will lay out a “definitive track” in mid-summer for the drawdown of coalition forces. “It has to be conditions-based as we go forward,” he said.
NATO Secretary General Anders Fogh Rasmussen has a “high-level goal” of signing a long-term strategic partnership agreement with Afghanistan, showing NATO’s “strong willingness to go forward,” Stavridis said. “I think we will see an enduring relationship between NATO and the Republic of Afghanistan,” he added.
Stavridis told the Senators he will provide them with a classified report on the recent violence in Afghanistan, and in response to a question, said the uprisings appear to be a combination of spontaneous demonstrations and Taliban-driven activity.
The admiral also spoke about the importance of U.S.-European partnerships, noting that European countries have 40,000 troops in Afghanistan and lead operations in the Balkans. Speaking to the need for a continued U.S. presence in Europe, he said, “It does matter that we continue to have Europe as our partner of first resort.”
However, he said, he repeatedly has urged European nations to spend more on defense capabilities. The United States spends about 4.5 percent of its gross domestic product on defense, he said, and members of the European Union have pledged to spend 2 percent of each of theirs, but only some are meeting that goal, with most spending only about 1.5 percent of GDP on defense, he said.
“They should spend more, and if they would spend more, it would permit the United States to spend less,” Stavridis said. “I think the United States should press this very hard.”
Also at the hearings, the general gave his assessment of NATO’s capabilities in cyber defense. “We are in the process of catching up,” he said. “We have hard work to do in cyber.”
NATO’s progress on cyber is evident at the recently created Cyber Center of Excellence in Estonia, and in a computer response center being added in the NATO headquarters building in Brussels, the admiral said. Estonia, Latvia, Lithuania and Georgia have had “fairly severe” cyber attacks in recent years, he noted.
Cyber defense was included in the 2010 NATO Strategic Concept, and Stavridis said he expects it to be discussed at the upcoming summit.
European governments struggle with public-private cooperation on cyber defense just as Americans do, he said. “We have more thinking and talking to do within the U.S. military structure as to the precise authorities and structures” in U.S. Cyber Command.
*Link for This article compiled by Roger Smith from reliable sources By Lisa Daniel - American Forces Press Service*Speaking Image - Creation of DTN News ~ Defense Technology News *This article is being posted from Toronto, Canada By DTN News ~ Defense-Technology News Contact:dtnnews@ymail.com ©COPYRIGHT (C) DTN NEWS DEFENSE-TECHNOLOGY NEWS