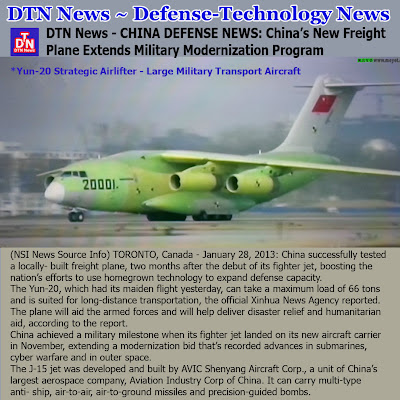 The Yun-20, which had its maiden flight yesterday, can take a maximum load of 66 tons and is suited for long-distance transportation, the official Xinhua News Agency reported. The plane will aid the armed forces and will help deliver disaster relief and humanitarian aid, according to the report.
China achieved a military milestone when its fighter jet landed on its new aircraft carrier in November, extending a modernization bid that’s recorded advances in submarines, cyber warfare and in outer space.
The J-15 jet was developed and built by AVIC Shenyang Aircraft Corp., a unit of China’s largest aerospace company, Aviation Industry Corp of China. It can carry multi-type anti- ship, air-to-air, air-to-ground missiles and precision-guided bombs.
The aircraft tests underscore China’s progress in military modernization, which has been accompanied by a doubling of the defense budget in six years. China, the biggest spender on defense after the U.S., has become increasingly assertive in the region as President Barack Obama executes a strategic shift toward Asia and tensions rise with Japan and other nations over territorial disputes.
China’s defense spending, estimated at 670 billion yuan ($108 billion) in 2012, has more than doubled since 2006, tracking a rise in nominal gross domestic product to 47.2 trillion yuan from 21.6 trillion yuan. 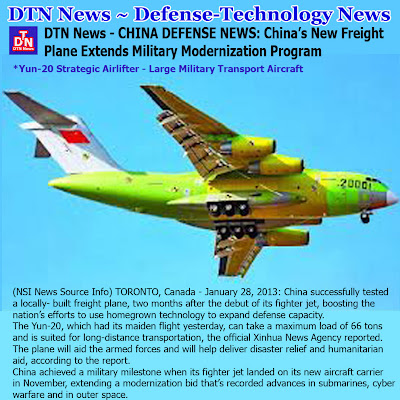 The Yun-20, or Transport-20, is designed for long-distance air transport of both cargo and passengers, Xinhua reported.
"The successful maiden flight of Yun-20 is significant in promoting China's economic and national defence build-up as well as bettering its emergency handling such as disaster relief and humanitarian aid," Xinhua said, adding that further test flights are scheduled.
China is determined to reduce dependency on foreign firms such as Boeing, Airbus, General Electric and Rolls-Royce for the country's rising demand for planes and engines.
Aviation Industry Corporation of China (AVIC), the country's dominant military and commercial aviation contractor, has lobbied for Beijing to back a multi-billion dollar plan to build a high-performance engine.
Meanwhile a host of design flaws has delayed approval by the Civil Aviation Administration of China for the country's homegrown 90-seat ARJ21 regional passenger jet.
At last November's China Airshow, China unveiled 50 new orders for its COMAC C919 passenger jet which is designed to challenge Airbus and Boeing in the USD$100 billion annual airliner market.
The orders for the 150-seat jet boosted the official tally to 380, reaching the state-owned Commercial Aircraft Corporation of China's declared breakeven point of 300-400 orders.
However, analysts say it will be some time before the aircraft, due to make its maiden flight in 2014, proves both its technical worth and its financial viability.