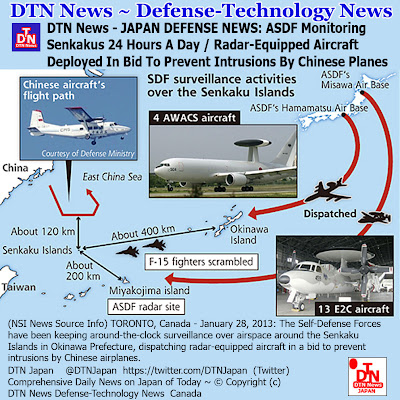 Air Self-Defense Force aircraft were dispatched to Okinawa Prefecture after a Chinese airplane intruded into Japanese airspace on Dec. 13, when the ASDF failed to promptly scramble fighters as a ground radar in the area was unable to detect the low-flying plane.
On Jan. 15, the ASDF scrambled fighters to the Senkaku Islands after a propeller-driven airplane belonging to China's State Oceanic Administration flew about 120 kilometers north of Kubajima, one of the islets.
If the airplane had flown at 300 kph, it would have taken just 20 minutes or so to intrude into Japanese airspace at a distance of 22 kilometers from the island.

The Jan. 15 scramble was one of seven ordered by the ASDF since the airplane belonging to the Chinese agency intruded into Japanese airspace on Dec. 13. The other six occurred on Dec. 22, 24, 25 and 26, and on Jan. 5 and 11. Each time, Chinese aircraft came close to 100 kilometers of entering Japanese airspace.

The ASDF has scrambled fighters against Chinese aircraft in the East China Sea and its surrounding areas 160 times from April to December last year, already surpassing the 156 times recorded in fiscal 2011.

During such operations, China's airborne early warning planes and other kinds of military aircraft were often spotted, according to ASDF officials. 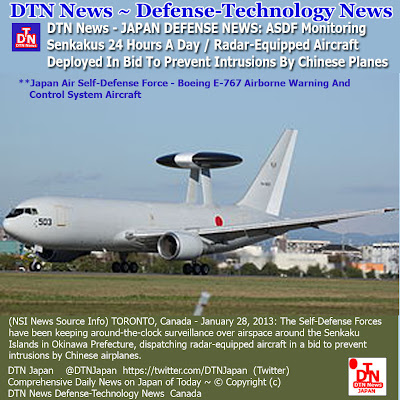 The ASDF deploys F-15 fighters from Naha Air Base, about 400 kilometers from the Senkaku Islands. The fighters first transmit a warning to Chinese aircraft in English to change course before swinging their main wings as a warning against entering Japanese airspace.

In the past, ASDF aircraft fired warning shots when a Soviet Union military plane flew over Okinawa Island in 1987. "We'll carefully examine" whether to take similar actions against Chinese aircraft, a senior Defense Ministry official said.

So far, the Chinese aircraft have always flown in from northwest of the Senkaku Islands before heading east and ultimately returning to the Chinese mainland.

"China is saying that it regularly patrols its own airspace [by dispatching its aircraft near the Senkaku Islands]," a senior ASDF official said. "To protect our airspace, it's necessary for us to detect approaching Chinese aircraft as quickly as possible."
===
Monitoring could strain crews
The radar facility closest to the Senkaku Islands is about 200 kilometers away on Miyakojima island, Okinawa Prefecture. However, the facility has difficulty detecting aircraft flying at low altitudes of several hundred meters due to the curvature of the Earth.
By contrast, there is no such blind spot around Hokkaido as it has six radar facilities on its coast that were originally built to prepare for any intrusion by Soviet aircraft. 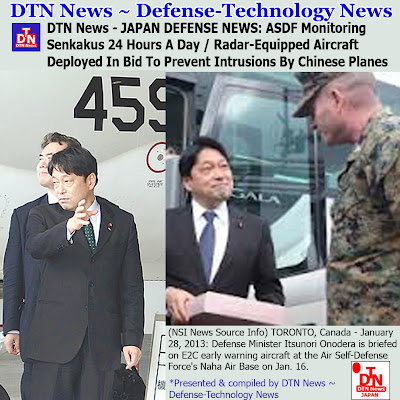 In an attempt to prevent further intrusions by Chinese aircraft, the ASDF has decided to monitor the area around the Senkaku Islands around-the-clock by deploying four Airborne Warning and Control System (AWACS) planes from its Hamamatsu Air Base in Shizuoka Prefecture. Thirteen E2C early-warning surveillance airplanes from its Misawa Air Base in Aomori Prefecture have also been deployed.

However, dispatching surveillance airplanes alone is not enough if the ASDF wants to continually monitor the area, according to a former ASDF pilot.

Therefore, in the long run, it is necessary to improve the surveillance system for the Nansei Islands, which include the Senkaku Islands.

The Defense Ministry has been considering developing a new type of radar that can detect small aircraft at a distance, as well as sending F-15 fighters to Shimojishima Airport, about 200 kilometers from the Senkaku Islands.

"We'll do whatever we can," the senior Defense Ministry official said. He added that his colleague have also come up with an idea to examine a method developed in the United States that involves the use of a huge balloon equipped with a radar to monitor the situation from a high altitude.
===
ASDF becomes involved
Some Defense Ministry officials have expressed concerns that the dispute over the Senkaku Islands is now involving the ASDF.

Since Japan's nationalization of the islets in September, Haijian ships and other vessels belonging to China's State Oceanic Administration have repeatedly intruded into Japanese waters.

Japan Coast Guard patrol ships responded to the vessels, while Maritime Self-Defense Force destroyers monitored waters from a distance rather than near the islets, in an effort not to incite conflict.

However, the ASDF is the only organization equipped with aircraft that can respond if Chinese aircraft intrude into Japanese airspace.

"Tensions have escalated as the ASDF has become involved [for surveillance over the Senkakus]," a senior Defense Ministry official said