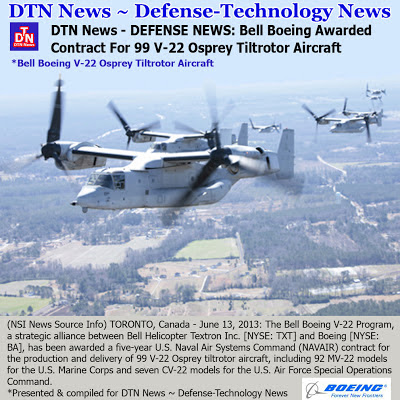 Valued at approximately $6.5 billion, the contract is structured to provide nearly $1 billion in savings to the U.S. government compared with procurements through single-year contracts. The contract also includes a provision permitting NAVAIR to order up to 23 additional aircraft.
"Signing this contract speaks volumes towards the confidence our services have in the V-22 Osprey," said Marine Corps Col. Greg Masiello, V-22 Joint Program Office program manager.  "Since 2007, the V-22 has been continuously forward-deployed in a range of combat, humanitarian, and special operations roles. Ospreys continue to transform our Marine Corps Air Ground Task Force and Air Force Special Operations by enabling missions not possible with conventional aircraft, and helped save lives where others could not."
The V-22 Osprey is a joint service, multirole combat aircraft that uses tiltrotor technology to combine the speed and range of a fixed-wing airplane with the vertical performance of a helicopter. With its nacelles and rotors in vertical position, it can take off, land and hover like a helicopter. Once airborne, its nacelles can be rotated to transform the aircraft into a turboprop airplane capable of high-speed, high-altitude flight.
"The versatile V-22 Osprey is the ideal aircraft for an era when global militaries are being asked to do more with less," said Vince Tobin, executive director, Bell Boeing V-22 Program. "It gives operators the ability to achieve groundbreaking operational efficiencies and maximize the use of precious resources like time, money and personnel.  This contract will enable us to most efficiently build and deliver this aircraft to current and future customers around the world."
More than 200 V-22 Ospreys are currently in operation and the worldwide fleet has amassed more than 185,000 flight hours, with half of those hours logged in the past three years.
About Bell Boeing:
Bell Boeing is a strategic alliance between Bell Helicopter Textron Inc. and Boeing Defense, Space & Security.
Bell Helicopter, a wholly owned subsidiary of Textron Inc., is an industry-leading producer of commercial and military, manned and unmanned vertical lift aircraft and the pioneer of the revolutionary tiltrotor aircraft. Globally recognized for world-class customer service, innovation and superior quality, Bell's global workforce serves customers flying Bell aircraft in more than 120 countries. Textron Inc. is a multi-industry company that leverages its global network of aircraft, defense, industrial and finance businesses to provide customers with innovative solutions and services. Textron is known around the world for its powerful brands such as Bell Helicopter, Cessna Aircraft Company, Jacobsen, Kautex,Lycoming, E-Z-GO, Greenlee, Textron Systems and Textron Financial Corporation. More information is available at www.textron.com.
A unit of The Boeing Company, Boeing Defense, Space & Security is one of the world's largest defense, space and security businesses specializing in innovative and capabilities-driven customer solutions, and the world's largest and most versatile manufacturer of military aircraft. Headquartered in St. Louis, Boeing Defense, Space & Security is a $33 billion business with 59,000 employees worldwide. Follow us on Twitter: @BoeingDefense.
Contact:
Bill Schroeder
Bell Boeing V-22 Program
817-600-4209
wschroeder@bh.com
Andrew Lee
Boeing Vertical Lift Communications
610-291-6670
andrew.h.lee2@boeing.com