Source: DTN News - - This article compiled by Roger Smith from reliable sources Boeing
(NSI News Source Info) TORONTO, Canada - June 13, 2013: In an agreement that will save the U.S. government more than $800 million, the Army and Boeing [NYSE:BA] have signed a $4 billion multi-year contract for 177 CH-47F Chinook helicopters, with the Army holding options that could increase its total buy to 215 aircraft. 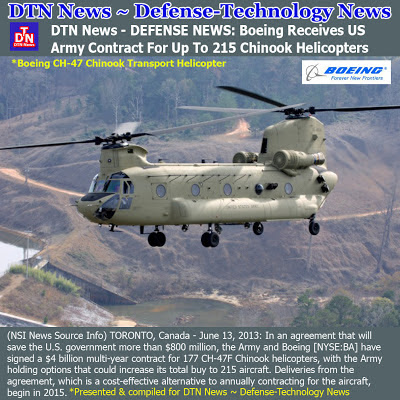 Deliveries from the agreement, which is a cost-effective alternative to annually contracting for the aircraft, begin in 2015.
“This multi-year contract provides unprecedented savings for the U.S. Army and American taxpayers,” said Col. Robert Barrie, U.S. Army project manager for Cargo Helicopters. “But the most important benefit is the continued support these aircraft will provide to soldiers in the field and civilians in distress.”
The tandem-rotor Chinook is the backbone of combat, logistics and humanitarian operations for the U.S. Army and 18 other operators around the world. This order would eventually bring the Army’s CH-47F total procurement close to its target of 464 aircraft, including 24 to replace peacetime attrition aircraft. The Army’s current inventory stands at 241 F-model aircraft.
There are 15 Army active duty and National Guard units operating the CH-47F, and a 16th is currently being equipped. CH-47F units have logged more than 86,000 combat hours in Afghanistan, maintaining an operational readiness rate of over 80 percent while conducting air assault, transport, and medical evacuation and support missions.
“The Army is benefiting not only from the efficiencies of a multi-year contract but also from the production efficiency gains Boeing and our suppliers have made,” said Chuck Dabundo, vice president, Boeing Cargo Helicopter Programs. “That includes the $130 million investment we made to modernize the Chinook factory. This contract will enable Boeing and our partners and suppliers in 45 states to bring stability to the workforce and to invest in production tooling, processes and other capital improvements.”
A unit of The Boeing Company, Boeing Defense, Space & Security is one of the world's largest defense, space and security businesses specializing in innovative and capabilities-driven customer solutions, and the world’s largest and most versatile manufacturer of military aircraft. Headquartered in St. Louis, Boeing Defense, Space & Security is a $33 billion business with 59,000 employees worldwide. Follow us on Twitter: @BoeingDefense.
Chinook b-roll video is available to media through the contacts below.
Contact:
Andrew Lee
Vertical Lift Communications
Boeing Defense, Space & Security
+1 610-591-6670
andrew.h.lee2@boeing.com
Tom Marinucci
Vertical Lift Communications
Boeing Defense, Space & Security
+1 610-591-7057
thomas.g.marinucci@boeing.com