India develops new UAVs
(NSI News Source Info) October 17, 2008: India is reportedly developing a new generation of UAVs designed to deploy laser target designators deep inside enemy territory."We are planning to base LTDs on UAVs to cut down the risk of our troops getting caught inside enemy territory while illuminating targets for attack and save the cost of sending another aircraft for doing the task," explained a senior Defence Ministry official. The new UAV project will be led by the DRDO, in partnership with the Army, Navy and the IAF. As IT Examiner previously reported, the crowded Indian defence market has led numerous officials to express concern over a perceived lack of indigenous self-reliance. To be sure, air chief marshall F M Major recently recommended that New Delhi reduce its dependency on aerospace imports by embarking on a "strategic shift [that] will offer the required thrust towards building skills and infrastructure for engineering and manufacturing."As such, the MoD has taken several notable steps to develop advanced military technology. For example, the Indian Combat Vehicles Research and Development Establishment (CVRDE) is designing a number of unmanned infantry combat vehicles. According to CVRDE director S Sundaresh, Medak Plant workers are fitting Russian infantry combat vehicles with advanced robotic components at a cost of Rs 60 crore. Sundaresh also noted that the all-terrain vehicles would be utilised to detect mines, as well as nuclear, biological and chemical weapons. In addition, the DRDO has announced plans to develop missiles that are lighter and less costly than current indigenous models. An independent centre for composite testing and evaluation is being established at the Hyderabad-based Advanced Systems Laboratory (ASL) -- which was primarily responsible for designing the long-range Agni missile. Avinash Chander, Director of the Laboratory under DRDO, explained that the ASL already maintains a composites production centre (Comproc) responsible for the fabrication of lightweight missile material. However, Chander noted that the ASL wanted to make "all the stages of the Agni missile composite structured."
Posted by Defense-Technology News at 10/17/2008 09:58:00 PM No comments: 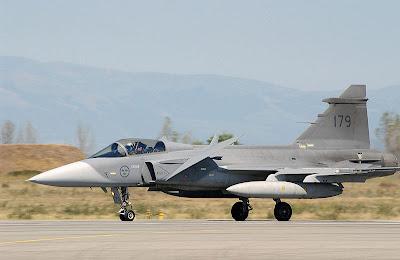 The Norwegian Defence and Security Industries Association (FSi), trade union Landsorganisasjonen (LO) and Norwegian Society of Engineers (NITO), with a total one million members, recommended in the report the authorities to invest in 48 new JAS 39 Gripen jets instead of in US F-35 Lightning II, know as Joint Strike Fighter (JSF), made by Lockheed Martin Corp. Gripen is manufactured by Swedish defence and aerospace group Saab AB. Gripen is the best alternative from the industrial perspective, FSi administrative director Torbjorn Svensgard told Norwegian daily Dagsavisen today. Gripen has already identified much more projects in Norway, to take part in, compared with JSF, and these projects are spread across the whole country. A JSF choice will have negative consequences for the expansion and further development of the Norwegian defence industry, according to the report. If Norway chooses Gripen, this will enable large production, as well as research and development, and more work places, FSi said. Although the report is important, the LO union has not taken a final position in the discussion yet, LO's leader Roar Flathen said. Norway's government is due to make a decision about the fighters before Christmas.

DoD Announces Non-Certification of Armed Reconnaissance Helicopter Program (NSI News Source Info) October 17, 2008: Yesterday, the Department of Defense notified the Congress and the contractor, Bell Helicopter, that it will not certify the U.S. Army Armed Reconnaissance Helicopter (ARH) program for continuation. John Young, undersecretary of defense for acquisition, technology and logistics, in consultation with senior Defense and Army officials, has determined that the fundamental cost and schedule basis underlying award of the ARH contract is no longer valid. The ARH contract was awarded for an expected development cost of $359 million and a procurement average unit cost of $8.56 million. Currently, DoD estimates that development will cost $942 million and the procurement average unit cost will be $14.48 million. Delivery of ARH to the Army was originally scheduled to take place by 2009, but the current projection is for 2013. “Rather than continue this program”, Young said, “I have decided that the best course of action is to provide the Army with an opportunity to define a coherent, disciplined Kiowa Warrior helicopter replacement program, and to obtain more rigorous contract terms for its development.” Secretary of the Army Pete Geren stated, “The cost and schedule that were the focus of the decision to award the contract to Bell Helicopter are no longer valid. We have a duty to the Army and the taxpayer to move ahead with an alternative course of action to meet this critical capability for our Soldiers at the best price and as soon as possible.”
Posted by Defense-Technology News at 10/17/2008 02:33:00 PM No comments: