Northrop Grumman Systems Corp., Bethpage, N.Y., is being awarded a $19,578,801 firm-fixed-price delivery order against a previously issued basic order agreement (N00019-10-G-0004) to provide integrated logistics support for low rate initial production E-2D aircraft. These efforts will support the transition to an anticipated post-material support date performance based logistics solution. Work will be performed in Bethpage, N.Y., and is expected to be completed in October 2011. Contract funds will not expire at the end of the current fiscal year. The Naval Air Systems Command, Patuxent River, Md., is the contracting activity.

Gilbane Building Company, Providence, R.I., was awarded on Dec. 3, 2010 a $17,693,889 firm-fixed-price contract. This contract is for the design/build construction associated with specialty clinic and mental health additions, and electrical deficiencies upgrade at the VA Medical Center in Providence, R.I. Work is to be performed in Providence, R.I., with an estimated completion date of Feb. 08, 2012. Bids were solicited on the World Wide Web with 18 bids received. Department of the Army, Corps of Engineers, New England District, Concord, Mass., is the contracting activity (W912WJ-11-C-0005).

GM GDLS Defense Group, LLC., Sterling Heights, Mich., was awarded on Dec. 2, 2010 a $11,704,558 cost-plus-fixed-fee contract. This contract action is to acquire the production cut-in non-recurring effort for the 570 amp alternator and mobile gun system air conditioning of Stryker vehicles. Work is to be performed in Sterling Heights, Mich., with an estimated completion date of Feb. 28, 2011. One bid was solicited with one bid received. TACOM, CCTA-AIP, Warren, Mich., is the contracting activity (W56HZV-07-D-M112).

Armacel Armor Corp., Camarillo, Calif., was awarded on Dec. 2, 2010 an $8,685,000 firm-fixed-price contract. This order is for small arms protective inserts for Foreign Military Sales for Afghanistan. Work is to be performed in Camarillo, Calif., with an estimated completion date of May 28, 2011. Bids were solicited via e-mail with four bids received. U.S. Army Research, Development and Engineering Command Contracting Center, CCRD-AP-BD, Aberdeen Proving Ground, Md., is the contracting activity (W91CRB-08-D-0060).

American Engineering & Manufacturing, Amherst, Ohio, was awarded on Dec. 2, 2010 a $6,610,839 cost-plus-fixed-fee contract. The overall objective of this project is to integrate the atomized magnesium powder production at a beryllium factory using similarly engineered equipment to reduce the cost of production of atomized magnesium to the government. Work is to be performed in Picatinny Arsenal, N.J., (27 percent) and Elmore, Ohio, (73 percent) with an estimated completion date of May 2, 2014. Bids were solicited via Broad Agency Announcement with seven bids received. Army Contracting Command, Joint Munitions and Lethality Contracting Center, Picatinny Arsenal, N.J., is the contracting activity (W15QKN-11-C-0029).

Frontier Systems, Inc., Irvine, Calif., is being awarded a $12,800,000 (NTE) cost plus fixed-fee contract modification (HR0011-07-C-0100). This modification provides for the development of necessary planning, payload integrations, and air vehicle improvements in support of an operational demonstration to further evaluate the military utility of the A160T integrated with a modified ARGUS-IS pod which includes carrying both the ARGUS-IS and SIGINT payloads. Work will be performed in Irvine, CA (100%). The work is expected to be completed by May 31, 2011. The Defense Advanced Research Projects Agency is the contracting activity.

Source: DTN News - - This article compiled by Roger Smith from reliable sources Boeing
(NSI News Source Info) DAEGU AIR BASE, Republic of Korea, - December 7, 2010: Boeing [NYSE: BA] on Nov. 8 delivered three F-15K Slam Eagles to the Republic of Korea Air Force (ROKAF) at Daegu Air Base. The company delivered the first three of 21 F-15Ks it is producing under the Next Fighter II contract to the ROKAF in September. The remaining 15 aircraft will be delivered through March 2012. 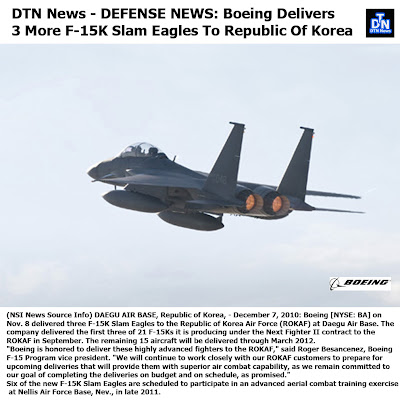 "Boeing is honored to deliver these highly advanced fighters to the ROKAF," said Roger Besancenez, Boeing F-15 Program vice president. "We will continue to work closely with our ROKAF customers to prepare for upcoming deliveries that will provide them with superior air combat capability, as we remain committed to our goal of completing the deliveries on budget and on schedule, as promised."

Six of the new F-15K Slam Eagles are scheduled to participate in an advanced aerial combat training exercise at Nellis Air Force Base, Nev., in late 2011.

The F-15K is an advanced variant of the combat-proven F-15E. Equipped with the latest technological upgrades, it is extremely capable, survivable and maintainable. The aircraft's service life is planned through 2040, with technology insertions and upgrades throughout its life cycle. Boeing completed delivery of 40 Next Fighter I F-15K aircraft to the ROKAF in October 2008.

Source: DTN News - - This article compiled by Roger Smith from reliable sources Boeing
(NSI News Source Info) WICHITA, Kan., - December 7, 2010: The Boeing [NYSE: BA] P-8I team began fabricating the first part for the Indian navy's first long-range maritime reconnaissance and anti-submarine warfare aircraft on Dec. 6 in Wichita. The P-8I, based on the Boeing Next-Generation 737 commercial airplane, is a variant of the P-8A Poseidon that Boeing is developing for the U.S. Navy. 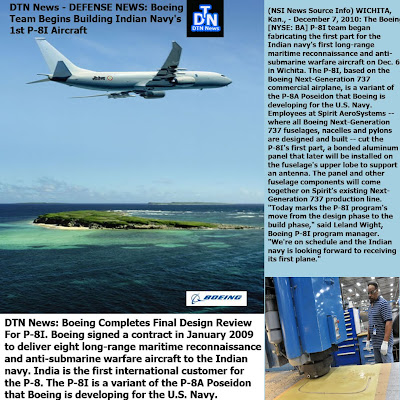 Employees at Spirit AeroSystems -- where all Boeing Next-Generation 737 fuselages, nacelles and pylons are designed and built -- cut the P-8I's first part, a bonded aluminum panel that later will be installed on the fuselage's upper lobe to support an antenna. The panel and other fuselage components will come together on Spirit's existing Next-Generation 737 production line.

"Today marks the P-8I program's move from the design phase to the build phase," said Leland Wight, Boeing P-8I program manager. "We're on schedule and the Indian navy is looking forward to receiving its first plane." Spirit will ship the P-8I fuselage to a Boeing Commercial Airplanes facility in Renton, Wash., in mid-2011 for final assembly. After that, Boeing Defense, Space & Security employees will install mission systems and complete testing prior to delivery to India.

"P-8I fuselage sections are designed and built using the same processes we use on the commercial 737," said Mike King, Spirit AeroSystems Fuselage Segment senior vice president/general manager. "We've built seven P-8A fuselages to date and continue to increase efficiency as we move forward." Boeing will deliver the first of eight P-8I aircraft to India within 48 months of the original contract signing, which took place in January 2009. India is the first international customer for the P-8.

The P-8I will provide India with speed, reliability, persistence and room for growth to satisfy the country's maritime reconnaissance and anti-submarine warfare requirements now and well into the future. The aircraft features open system architecture, advanced sensor and display technologies, and a worldwide base of suppliers, parts and support equipment.

Boeing, the world's leading aerospace company and the largest manufacturer of commercial jetliners and military aircraft combined, has significantly expanded its footprint in India both in the civil aviation and defense market. Boeing is partnering with India’s leading technology and manufacturing companies to build a supply chain out of India. The company also has opened a Research and Technology center in Bengaluru to collaborate with India's technical talent for research in aero structures, materials and network systems. Boeing India’s corporate office is located in New Delhi. For more information on Boeing India, visit www.boeing.co.in.