BAE Systems, York, Pa., was awarded on Nov. 5 a $250,128,753 cost reimbursement - no fee contract. This requirement will procure Operation Desert Storm Situational Awareness (ODS-SA) long lead material for a total of 247 ODS-SA conversion kits; 202 will be used under the contract to convert vehicles from ODS to ODS-SA configurations in support of the Bradley fighting vehicle. Work is to be performed in York, Pa., with an estimated completion date of Feb. 28, 2012. One bid was solicited with one bid received. U.S. Army, TACOM Contracting Center, Warren, Mich., is the contracting activity (W56HZV-10-G-0003).

Northrop Grumman Mission Systems Corp., Herndon, Va., was awarded on Nov. 5 a $75,689,357 cost-plus-fixed-fee contract. This contract is to provide for counter -rocket artillery and mortar protection of forward operating bases in Iraq and Afghanistan. Work is to be performed in Bagram, Afghanistan (40 percent); Baghdad, Iraq (40 percent); and Huntsville, Ala. (20 percent), with an estimated completion date of May 5, 2011. One bid was solicited with one bid received. U.S. Army Aviation and Missile Command (AMCOM), Contracting Center, Redstone Arsenal, Ala., is the contracting activity (W31P4Q11-C0088).

Boro Developers, Inc., dba Boro Construction, King of Prussia, Pa., was awarded on Nov. 5 a $14,070,917 firm-fixed-price contract for the construction of an Armed Forces Reserve Center, Camden, N.J. Work is to be performed in Camden, N.J., with an estimated completion date of May 24, 2012. Bids were solicited on the World Wide Web with non bids received. Corps of Engineers, Louisville District, Louisville, Ky., is the contracting activity (W912QR-11-C-0002).

F. Miller Construction, LLC, Lake Charles, La., was awarded on Nov. 5 a $11,389,058 firm-fixed-price contract. The work consists of constructing a continuous line of hurricane flood protection across the discharge basin at Belle Chasse No.2 Pumping Station on the east side of the Algiers Canal. This protection will incorporate pile founded reinforced concrete T-wall monoliths. New butterfly gates will be required within the steel discharge tubes. Gate operation will be by individual electric actuators utilizing local and remote control. Site work will include modifications to existing pumping station utilities, dewatering systems, construction of temporary retaining structures with work platforms, miscellaneous excavation and demolition, clearing and grubbing. Miscellaneous mechanical and electrical work will also be performed. Work is to be performed in Plaquemines Parish, La., with an estimated completion date of Jan. 23, 2012. Bids were solicited on the World Wide Web with 10 bids received. U.S. Army Corps of Engineers, New Orleans District, New Orleans, La., is the contracting activity (W912P8-11-C-0006).

Great Lakes Dredge & Dock Co., Oak Brook, Ill., was awarded on Nov. 5 a $9,060,000 firm-fixed-price contract for the beach fill, removing and placing sand. Work is to be performed on Cape May, N.J., with an estimated completion date of Mar. 1, 2011. Seventeen bids were solicited with two bids received. U.S. Army Corps of Engineers, Philadelphia, Pa., is the contracting activity (W912BU-11-C-0003).

Jacobs Technologies, Inc., Tampa, Fla., is being awarded a $139,000,000 firm-fixed-price and cost-plus-incentive-fee contract for information technology service management (ITSM) in support of U.S. Special Operations Command. Under the ITSM contract, the contractor will provide information technology (IT) support services to assist USSOCOM’s IT management office with the management of the enterprise networks, data management, distributed computing, specialty services, application management, communications, evolutionary technology insertion and other aspects of the USSOCOM information enterprise. The work will be performed primarily at MacDill Air Force Base, Fla., with limited performance in multiple stateside and overseas locations . The anticipated total contract period of performance is six-and-a-half years. The contract number is H92222-11-D-0001.

Wegmann USA, Orlando, Fla., is being awarded a $15,934,220 firm-fixed-price contract for the combat vehicle training system. Work will be performed in Orlando, Fla., and is expected to be complete Oct. 31, 2012. Contract funds in the amount of $15,934,220 will expire at the end of the current fiscal year. This effort was competitively procured using full and open competition procurement, with three offers received. The Marine Corps Systems Command, Quantico, Va., is the contracting activity (M67854-11-C-8002).

Electric Boat Corp., Groton, Conn., is being awarded a $7,300,000 modification to a previously awarded contract (N00024-11-C-2111) for long lead time material procurement and machining of low sound sensitive rotors for Ohio Class submarine propulsion systems. Work will be performed in Cheswick, Pa., and is expected to be completed by August 2012. Contract funds will not expire at the end of the current fiscal year. The Supervisor of Shipbuilding Conversion and Repair, Groton, Conn., is the contracting activity.

A "deeply moved" Barack Obama dodged volcanic ash and made a whirlwind return to his boyhood home of Indonesia on Tuesday, saying he would never have believed he could come back as US president.

Obama marvelled at the transformation of the sleepy city of Jakarta he once knew into a bustling metropolis and noted the country's parallel evolution from authoritarianism to democracy and a burgeoning alliance with Washington.

"It's wonderful to be here although I have to tell you that when you visit a place that you spent time in as a child, as the president it's a little disorientating," he told reporters.

"The landscape has changed completely, when I first came here it was in 1967 and people were on becaks ... a bicycle rickshaw thing."

Obama raced into Indonesia ahead of a cloud of volcanic ash spewing from Mount Merapi in central Java which has played havoc with commercial aviation traffic in recent days.

But he was forced to cut back his twice-postponed homecoming and will leave nearly two hours ahead of schedule on Wednesday, amid concerns that Air Force One would otherwise be grounded by the plume of ash.

Source: DTN News - - by K. V. Seth - Special Report & compiled by Roger Smith from reliable sources
(NSI News Source Info) HONG KONG - November 10, 2010: From the most Muslim nation on earth, President Barack Obama is reaching out to the Islamic world, declaring that efforts to build trust and peace are showing promise but are still clearly "incomplete." 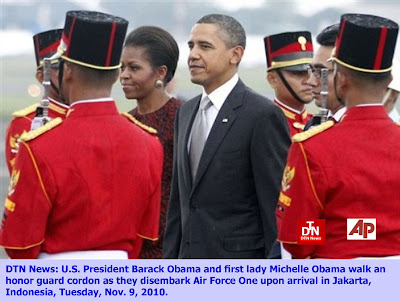 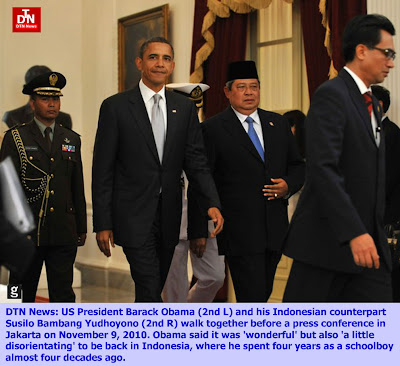 Obama on Wednesday will deliver one of the most personal and potentially consequential speeches of his presidency, reflecting on his own years of upbringing in Indonesia and giving an update on America's "new beginning" with Muslims that he promised last year in Cairo.

At the same time, the path to lasting peace in the Middle East was hardly looking smoother. A reminder of that difficult road was waiting for Obama when he landed here Tuesday on a steamy afternoon in southeast Asia. Israel's decision to build more apartments in east Jerusalem, a disputed territory claimed by Palestinians, had already earned a rebuke from American diplomats before a tired, traveling president weighed in himself.

"This kind of activity is never helpful when it come to peace negotiations," Obama said when questioned at a news conference alongside Indonesia's president, Suslilo Bambang Yudhoyono. "I'm concerned that we're not seeing each side make the extra effort involved to get a breakthrough. ... Each of these incremental steps can end up breaking down trust."

Heavily invested and eager for Mideast stability, Obama insisted: "We're going to keep on working on it."

Obama's criticism came during a cherished, fleeting and twice-delayed homecoming in Indonesia. He canceled plans to come earlier this year because of domestic troubles, and now he's dodging a big cloud of volcanic ash.

India's most volatile volcano, Mount Merapi, has erupted with deadly force for days. The White House determined Air Force One could fly in as scheduled to Jakarta but that Obama should shorten his stay given the flow of airborne ash. That meant Obama would be in Indonesia for just 19 hours, still long enough to visit a famous mosque and deliver his speech.

The president, who is Christian, is eager to hold up Indonesia as a model: an overwhelmingly Muslim nation where other religions are respected freely and an evolving democracy is gaining strength despite a legacy of corruption.

He will revisit themes of his famous 2009 Cairo speech, one in which he called for mutual respect: from the United States for Muslims in a post-Sept. 11 world, and also from Muslims for the United States for its diversity and compassion. That speech also essentially set up an Obama scorecard on Iraq, Iran and efforts to combat Islamic extremists.

Obama is also giving substantial attention to the new partnerships his government has reached with Indonesia's. And he is talking freely about his time here, from age 6 to 10, when he was running around as a boy named Barry.

The personal touches began coming out as Obama, looking weary on his fourth day in Asia, reflected Tuesday on how Jakarta has changed since he lived here. His only real look came during a couple of motorcade rides.

"I feel great affection for the people here," Obama said. "And obviously I have a sister who's half Indonesian. My mother lived and worked here for a long time. And so the sights and the sounds and the memories all feel very familiar."

The president drew smiles from the gathered dignitaries by speaking a little Indonesian at times.

"We have been waiting for so long," said Yudhoyono to Obama at a press event shoved inside by rain.

The two presidents touted a deal that will have both countries cooperating on energy, education, the environment and many other subjects. More broadly, Indonesia offers the United States one more strategic, democratic voice in a continent of emerging powers and lucrative markets, while U.S. support can help Indonesia's own economy and regional security.

Both leaders pushed back on the thesis that Obama's efforts aim, at least in part, to counter China's rise. Obama insisted he wanted China to grow and prosper, and he said that "we're not interested in containing that process." Yudhoyono said he didn't think of one power counterbalancing another, but he added that there must be an "equilibrium" in the region.

Obama also pointedly noted that the global economy is out of whack, saying, "We have seen some countries run up very big surpluses and intervening significantly in the currency markets to maintain their advantage." The U.S. contends China's undervalued currency gives Beijing an unfair trade boost in the selling of its goods.

The president's stop in Indonesia came after he spent three days in India — the most attention any foreign country has received from him. Obama leaves Wednesday night for global economic meetings in South Korea, and then more in Japan.

Overall, he said progress has been mixed.

"Or efforts have been earnest, sustained," he said. "We don't expect that we are going to completely eliminate some of the misunderstandings and mistrust that have developed ... but we do think that we're on the right path."

Indonesians all over this country of more than 17,000 islands gathered around television sets in their houses, coffee shops and office buildings as Obama's plane touched down. He was to deliver his speech at the University of Indonesia to an indoor crowd of about 6,000 people. An outdoor event was ruled out by concern over weather and the expected overwhelming crowd.

A fire on a cruise ship has left 4,500 stranded off the coast of Mexico.
»See more articles