Source: DTN News - - This article compiled by K. V. Seth from reliable sources Tim Kelly - Reuters
(NSI News Source Info) KOTTAKKAL, Kerala, India - November 5, 2013: Japan is considering providing low-interest loans from a state-run bank to support exports of aircraft designed for military use, the first time such sales are being considered since the end of World War Two, according to officials with knowledge of the still-developing policy. 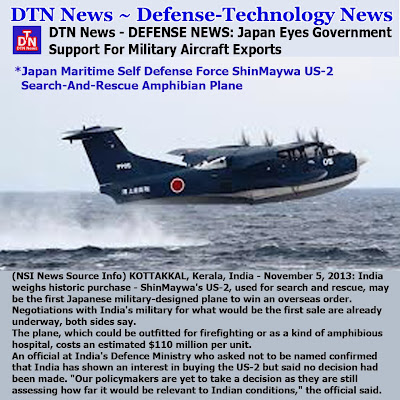 The step would mark an extension of Prime Minister Shinzo Abe's efforts to bolster the self-reliance of Japan's military and could open an overseas market worth tens of billions of dollars in coming years for the country's defence contractors.

It would also mark a sharp reversal of the near-total ban on exports of military equipment, a development that could strain ties with China as a more assertive Japan seeks a market for military technology in Asia and beyond.

Japan's post-war constitution, written by the U.S.-led occupation forces, renounced war and a standing army. Major military equipment makers moved into other fields and the current ban did not formally take effect until the fast-growth era of the 1960s and the evolution of Japan's Self Defense Forces put the issue on the agenda.

Two of the initial test cases for Japan's policy shift are likely to be the C-2 military transporter, built by Kawasaki Heavy Industries and ShinMaywa Industries' US-2 amphibious plane, according to three officials involved.

Both companies are looking to export civilian versions of the aircraft, which would allow them to avoid the ban. Both companies have also made inquiries about the Abe government's willingness to provide financing to help close sales against established aircraft makers.

In one partial precedent, Japan has extended overseas development assistance (ODA) to the Philippines and Indonesia to help those governments buy Japanese-built ships for coastal patrols.

Japan's government approved the aid after winning assurances that the boats would be used only to counter piracy and terrorism and after winning an endorsement from the United States, Japan's main ally.

A more likely option for aircraft exports, according to the three officials involved in the discussions, would be low-interest loans from the Japan Bank for International Cooperation (JBIC), a state-operated lender headed by former Toyota Motor Corp chief Hiroshi Okuda, to the buyers.

The bank is funded largely by borrowing from the nation's Foreign Exchange Fund Special Account, the pool of money available for intervention in currency markets.

A spokesman for JBIC said the bank does not discuss any loan applications as a matter of policy.

Masanobu Oogaki, a project manager at Kawasaki's aerospace division helping oversee the C-2 project, said officials led by the Ministry of Economy Trade and Industry had discussed seeking JBIC loans for the military transporter once the company had a potential overseas buyer.

JBIC typically charges interest of just over 1 percent on a loan of less than five years. The bank has recently been recruited to help Japanese companies win contracts for big infrastructure projects. Most of its lending is linked to securing overseas oil and gas reserves for Japan.

INDIA WEIGHS HISTORIC PURCHASE
ShinMaywa's US-2, used for search and rescue, may be the first Japanese military-designed plane to win an overseas order. Negotiations with India's military for what would be the first sale are already underway, both sides say.

The plane, which could be outfitted for firefighting or as a kind of amphibious hospital, costs an estimated $110 million per unit.

An official at India's Defence Ministry who asked not to be named confirmed that India has shown an interest in buying the US-2 but said no decision had been made.

"Our policymakers are yet to take a decision as they are still assessing how far it would be relevant to Indian conditions," the official said.

ShinMaywa, which sees Canada's Bombardier Inc. as its main competitor, estimates that there could be a global market of about 100 amphibious planes for which it could compete.

Kawasaki's Oogaki, said his company believes it can compete for as many as 300 orders over the next decade or so with potential customers in Asia, the Middle East and Africa.

The chief competitor to Kawasaki's twin turbofan C-2 is the A400M military transport built by Europe's Airbus. Similar in size and capability, the Airbus cargo plane has racked up 170 orders in Europe at a price tag starting at around $160 million.

So far, Japan's defense ministry has ordered three C-2s at just over $200 million each in the most recent budget.

By opening export markets for military equipment makers, the per unit cost of such equipment could fall because of the volume of production, making it cheaper for Japan's own military as well, a security panel that drafted recommendations for Abe said last month.

The C-2 represents a major upgrade in the ability of Japan's military to shift equipment and troops to far-flung locations.

Compared to its predecessor, the C-1, which is currently in service, the new plane can lift nearly four times as much cargo - enough to carry a mid-size helicopter, as depicted in sales brochures drawn up by Kawasaki.

While the C-1 struggles to reach Japan's outlying islands, the C-2 could carry a load from Tokyo to Kabul, for example. 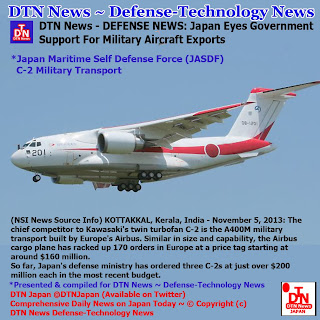 Abe plans to release a review of Japan's military policy by the end of the year that is expected to include a commitment to open up military exports and arms development programs.

Mitsubishi Heavy is currently in talks over joining the Lockheed Martin Corp led F-35 fighter jet programme as a supplier after Japan placed an order for the aircraft.

In the meantime, Kawasaki, a major wartime maker of fighters and bombers that has became better known for its motorcycles in recent decades, plans to have the C-2 ready for service with Japan's military by 2015.

The company has a team of around 10 people marketing the C-2, which will be sold as the YCX overseas, Oogaki said.

Investors have anticipated a boon to heavy equipment makers from a pivot in security policy under Abe and the sector has outperformed in a rising market. Shares of Kawasaki are up 122 percent over the past year, while ShinMaywa is up 78 percent. Mitsubishi Heavy has gained 90 percent. Over the same period, the benchmark Topix index has gained 58 percent. 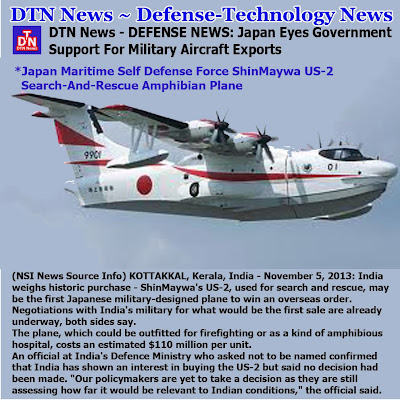