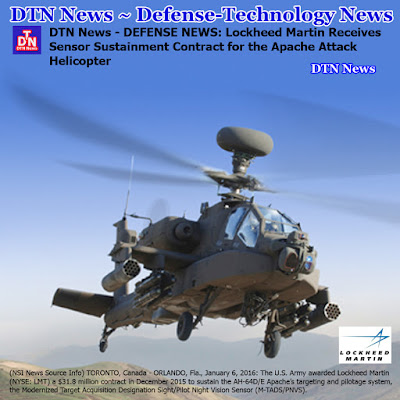 This Performance-Based Logistics (PBL) contract enables M-TADS/PNVS mission readiness, drives reliability and maintainability improvements, and reduces operation and support costs. A total of $31.8 million was obligated to Lockheed Martin through this one-year base contract award with a total value not to exceed $85.5 million. The period of performance is through December 2016, with four additional one-year options that would extend support through December 2020. The total five-year contract value potential is $424 million.

“We work hard to ensure that our PBL customers have the highest availability rates possible, and we back that up with a team of field representatives who stay ready around the clock, around the world,” said Mike Taylor, director of M-TADS/PNVS international and sustainment programs at Lockheed Martin Missiles and Fire Control.

Fielded in 2005, M-TADS/PNVS provides Apache pilots with long-range, precision engagement and pilotage capabilities for safe flight during day, night and adverse weather missions. Lockheed Martin has delivered more than 1,350 M-TADS/PNVS systems and spares to the U.S. Army and international customers.

For additional information, visit our website: www.lockheedmartin.com/mtads.
About Lockheed Martin
Headquartered in Bethesda, Maryland, Lockheed Martin is a global security and aerospace company that – with the addition of Sikorsky – employs approximately 126,000 people worldwide and is principally engaged in the research, design, development, manufacture, integration and sustainment of advanced technology systems, products and services.
Media Contact

AM General, South Bend, Indiana, was awarded a $24,965,954 modification (P00012) to foreign military sales (Iraq) contract W56HZV-15-C-0155 for 120 High Mobility Multipurpose Wheeled Vehicles.  Work will be performed in Mishawaka, Indiana, with an estimated completion date of April 30, 2016.  Fiscal 2016 other procurement funds in the amount of $24,965,954 were obligated at the time of the award.  Army Contracting Command, Warren, Michigan, is the contracting activity.

RCT Systems Inc., Power Systems Division,* Linthicum, Maryland, is being awarded a $12,393,192 cost-plus-fixed-fee contract for research and development activities associated with power conversion modules and energy storage components associated with advanced shipboard electrical power systems.  RCT Systems Inc. will support the research and developmental testing and manufacturing of bi-directional power conversion modules to support a 4160 VAC 60Hz shipboard electrical architectures to interface with the battery or rotating machine energy storage and power load modules in support of next generation integrated power systems. RCT Systems will also perform studies and analysis, conduct design, develop, and testing of solutions for the energy storage and for the power conversion modules.  Work will be performed in Linthicum, Maryland, and is expected to be completed by January 2021.  Fiscal 2015 research, development, test, and evaluation (Navy) funding in the amount of $50,000 will be obligated at the time of award and funds will expire at the end of the current fiscal year.  This contract was competitively procured via broad agency announcement; 99 white papers were received and 13 proposals were requested.  The Naval Sea Systems Command, Washington, District of Columbia, is the contracting activity (N00024-16-C-4200). 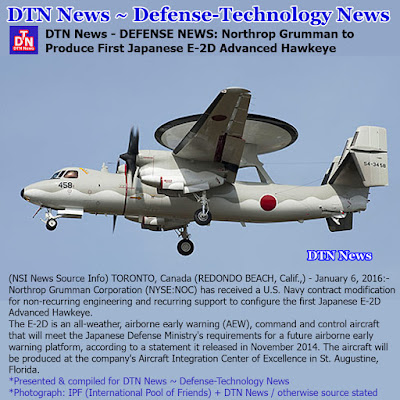 The E-2D is an all-weather, airborne early warning (AEW), command and control aircraft that will meet the Japanese Defense Ministry's requirements for a future airborne early warning platform, according to a statement it released in November 2014. The aircraft will be produced at the company's Aircraft Integration Center of Excellence in St. Augustine, Florida.

Under the $285,975,244 contract modification, Northrop Grumman will configure the Japanese E-2D aircraft utilizing the same E-2D multiyear production line used for U.S. aircraft to allow for a more efficient and affordable delivery schedule. The E-2D is the world's only in-production AEW aircraft.

In November 2014, the Japan Ministry of Defense competitively selected the E-2D to fulfill an emerging next-generation AEW requirement.

"The E-2D will provide a critical capability that will serve as a force multiplier for the Japanese government," said Jane Bishop, vice president, E-2D Advanced Hawkeye and C-2 Greyhound programs, Northrop Grumman. "First responders will be able to receive and act on information more quickly than before with greater airborne early warning capability and a networked communications system."

The Japanese Air Self Defense Force has operated the E-2C Hawkeye since the late 1980s. The E-2C is also currently in use by Taiwan, France and Egypt.