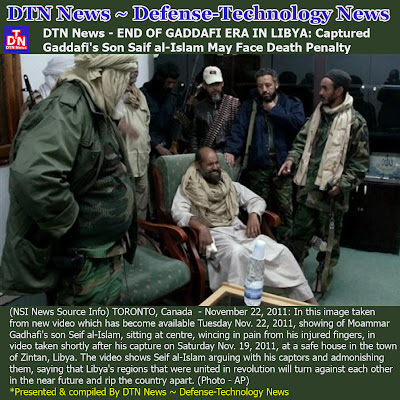 The minister said that among other crimes, Saif "has instigated others to kill, has misused public funds, threatened and instigated and even took part in recruiting and bringing in mercenaries.”
"This is just a small account of the crimes that the Libyan Prosecutor General is going to bring against him,"al-Alagy added, assuring that Libya “is ready to prosecute Saif al-Islam."
"We have adopted enough legal and judicial procedures to ensure a fair trial for him," the minister concluded.
Libya's prime minister has insisted that the fugitive son of the late Libyan leader will face a fair trial. He promised "justice and transparency" in handling the case.
An NTC commander said Saif was arrested 30 miles west of the town of Ubari along with two of his aides. Mohammed al-Alagy said Saif al-Islam was captured while traveling in a convoy and was taken to the Western mountain town of Zintan, which is under the control of a powerful faction of armed groups known as the Zintan brigades.
Their spokesman, Bashir al-Tlayeb, claimed Saif had been captured while attempting to flee to Niger.
Niger’s President Mahamadou Issoufou did confirm last Saturday that his country would grant asylum to Saif should he request it.
The National Transitional Council (NTC) has released a photo they claim was taken after the Saif al-Islam was captured. He appears to have received injuries to his hand in the firefight that ensued when fighters maneuvered to detain him.
And while for the time being Gaddafi’s son has avoided the fate of his father, who was killed shortly after being capture, Saif’s fate may still be no less brutal.
Saif, who was long expected to succeed Muammar Gaddafi and vowed to fight on after his death in Sirte, is wanted by the International Criminal Court for crimes against the Libyan people.
The ICC issued a warrant for him on June 27 over charges of crimes against humanity in crushing anti-regime protests – the charges that Saif vehemently denies.
That is how Saif al-Islam viewed the charges against him in his interview to RT in July:
“They do not accuse me of policy, they accuse me of killing people, and everybody knows it. For me to be responsible for killing people was a joke. This would have happened anywhere in the world if people in the street moved towards a military site trying to steal ammunition or arms. Of course the military would prevent them!” stated Saif al-Islam Gaddafi.
Al-Alagy says Saif al-Islam will be transported to Tripoli soon. It remains to be seen if the NTC will comply with UN Resolution 1970 and finally hand Saif over to the Hague tribunal.
While ICC proescutor Luis Moreno Ocampo will travel to Libya for talks regarding where Saif will ultimately be tried, a spokesman for the court had previosuly stressed that Libya had an obligation under international law to cooperate with the court and ensure that Saif’s rights be respected.
And while Libyan authorities claim justice will be rendered fairly, Dr. Tawfik Shomar, a philosophy professor at Philadelphia University in Jordan, said Saif will not stand a fair trial in Libya. Dr. Shomar went on to tell RT that even with the capture of the last remaining member of the Gaddafi family who had been at large, stability is unlikely to return to the country.
“I don’t think that people who are opposing the new regime in Libya will put down their weapons, I think that the circle will continue on, if not for months, then years to come.”
Really arrested this time?
This is not the first time reports regarding Saif’s capture have circulated in Libya. As rebel forces drove into the heart of Tripoli on August 22, fighters claimed Saif had been detained. That report, which was confirmed by the International Criminal Court (ICC), would later be proven false, as Saif met with journalists the following day.
And as the siege of Sirte was coming to an end on October 20, it was widely reported that Saif had either been killed or captured. Despite those rumors, it was later determined he had successfully managed to flee the city.
Likewise, Saif’s younger brother Khamis was also subject to numerous reports regarding his death that later proved to be unfounded. Khamis was first said to have been killed during a bombing raid on his family’s Bab Al Aziziya Compound in Tripoli on March 20. Al Arabiya confirmed the report, citing unnamed sources. After that report was disproven, a rebel spokesman then falsely claimed that Khamis died during an August 5 airstrike.
However, he was really killed when a NATO helicopter destroyed a convoy he was traveling in on August 29, as pro-Gaddafi forces would later confirm.
Related Images & News; 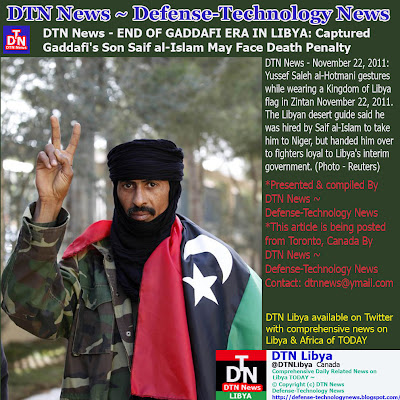 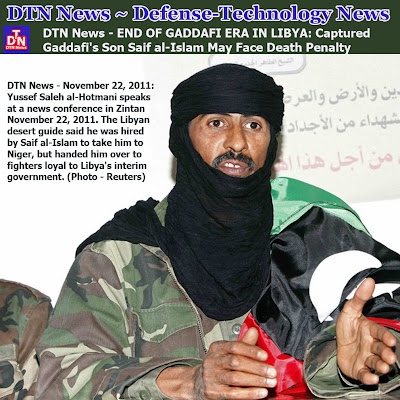 Gaddafi’s son: Caught between a legal fight and flight

Col Gaddafi’s son Saif al-Islam says he is innocent and is reportedly considering appearing before the war crimes tribunal. The chief ICC prosecutor has warned him not to try to flee from his refuge in the Sahara desert.

Col. Gaddafi is dead and details of his murky deals with Western leaders have been buried with him. But Gaddafi’s son is safe and reportedly ready to surrender to the International Criminal Court, where he may spill secrets of his father’s regime.

Gaddafis have 'slim to no chance' of Hague justice

The International Criminal Court is due to receive a suit against NATO over the killing of Libyan ex-leader Muammar Gaddafi. But the Gaddafi family’s chances of finding justice in The Hague are all too slim, says journalist James Corbett.

Saif al-Islam was once heralded as Libya’s knight in shining armor. Now the liberal-minded philanthropist and jet- set socialite has found himself in the unlikely position of carrying the flag of resistance for his slain father Muammar Gaddafi.

Scattered seed: Where are Gaddafi's children?

As news of Gaddafi’s death spreads around the world, the attention shifts to his equally elusive children. With the rumor mill more active than ever, at least one of his sons has been reported dead. But what about the rest of his clan?