Lockheed Martin, Syracuse, N.Y., is being awarded a $48,443,311 modification to previously awarded contract (N00024-07-C-5201) for exercise of fiscal year 2011 options for the Navy’s AN/SQQ-89A(V)15 undersea warfare system. The AN/SQQ-89A(V)15 is a surface ship combat system with the capabilities to search, detect, classify, localize and track undersea contacts; and to engage and evade submarines, mine-like small objects, and torpedo threats. Work will be performed in Lemont Furnace, Pa. (50 percent), Syracuse, N.Y. (25 percent), Eagan, Minn. (25 percent), and is expected to be completed by May 2013. Contract funds will not expire at the end of the current fiscal year. The Naval Sea Systems Command, Washington, D.C., is the contracting activity.

Lockheed Martin Services, Inc., Gaithersburg, Md., is being awarded a $36,000,000 modification to a previously awarded indefinite-delivery/ indefinite-quantity, cost-plus-incentive-fee, performance-based contract (N65236-05-D-8836) for services for the operation of the Naval Array Technical Support Center to include production, repair, refurbishment, installation and testing of towed array sonar systems. The cumulative value of this contract, including this modification is $152,540,060. The work for this contract will be performed at Little Creek, Va., (75 percent for fiscal 2011) with the transition of work, in accordance with BRAC 2005, to Newport, R.I., (25 percent for fiscal 2011, 100 percent for fiscal 2012), and is expected to be completed by March 2012. Contract funds will not expire at the end of the fiscal year. This contract was competitively procured by full and open competition via the Space and Naval Warfare Systems Center e-Commerce central website and the Federal Business Opportunities web site, with two offers received. The Space and Naval Warfare Systems Center Atlantic, Charleston, S.C., is the contracting activity.

Far Western Anthropological Research Group, Inc., Davis, Calif. (N62473-11-D-2220) ;HDR Environmental, Operations and Construction, Inc., Englewood, Colo. (N62473-11-D-2221);ASM Affiliates, Inc.*, Carlsbad, Calif. (N62473-11-D-2222); and SWCA, Inc., South Pasadena, Calif. (N62473-11-D-2223),are each being awarded a firm-fixed-price, indefinite-delivery/indefinite-quantity multiple award contract for cultural resources-related services at various locations within the Naval Facilities Engineering Command, Southwest area of responsibility. The maximum dollar value, including the base period and four option years, for all five contracts combined is $25,000,000. The work to be performed provides for cultural resources-related services under North American Industry Classification System (NAICS) Code 541690. The services include cultural resources-related studies, investigations, preparation of historic and archaeological documents, and implementation of plans in accordance with Sections 106 and 110 of the National Historic Preservation Act of 1966, as amended. Work under these contracts will be performed in Calif. (90 percent), Ariz. (two percent), Colo. (two percent), Nev. (two percent), N.M. (two percent), and Utah (two percent). Far Western Anthropological Research Group, Inc. is being awarded the initial task order in the amount of $55,572 for an archaeological survey and site recordation of four historic roads and trails at Naval Air Weapons Station China Lake, China Lake, Calif. Work for this task order is expected to be completed by Jan. 2012. The term of the contracts is not to exceed five years, with an expected completion date of Jan. 2016. Contract funds will not expire at the end of the current fiscal year. This contract was competitively procured via the Navy Electronic Commerce Online and Federal Business Opportunity websites, with nine proposals received. These four contractors may compete for task orders under the terms and conditions of the awarded contracts. The Naval Facilities Engineering Command, Southwest, San Diego, Calif., is the contracting activity. 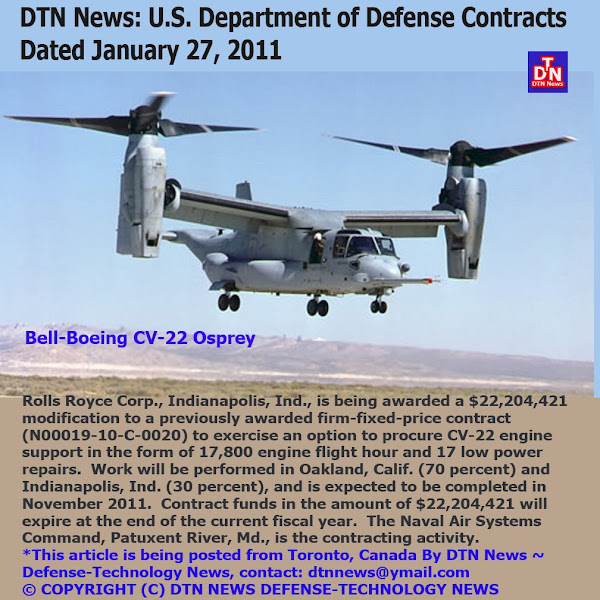 Rolls Royce Corp., Indianapolis, Ind., is being awarded a $22,204,421 modification to a previously awarded firm-fixed-price contract (N00019-10-C-0020) to exercise an option to procure CV-22 engine support in the form of 17,800 engine flight hour and 17 low power repairs. Work will be performed in Oakland, Calif. (70 percent) and Indianapolis, Ind. (30 percent), and is expected to be completed in November 2011. Contract funds in the amount of $22,204,421 will expire at the end of the current fiscal year. The Naval Air Systems Command, Patuxent River, Md., is the contracting activity.

Carleton Life Support System, Inc., Davenport, Iowa, is being awarded $9,368,204 cost-plus-fixed-fee contract for research and development efforts to produce advanced life support systems for fighter/attack and transport/patrol aircraft, as well as deployable systems to support the warfighter. Work will be performed in Davenport, Iowa, and is expected to be completed in February 2016. Contract funds will not expire at the end of the current fiscal year. This contract was competitively procured via a broad agency announcement; one offer was received. The Naval Air Warfare Center Aircraft Division, Patuxent River, Md., is the contracting activity (N00421-11-D-0032).

PerkinElmer Genetics, Inc., Bridgeville, Pa. is being awarded a maximum $9,700,000 firm fixed price, indefinite delivery and indefinite quantity, performance based contract with economic price adjustment for newborn screening services and supplies. There are no other locations of performance. Using services are Army, Navy, Air Force and Marine Corps. The original proposal was DIBBS solicited with three responses. The date of performance completion is May 6, 2012. The contracting activity is the Defense Logistics Agency Troop Support, Philadelphia, Pa. (SPM2DE-11-D-7229).

Mike Hooks, Inc., Westlake, La., was awarded an $8,850,651 firm-fixed-price contract Jan. 25, 2011. The award will provide for one fully crewed and equipped cutterhead dredge to perform maintenance at the Mississippi River Source Water Protection Area. Work will be performed in Plaquemines Parish, La., with an estimated completion date of July 19, 2011. The bid was solicited through the Internet with three bids received. The U.S. Army Corps of Engineers, New Orleans District, New Orleans, La., is the contracting activity (W912P8-11-C-0024).

Reliable Contracting Group, LLC, Louisville, Ky., was awarded an $8,434,006 firm-fixed-price contract Jan. 25, 2011. The award will provide for the construction of a new bulk fuel storage facility at Biggs Army Airfield. Work will be performed in Fort Bliss, El Paso, Texas, with an estimated completion date of Feb. 6, 2012. The bid was solicited through the Internet with six bids received. The U.S. Army Engineering District, Fort Worth, Texas, is the contracting activity (W9126G-11-C-0011).

AeroVironment, Inc., Monrovia, Calif., was awarded a $7,800,003 firm-fixed-price contract Jan. 25, 2011. The award will provide for procurement of 919 U.S. Marine Corps Rave Module 2 upgrade sets. Work will be performed in Simi Valley, Calif., with an estimated completion date of April 30, 2011. One bid was solicited with one bid received. The U.S. Army Contracting Command, AMCOM Contracting Center, Redstone Arsenal, Ala., is the contracting activity (W58RGZ-05-C-0338). 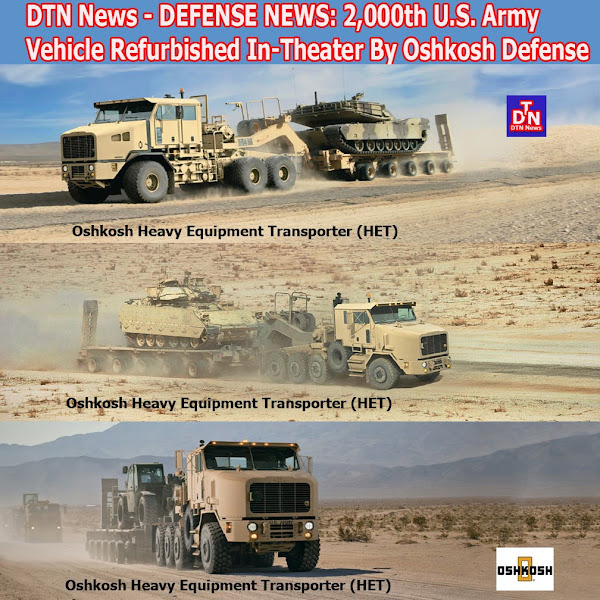 “Many of the heavy and line-haul trucks that come to this facility have seen almost a decade of rugged, in-theater use,” said Mike Ivy, vice president and general manager of Army Programs for Oshkosh Defense. “The TPER program allows us to significantly reduce the cost of refurbishing the Army’s vehicles, and cuts maintenance cycle time by at least 60 days compared to U.S.-based repairs – more quickly getting the trucks back out where they are needed. The 2,000th truck that we’re delivering to the Army today represents the success of this program and our combined commitment to supporting Soldiers as close to point of use as possible.”

Oshkosh executives and Army officials gathered at Oshkosh’s Defense Logistics Center in Kuwait to celebrate the milestone and pay tribute to Oshkosh employees, as well as the U.S. Army staff, who support the TPER program. An Oshkosh Heavy Equipment Transporter (HET), part of the Army’s Family of Heavy Tactical Vehicles (FHTV), was the 2,000th refurbished vehicle.

The TPER program restores battle-damaged and heavily worn vehicles from the Army’s FHTV and line-haul fleets to the military’s strict equipment-readiness standards so they can be returned to the field. The military departments involved in the TPER program include TACOM Life Cycle Management Command (LCMC), the Defense Logistics Agency (DLA), and the Defense Contract Management Agency (DCMA).

The DCMA and Oshkosh’s quality-assurance offices work together to ensure vehicles are restored to full mission-capable operability. The Kuwait facility sees as many as 60-65 vehicles a month that need anywhere from 300-1,000 replacement parts. To meet these requirements, Oshkosh collaborates extensively with TACOM and DLA to maintain a multifaceted supply-chain management approach.

Oshkosh Defense provides aftermarket service and support with a full life-cycle approach. The company has led customer service projects at more than 100 locations globally, including in-theater. These efforts, along with factory-trained field service representatives (FSRs) and Web-based parts support ensure customers can access service, repair and parts distribution in every corner of the globe, at any time of day. More than 700 Oshkosh service personnel are currently deployed across the U.S. and abroad, including more than 280 FSRs in Afghanistan.

About Oshkosh Defense Oshkosh Defense, a division of Oshkosh Corporation, is an industry-leading global designer and manufacturer of tactical military trucks and armored wheeled vehicles, delivering a full product line of conventional and hybrid vehicles, advanced armor options, proprietary suspensions and vehicles with payloads that can exceed 70 tons. Oshkosh Defense provides a global service and supply network including full life-cycle support and remanufacturing, and its vehicles are recognized the world over for superior performance, reliability and protection.