Source: DTN News - - This article compiled by Roger Smith from reliable sources Telegraph UK
(NSI News Source Info) TORONTO, Canada - October 7, 2012: David Cameron is on standby to try to prevent the collapse of the £28bn merger between BAE Systems and EADS following surprise German demands for the headquarters of the military and aerospace giant to be based in Munich. 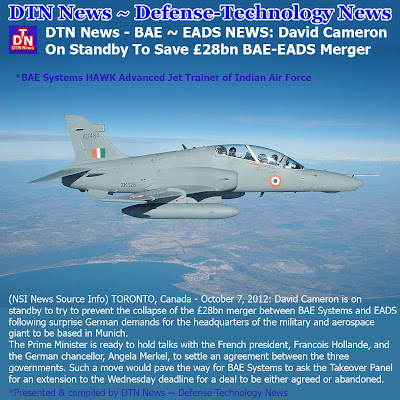 The Prime Minister is ready to hold talks with the French president, Francois Hollande, and the German chancellor, Angela Merkel, to settle an agreement between the three governments. Such a move would pave the way for BAE Systems to ask the Takeover Panel for an extension to the Wednesday deadline for a deal to be either agreed or abandoned.

The political threat to the deal is being reinforced by complaints from some BAE investors that they are being kept in the dark about the merger. A number of shareholders have expressed concerns that BAE is negotiating from a position of weakness while some EADS investors feel the terms of the deal are too generous to the British company.
Officials will today make a fresh attempt to resolve the headquarters issue in another tripartite video conference call.
An attempt on Friday to settle outstanding issues went smoothly until Lars-Hendrik Roller, Ms Merkel's chief economic adviser, stunned British and French negotiators by calling for the scrapping of plans to locate the combined company's military headquarters at Farnborough and civil aircraft headquarters at Toulouse. He called for a single base in Munich to be set up instead.
Efforts were made over the weekend to find a solution but if today's talks again end in failure BAE will ask Mr Cameron to intervene and raise the issue with his French and German counterparts, in what is being described by insiders as "make or break time".
The shock was heightened after agreement had been reached on what was seen as the more awkward issue of the size of government shareholdings in the joint venture and an unusual accord between the British and French sides.
Mr Roller and Mr Macron agreed to limit the state holding to 9pc each for France and Germany, or 18pc in total. The UK has no shareholding in either company. This agreement was reached with a view to maintaining state interest while reducing the risk of being frozen out of military orders in the important US market, where Boeing is campaigning to have BAE stripped of its privileged status.
The German official, who had to be talked down from releasing a statement claiming the deal was off, was also said to be upset by France's refusal to provide a written guarantee it would not seek to increase its 9pc shareholding.
Neither BAE nor EADS was willing to comment on the prospects of the deal surviving, either in its present form or with changes.
Governments and unions are worried about the outlook for jobs in a group that would provide employment for 220,000 people, including 50,000 in Britain.