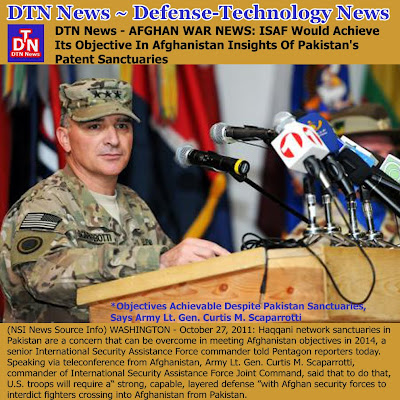 Speaking via teleconference from Afghanistan, Army Lt. Gen. Curtis M. Scaparrotti, commander of International Security Assistance Force Joint Command, said that to do that, U.S. troops will require “a strong, capable, layered defense” with Afghan security forces to interdict fighters crossing into Afghanistan from Pakistan.
The general said he and his Pakistani counterparts have been working toward a solution.
“We are obviously working with them to determine how best to have an impact inside of that sanctuary,” he said. “We work very hard on our side to affect them in terms of interdiction, their caches and the movement [across the] border.”
Scaparrotti, who regularly travels throughout Afghanistan, said he seeks to improve Afghan-Pakistani relations by helping to establish common objectives.
“My intent now -- I've been over to Pakistan -- is to improve that relationship and work together where we do have a common enemy,” he said. “It's in their interest, it's in our interest as a coalition and Afghanistan's interest to get better control of the border that Afghanistan and Pakistan share.”
Insurgents in Pakistan are a threat to Pakistan as much as they are a threat to Afghanistan or the United States, Scaparrotti said. “And those are the kinds of discussions that I have with my military counterparts,” he added.
The general noted there was frequent communication among coalition, Afghan and Pakistani forces when he was commander of ISAF’s Regional Command East.
“A year ago, it was common, and has been for some time, we would have radio communications cross-border between coalition, Afghan and Pakistan forces who face each other across the border,” he said. “We would have communications between counterparts at brigade level, counterparts at [regional command] or division level.
“We [also] had quarterly planning conferences where we would compare our planning along the border and perhaps do complementary operations,” the general added.
Scaparrotti acknowledged that communication between U.S. and Pakistani military forces was no longer “open” following the U.S. raid that killed Osama bin Laden.
“About May of this past year, after the bin Laden raid, those routine communications just were not available in most cases,” he said. “We had a difficult time arranging border flag meetings. We had a difficult time arranging communications back and forth.”
Pakistan began to show interest in renewing military-to-military communications with U.S. forces in Afghanistan since “probably about July-August,” Scaparrotti said.
“And I have made a trip there,” he added. “We're attempting to re-establish the communications along the border, particularly between units that are facing each other, Afghan and Pakistan.”
It's important, he said, “to ensure that, one, we can interdict cross-border movement, but, two, that when there is a conflict … we can react and the Pakistanis can react, without firing upon each other.”
Scaparrotti said his focus will continue to be on Afghanistan.
“I am, as an operational commander, focused on this side of the Afghan border, and [those] operations that I control here,” he said.
Scaparrotti said he’s pleased with the progress made by Afghan security forces and the momentum they have gained against the insurgents. “My objective is to maintain that momentum, accelerate the development of the [Afghan forces and] push them into the lead,” he said.
*Link for This article compiled by Roger Smith from reliable sources
By Army Sgt. 1st Class Tyrone C. Marshall Jr. American Forces Press Service - US DoD
*Speaking Image - Creation of DTN News ~ Defense Technology News
*This article is being posted from Toronto, Canada By DTN News ~ Defense-Technology News
Contact:
dtnnews@ymail.com

L-3 Communications Vertex Aerospace, L.L.C., Madison, Miss., is being awarded a $26,344,361 modification to a previously awarded firm-fixed-price contract (N00019-09-D-0007) to exercise an option for organizational, selected intermediate, and limited depot level maintenance for F-16, F-18, H-60, and E-2C aircraft operated by the adversary squadrons based at Naval Air Station, Fallon, Nev. Work will be performed in Fallon, Nev., and is expected to be completed in October 2012. Contract funds in the amount of $26,344,361 will expire at the end of the current fiscal year. The Naval Air Systems Command, Patuxent River, Md., is the contracting activity.

Sikorsky Aircraft Corp., Stratford, Conn., is being awarded a $19,453,196 modification to a previously awarded indefinite-delivery/indefinite-quantity contract (N00019-07-D-0004) to exercise an option for security, project engineering, integrated logistics support, VH training, and technical manual updates in support of the VH-60N and VH-3D presidential helicopter fleet. Work will be performed in Stratford, Conn. (88 percent), and Quantico, Va. (12 percent), and is expected to be completed in September 2012. Funds will not be obligated at time of award. Contract funds will not expire at the end of the current fiscal year. The Naval Air Systems Command, Patuxent River, Md., is the contracting activity. 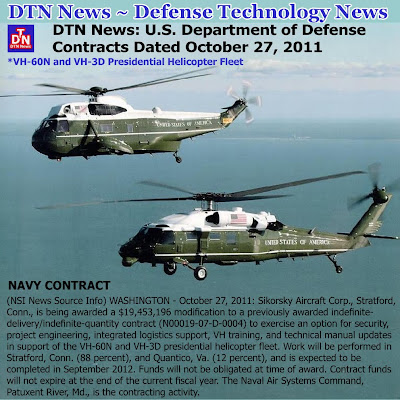 Goodrich Aircraft Wheels and Brakes, Troy, Ohio, was issued a modification on the current contract SPRHA1-09-C-0042/P00008. Award is a fixed-price with economic price adjustment contract with a maximum $14,319,535 for C-130 main wheel and brake assemblies. There are no other locations of performance. Using service is Air Force. There were four solicitations made with two responses. Type of appropriation is Improved Item Replacement Program Supply Management Activity using fiscal 2012 funds. The date of performance completion is Sept. 30, 2013. The Defense Logistics Agency Aviation Ogden, Hill Air Force Base, Utah, is the contracting activity.