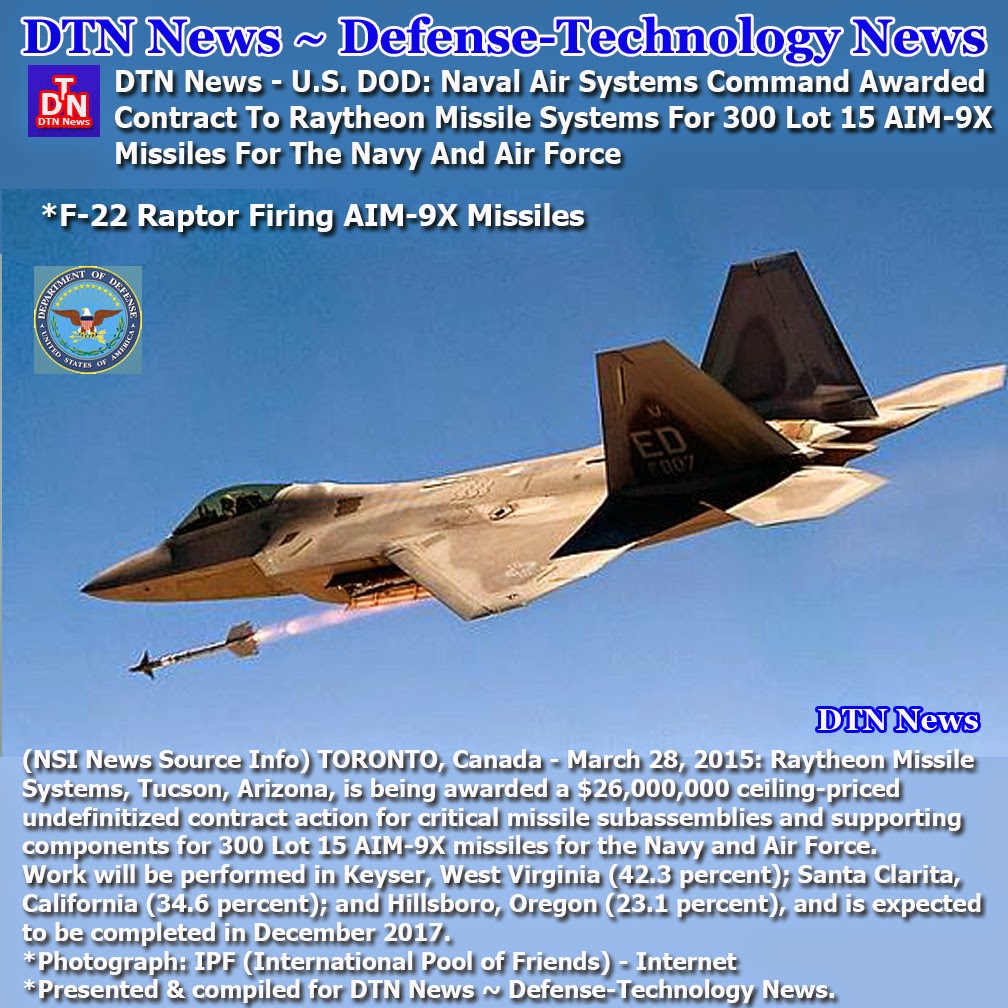 Work will be performed in Keyser, West Virginia (42.3 percent); Santa Clarita, California (34.6 percent); and Hillsboro, Oregon (23.1 percent), and is expected to be completed in December 2017.

Fiscal 2015 missile procurement (Air Force) and weapons procurement (Navy) funds in the amount of $11,404,620 are being obligated on this award, none of which will expire at the end of the current fiscal year.

AIM-9X Sidewinder Air-to-Air Missile, United States of America
The AIM-9X is the newest member in the family of AIM-9 Sidewinder short-range missiles produced by Raytheon. It is an infrared air-to-air missile primarily developed for the US Air Force and the US Navy. The AIM-9X is currently in service with over 40 countries across the world.

The US Air Force requires 5,080 Sidewinder missiles, while the US Navy plans to buy 5,000 missiles. The AIM-9X is also being supplied to Nato member countries and other US allied nations.

In July 2012, Morocco and the US exercised a letter of offer and acceptance (LOA) for AIM-9X Block II missiles.

AIM-9X Sidewinder development
The AIM-9X was developed under a joint US Navy and UASF programme.

The AIM-9X was developed under a joint US Navy and UASF programme. The AIM-9X acquisition programme is focused on fulfilling the urgent requirements of aircraft and troops by providing a next-generation Sidewinder to replace the AIM-9M missile.

The first AIM-9X missile was successfully launched in March 1999. Between 1999-2000 13 separation and control test launches and 12 guided launches were made from the US Navy's F/A-18 and USAF F-15 aircraft.

The AIM-9X Block II completed its first test firing in November 2008. Also known as AIM-9X-2, the missile is an upgraded variant with a lock-on-after-launch feature. The AIM-9X Block II is also equipped with redesigned fuse and a unidirectional forward-quarter data-link.

Design features of AIM-9X Sidewinder
The AIM-9X incorporates an agile thrust vector controlled airframe. It uses a high-performance staring focal plane array sensor and integrates components such as rocket motor, warhead and fuse of AIM-9M. The digital design architecture of the missile can adapt enhancements for future requirements.

The missile has a length of 3m, diameter of 12.7cm, a fin span of 44.4cm and a wing span of 35.3cm. It weighs approximately 85kg. It can carry a 9.36kg annular blast fragmentation warhead to a range of more than ten miles.

The infrared (IR) homing guidance section performs the tracking and guidance functions. The AIM-9X is a system-guided missile employing a mid-wave IR FPA seeker. The seeker, equipped with High Off-Boresight (HOBS), can be used with a helmet-mounted sight for wider attack envelope. It uses passive infrared (IR) energy for target acquisition and tracking. After the launch, the seeker follows the heat signature from the engines of the hostile aircraft.

The IR homing ensures the launch of the missile during day/night and in electronic countermeasure (ECM) environment. The missile can engage targets in the near beyond visual range (NBVR) and within visual range (WVR) areas.

Propulsion
The propulsion for the AIM-9X is provided by Mk 36 rocket motor integrating a thrust vector control package. The solid propulsion motor uses a reduced-smoke hydroxyl-terminated polybutadiene (HTPB) propellant. The cylindrical grain form and integrated control actuation system enhance the range and manoeuvrability of the missile.

As of September 2012, Kuwait, Malaysia, Oman and Poland also made requests for the acquisition of AIM-9X-2 Sidewinder Block II missiles.


In December 2004, Raytheon received a $158m contract from US Naval Air Systems Command for the production of 443 all-up-round AIM-9X missiles, 153 AIM-9X training missiles and associated equipment. 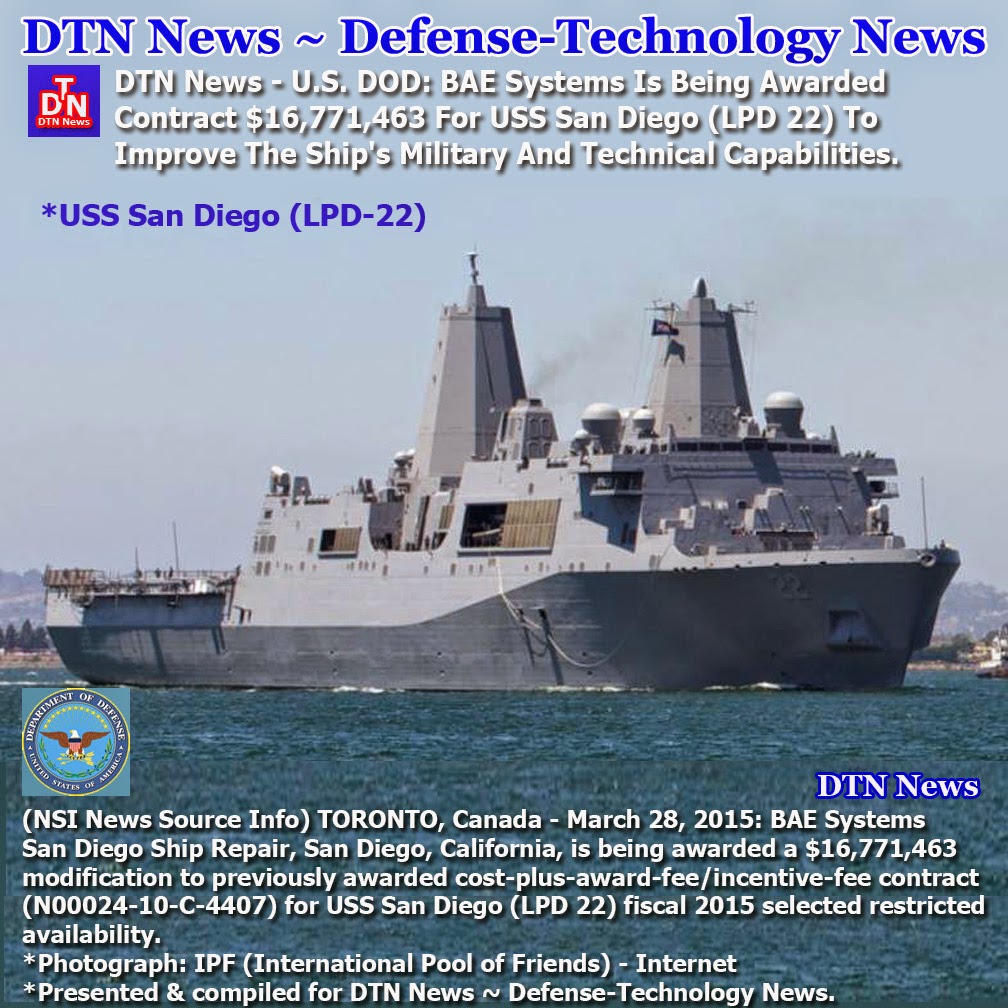 A select restricted availability includes the planning and execution of depot-level maintenance, alterations, and modifications that will update and improve the ship's military and technical capabilities.

This modification includes options which, if exercised, would bring the cumulative value to $18,796,615.

Work will be performed in San Diego, California, and is expected to be completed by November 2015.

Fiscal 2015 operations and maintenance (Navy) funding in the amount of $16,771,463 will be obligated at time of award and will expire at the end of the current fiscal year.

The launch of the 684-foot ship into the Gulf of Mexico marks an important milestone in the ship’s construction process.

“As the sixth ship of the class, this launch is a considerable achievement in the program.” said Jay Stefany, LPD 17 program manager for the Navy’s Program Executive Office (PEO) Ships. “The ship was more than 75 percent complete prior to launch, more complete than any other ship of the class at this point in construction. We continue to work with the shipbuilders to identify production improvements and a consistent build plan that will lead to lower costs and predictable schedules. San Diego is the first ship of the LPD 17 class that started construction after Hurricane Katrina hit the Gulf Coast, and is testament to the spirit of the Northrop Grumman workers as they and the shipyard continue their return to normalcy.

The ship’s keel was laid May 23, 2007. Named for the city of San Diego and her future homeport, the ship’s next major milestone will be christening, scheduled for June. The future USS San Diego is expected to be delivered to the Navy in 2011.

The principal mission of LPD 17 class amphibious transport dock ships is to transport and deploy the necessary combat and support elements of Marine Expeditionary Units and Brigades. The ship will carry approximately 720 troops and have the capability of transporting and debarking air cushion (LCAC) or conventional landing craft and Expeditionary Fighting Vehicles (EFV), augmented by helicopters or vertical take off and landing aircraft (MV 22). These ships will support amphibious assault, special operations and expeditionary warfare missions through the first half of the 21st century.

As one of the Defense Department’s largest acquisition organizations, PEO Ships is responsible for executing the development and procurement of all major surface combatants, amphibious ships, special mission and support ships, and special warfare craft. Currently, the majority of shipbuilding programs managed by PEO Ships are benefiting from serial production efficiencies, which are critical to delivering ships on cost and schedule.