DTN News - DEFENSE NEWS: The Defense Budget And American Power*Editor's Note: In testimony before the Senate Budget Committee, Michael O'Hanlon discusses cuts to the U.S. defense budget. O'Hanlon identifies changes in force structures, weapons plans and other military programs that could be considered, along with the rough ten-year savings that could result.

Source: DTN News - - This article compiled by Roger Smith from reliable sources Michael E. O'Hanlon, Director of Research and Senior Fellow, Foreign Policy, 21st Century Defense Initiative U.S. Senate Budget Committee (Brookings)(NSI News Source Info) TORONTO, Canada - March 7, 2012: Mr. Chairman, Mr. Ranking Member, other Members of the Committee, it is an honor to appear before the committee today. That is especially true for a Congressional Budget Office alum like myself who remembers well working for senators Domenici and Sasser and others some two decades ago, when the Cold War ended and we were collectively trying to reduce defense budgets responsibly. 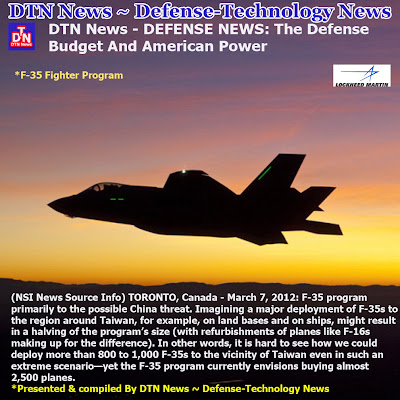 Source: DTN News - - This article compiled by Roger Smith from reliable sources David Axe - Wired(NSI News Source Info) TORONTO, Canada - March 7, 2012: It seemed like a promising step for America’s next stealth fighter: The F-35 Joint Strike Fighter passed a key Pentagon test of its combat capability. But it turns out that the family of jets cleared the mid-February exam only because its proctor agreed to inflate its grade. In essence, the military helped the F-35 cheat on its midterms. 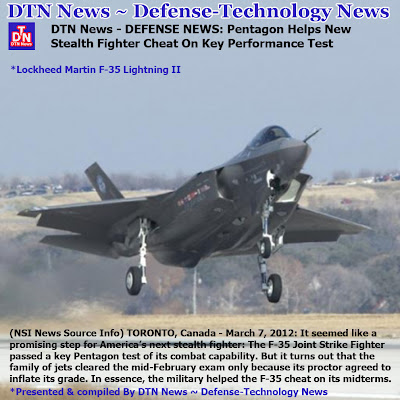 The collusion between the Pentagon testing body, known as the Joint Requirements Oversight Council (JROC), and the F-35 program — first reported by Inside Defense – confirmed that the US’ most expensive warplane met previously established performance criteria. Specifically, the review was meant to show that the jet can fly as far and take off as quickly as combat commanders say they need it to.
But the review council, which includes the vice chiefs of the Army, Navy, Air Force and Marine Corps, eased the standard flying profile of the Air Force’s F-35A model — thereby giving it a range boost of 30 miles. And it tacked an additional 15m onto the required takeoff distance for the Marines’ F-35B version, which US Defense Secretary Leon Panetta just took off budgetary probation.
The grade inflation comes at a critical time for the new warplane. The military’s new five-year budgeting blueprint, also released in February, cut more than 100 existing Air Force fighters while leaving intact plans to produce nearly 2500 F-35s — essentially doubling down on the new plane despite a recent report listing13 serious design flaws. The total cost to buy and fly the full fleet of F-35s over 50 years is estimated at around $US1 trillion, once inflation is factored in, making it the costliest defence program in human history.
In fairness, it’s not unknown for capability standards, also known as “Key Performance Parameters”, to shift during a weapon’s development. But the shifts usually reflect the evolving needs of the military or some change in the operational environment, such as a likely enemy tweaking its own defence plans. In this case, the JROC gave the F-35 a pass that was apparently designed so the over-weight, over-budget, long-delayed stealth fighter could avoid yet another embarrassing scandal.
Citing earlier efforts to boost the Joint Strike Fighter’s image, defence analyst Winslow Wheeler accused the Pentagon of “putting lipstick on the pig”. That’s an apt characterization of recent moves by the Pentagon’s F-35 boosters.
Last month, the Marine Corps held a lavish ceremony marking the arrival of two F-35 training models at the main Joint Strike Fighter “schoolhouse” in Florida. “It’s a significant jump in technology,” said Marine Lt Col David Berke, who neglected to mention that the training jets were not even cleared to fly locally. That clearance came a couple of weeks later, but again with an asterisk: Only specially qualified test pilots would be permitted to fly the jets, for now.
Increasingly, it seems the F-35 only passes tests when the tests are rigged. The good news for the fighter program typically comes with buried caveats. In response to Wheeler’s criticism, Stephen O’Bryan, then a vice president for stealth-fighter contractor Lockheed Martin, insisted that “the F-35 is meeting or exceeding every single one of the Key Performance Parameters that the services have mandated”. Of course, it’s easy to ace a test when the teacher’s already decided you passed.
*Link for This article compiled by Roger Smith from reliable sources David Axe - Wired*Speaking Image - Creation of DTN News ~ Defense Technology News *This article is being posted from Toronto, Canada By DTN News ~ Defense-Technology News Contact:dtnnews@ymail.com ©COPYRIGHT (C) DTN NEWS DEFENSE-TECHNOLOGY NEWS

Source: DTN News - - This article compiled by Roger Smith from reliable sources By Michael B. Sauter and Charles B. Stockdale, 24/7 Wall St. - The Bottom Line on msnbc.msn.com(NSI News Source Info) TORONTO, Canada - March 7, 2012: Global sales of arms and military services by the 100 largest defense contractors increased in 2010 to $411.1 billion, according to the Stockholm International Peace Research Institute. The increase reflects a decade-long trend of growing military spending. Since 2002, total arms sales among the 100 largest arms manufacturers have increased 60 percent. 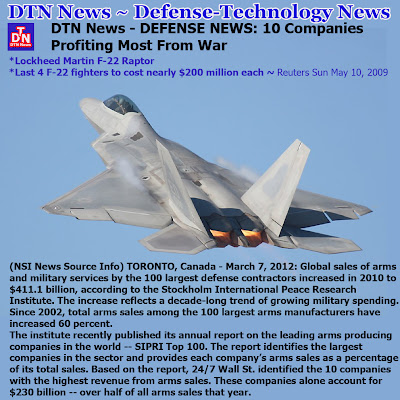 The institute recently published its annual report on the leading arms producing companies in the world -- SIPRI Top 100. The report identifies the largest companies in the sector and provides each company’s arms sales as a percentage of its total sales. Based on the report, 24/7 Wall St. identified the 10 companies with the highest revenue from arms sales. These companies alone account for $230 billion -- over half of all arms sales that year.

While many industries continued to suffer in 2010 as a result of the financial crisis, leaders in the arms and military services were largely unaffected. According to SIPRI arms industry expert Susan Jackson, when sales dropped, it was not because of the financial crisis. Instead, Jackson notes that loss in sales was due to “the withdrawal of foreign troops from Iraq and the subsequent expected decrease in related equipment sales.”
The composition of the 10 largest manufacturers reflects the state of modern warfare. More and more, battles are fought remotely through air surveillance and strikes rather than on-the-ground combat. As a consequence, seven of the 10 largest companies are among the leading aerospace companies. Surveillance and battlefield communications also are increasingly important in modern warfare. All of the companies in the top 10 have significant electronics divisions.
Of the 100 companies on the list, 44 are based in the U.S., including Boeing, Northrop Grumman and Lockheed Martin. The American companies account for more than 60 percent of arms sales revenue of the 100 manufacturers. Seven of SIPRI’s top 10 are American, one is British, one is Italian and one is a multinational EU conglomerate. The U.S. federal government has contract deals with all seven American companies. These seven are among the top 10 U.S. federal contractors by amount procured, according to the government’s Federal Procurement Data System.
24/7 Wall St.: The 10 most expensive weapons in the world
24/7 Wall St.’s analysis of the SIPRI 100 includes revenue for arms sales for 2007, 2009 and 2010, as well as percentage of company revenue from arms sales, employees, industry and applicable military division. 24/7 Wall St. also included history of each company and notable weapons systems manufactured.
These are the companies profiting most from war.
1. Lockheed Martin
Lockheed Martin is the largest arms-producing and military services company in the world, with nearly $3 billion more in arms sales than second place BAE Systems. Although military sales make up the majority of its revenue, it is significantly less than many other major arms-producers, including BAE’s 95 percent share. In addition to being the world’s largest arms-seller, Lockheed is also the largest federal contractor in the U.S. by a large margin. In 2010, the company’s government contracts totaled nearly $36 billion. Lockheed produces a number of major products, including the Trident missile and the F-16 and F-22 fighter jets. Despite being the largest military service company on this list, Lockheed is only the fourth-largest company by overall sales among the companies featured on this list. In 2007, the Lockheed was the third-largest arms producer.

2. BAE Systems
BAE Systems is an aerospace and defense contractor based in the UK. The company has a major U.S. subsidiary, BAE Systems, Inc., which by itself would be the seventh-largest weapons manufacturer in the world. The British company was formed in 1999 through the merger of Marconi Electronics (which was at the time a subsidiary of GE) and British Aerospace. BAE produces weapons systems in nearly every major military category, including aircraft, defense electronics, vehicles, naval vessels and small arms. Among the company’s notable contributions are the M2/M3 Bradley fighting vehicle, the F-35 Joint Strike Fighter, the Type 45 destroyer and the Astute-class nuclear submarine. In 2010, 95 percent of its revenue came from arms sales, $32.88 billion in all.
3. Boeing
As recently as 2007, Boeing was the largest arms producer in the world. By 2008, it had fallen behind Lockheed Martin and U.K.-based BAE Systems. The aerospace and defense company remains one of the largest in the world, however. Boeing is the second-largest aircraft producer in the world by deliveries, behind only Airbus. It is also the second-largest U.S. government contractor, procuring just under $19.5 billion in contracts in 2010. Major products produced by the company include the KC-767, an aerial refueling tanker, and the F-15 fighter jet. Boeing made less in arms sales in 2010 than it did in 2009, although arms sales made up a larger amount of total sales -- two percentage points, to be exact -- in 2010 compared to 2009. Even in 2010, however, only 49 percent of revenue came from arms sales, which is among the lowest rates among companies on this list.
A24/7 Wall St.: Eight reasons gas will hit $5 this year
4. Northrop Grumman
Northrop Grumman is the fourth-largest weapons contractor in the U.S. The company, which is based in Falls Church, Va., is one of the leaders in aerospace technology and the leading producer of naval vessels in the world. The company manufactures Nimitz-class carriers that are the current flagships of the U.S. Navy. And over the next few years it is also set to build the new, $9.7 billion Gerald R. Ford-class supercarriers. Northrop Grumman also develops radar systems for aircraft and ground defense, sensor systems for a variety of vehicles and several unmanned aircraft and drones. Weapons systems sales accounted for 81 percent of company revenue in 2010. Arms sales grew by approximately $3.5 billion between 2007 and 2010.

24/7 Wall St.: Nine States Closing the Most Mail Centers
5. General Dynamics
General Dynamics is an American defense company that deals in aerospace, combat systems, information systems and technology, and marine systems. Although the company has been around since 1952, it has enjoyed a resurgence beginning in the 1990s, thanks largely to a number of mergers. Since 1997 General Dynamics says it has acquired more than 50 companies. Over this same period, its revenue increased from $4 billion to more than $32 billion. It also added more than 60,000 employees to its workforce. Currently, 74 percent of the company’s sales are arms sales. General Dynamics owns Electric Boat and Bath Iron Works, two of the largest naval vessel builders in the world. General Dynamics is notable known for its Ohio-class ballistic missile submarine, the Seawolf-class submarine, the M1 Abrams tank and the Arleigh-Burke-class destroyer.
Click here to read the rest of the companies profiting the most from war.
*Link for This article compiled by Roger Smith from reliable sources By Michael B. Sauter and Charles B. Stockdale, 24/7 Wall St. - The Bottom Line on msnbc.msn.com*Speaking Image - Creation of DTN News ~ Defense Technology News *This article is being posted from Toronto, Canada By DTN News ~ Defense-Technology News Contact:dtnnews@ymail.com ©COPYRIGHT (C) DTN NEWS DEFENSE-TECHNOLOGY NEWS