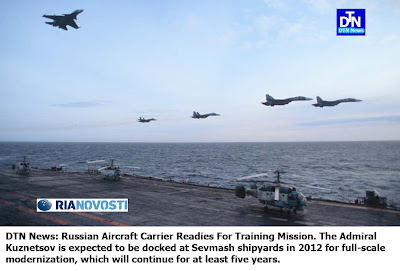 dry dock after scheduled repairs and is getting ready for a training mission in the Barents Sea, the Northern Fleet said in a statement. "The Admiral Kuznetsov aircraft carrier will sail to the Barents Sea at the end of September on a training mission relevant to its main purpose," the statement said. The warship was assigned to the Northern Fleet in January 1991. It is capable of carrying 26 Su-33 Flanker-D and MiG-29K Fulcrum-D carrier-based fighter jets, and 24 anti-submarine helicopters. The upcoming mission will most likely involve a comprehensive program of naval pilot training to further develop the skills acquired by pilots at the Nitka Naval Pilot Training Center in Ukraine. The Admiral Kuznetsov is expected to be docked at Sevmash shipyards in 2012 for full-scale modernization, which will continue for at least five years. Russia is aiming to finish drafting plans for a new nuclear-powered aircraft carrier for its Navy by 2012 and build at least three of the ships for its Northern and Pacific fleets.
Related News *Russia set to use naval pilot training facilities in Ukraine *Moscow set to upgrade Admiral Kuznetsov aircraft carrier *Russian Navy's days could be numbered *Russia tests Indian fighter jets on board its aircraft carrier Multimedia *Admiral Kuznetsov. INFOgraphics. *Mikoyan MiG-29K *Taking off and landing aboard an aircraft carrier
Posted by Defense-Technology News at 9/14/2010 11:40:00 PM No comments: 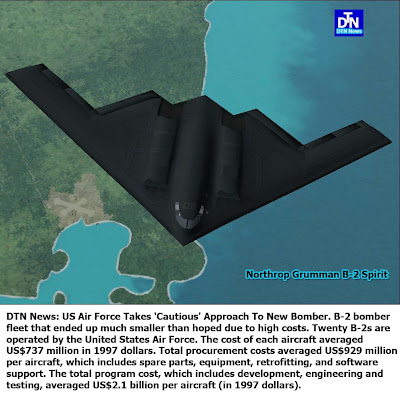 t weapons programs, the Air Force's top official said Monday. The "long-range strike" project also will be focused mainly on delivering conventional rather than nuclear weapons, Air Force Secretary Michael Donley said. While the Air Force was "confident" about the need to develop a new way to strike at a long-distance, it was mindful of past mistakes in bomber programs plagued by delays and cost overruns, he said. "We approach the issue with both confidence and caution," Donley told the Air Force Association. "Cautious not to repeat the painful experience of previous Air Force bomber programs: narrowly focused capabilities, high risk technologies, and high costs contributing to affordability problems, leading to program cancellations, or low inventories," he said. His comments reinforced warnings from Defense Secretary Robert Gates, who has vowed to streamline how the Pentagon operates to free up money for urgent needs and vital weapons. In a press conference after his speech, Donley cited problems with the F-111, B-1 and B-2 bombers, and said the Air Force wanted to rely on proven, existing technologies instead of breaking new ground for the next generation bomber. He said the fleet would need to be large enough to last over a 30-year period, unlike the B-2 bomber fleet that ended up much smaller than hoped due to high costs.
Twenty B-2s are operated by the United States Air Force. The cost of each aircraft averaged US$737 million in 1997 dollars. Total procurement costs averaged US$929 million per aircraft, which includes spare parts, equipment, retrofitting, and software support. The total program cost, which includes development, engineering and testing, averaged US$2.1 billion per aircraft (in 1997 dollars). Donley also said the long-range platform could be an aircraft or a missile, and that nothing had been ruled out while military planners review various studies on the project. The Air Force would unveil more details for the program in the proposed budget for fiscal year 2012, he said.
Posted by Defense-Technology News at 9/14/2010 11:38:00 PM No comments:

Sierra Nevada Corp., Sparks, Nev., was awarded a $12,472,304 contract which will provide consoles for integration onto MC-130W aircraft. At this time, the entire amount has been obligated. ASC/WISS, Wright-Patterson Air Force Base, Ohio, is the contracting activity (FA8629-09-C-2445).

BAE Systems Technology Solutions & Services was awarded a $6,300,788 contract modification which will provide non-personal services to operate, maintain and support the Perimeter Acquisition Radar Attack Characterization System and site at Cavalier Air Force Station, N.D. At this time, no funds have been obligated. 21 CONS/LGCZB, Peterson Air Force Base, Colo., is the contracting activity (FA2517-09-C-8000; PO0043).

SRI International, Menlo Park, Calif., is being awarded a $22,540,804 firm-fixed-priced contract to provide Flextrain System multi-mission training support to the Army National Guard. This requirement is for the Flextrain System to support the Exportable Combat Training Capability and Mobile Virtual Training Capability for Army National Guard. Flextrain provides multi-level/multi-mission support in a wide variety of training environments. Work will be performed in Menlo Park, Calif., and is expected to be completed by September 2011. Contract funds will expire at the end of the current fiscal year. This contract was not competitively procured. The Naval Surface Warfare Center, Indian Head, Md., is the contracting activity (N00174-10-C-0058).

Electric Boat Corp., Groton, Conn., is being awarded a $17,903,100 cost-plus-fixed-fee contract under previously awarded basic ordering agreement contract (N00024-10-G-4314) to support submarine repair work at Portsmouth Naval Shipyard on Los Angeles-class and Virginia-class submarines during on-going availabilities. Ships scheduled to undergo maintenance availabilities repairs include USS Virginia (SSN 774) and USS San Juan (SSN 751). Work will be performed in Portsmouth, N.H., and is expected to be completed by March 2011. Contract funds will expire at the end of the current fiscal year. The Supervisor of Shipbuilding, Conversion and Repair, Groton, Conn., is the contracting activity.

SmithKlineBeechman, dba GSK, Philadelphia, Pa., is being awarded a maximum $21,337,380 firm-fixed-price, sole-source contract for medical supplies. There are no other locations of performance. Using services are Army, Navy, and Air Force. There was originally one proposal solicited with one response. The date of performance completion is Dec. 30, 2011. The Defense Logistics Agency Troop Support, Philadelphia, Pa., is the contracting activity (SPM2DP-10-C-0001). 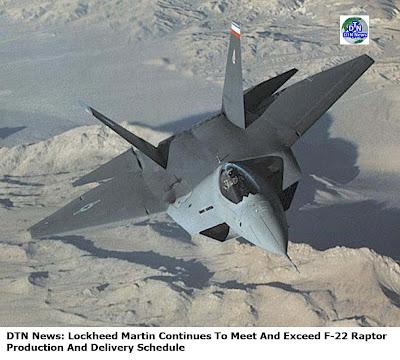 [NYSE: LMT] continues to meet and exceed the production and delivery schedule for the F-22 Raptor, with 86 straight aircraft delivered on or ahead of schedule to the U.S. Air Force. To date, the company has delivered 166 production F-22s, including 13 this year.
The F-22 EMD program marked a successful first flight on September 7, 1997. The flight test program, which has already begun in Marietta, Georgia, will continue at Edwards AFB, California through the year 2001. Low rate production is scheduled to begin in FY99. The aircraft production rate will gradually increase to 36 aircraft per year in FY 2004, and will continue that rate until all 339 aircraft have been built (projected to be complete in 2013). Initial Operational Capability of one operational squadron is slated for December 2005.The F-15 fleet is experiencing problems with avionics parts obsolescence, and the average age of the fleet will be more than 30 years when the last F-22 is delivered in 2013. But the current inventory of F-15s can be economically maintained in a structurally sound condition until 2015 or later. None of the 918 F-15s that were in the inventory in July 1992 will begin to exceed their expected economic service lives until 2014. Media Contact: Chris McGee
Office: 770-494-2578
Mobile: 770-289-3309
Email: christopher.mcgee@lmco.com
Posted by Defense-Technology News at 9/14/2010 09:34:00 PM No comments:

DTN News: Future Missile System For Gripen
Defence and security company Saab has received an order from FMV (the Swedish Defence Materiel Administration) regarding the integration of the active radar-guided Beyond Visual Range (BVR) missile, Meteor. The order is worth MSEK 312 spread over four years. 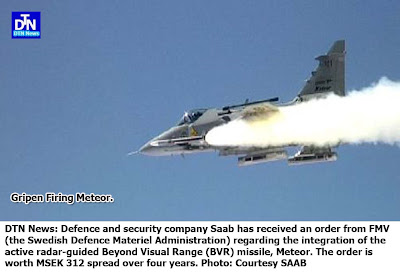 tems, such as the radar and displays. The order includes test flights and test firing, as well as the integration of Meteor with support and maintenance systems such as simulators and planning computers. The Swedish Gripen C/D aircraft will also have a two-way datalink for communication between the aircraft and the missile once it has been fired. "Meteor has substantially better performance than any other BVR missile existing today, which will obviously increase Gripen's ability to defend against other aircraft," says Lennart Sindahl, Head of business area Aeronautics within Saab. "The fact that Gripen is also being used internationally as an airborne platform in the development of Meteor shows that we have a technical level in Sweden that few other countries can match." Gripen has been used since 2006 as the test aircraft for the development of Meteor. Multiple missiles have been fired from Gripen to date. This experience can now be utilised for a more cost-effective integration of Meteor with the Swedish Armed Forces' Gripen C/D. The order mainly concerns Saab's operations in Linköping and to some extent Gothenburg. Saab serves the global market with world-leading products, services and solutions ranging from military defence to civil security. Saab has operations and employees on all continents and constantly develops adapts and improves new technology to meet customers’ changing needs. Meteor has been designed to defeat current and future threats at beyond visual range, with an understanding performance that will totally redefine an aircraft's air combat capability. Meteor has the largest No Escape Zone of any air-to-air weapon, resulting in a long stand-off range and high kill probability that ensures air superiority and pilot survivability. The programme is on schedule to deliver the first production deliveries in 2012 and is the result of a successful six-nation European collaboration, in which Saab Dynamics of Sweden is a partner of the prime contractor, MBDA. The Gripen is the first of the new generation fighter aircraft to enter service and the first to be used for firing Meteor, the high-tech beyond visual range missiles of the future. Using the latest available technology it is capable of performing an extensive range of air-to-air and air-to-surface operational missions and employing the latest weapons. Gripen, designed to meet the demands of current and future threats, is in service with the Swedish, Czech Republic, Hungarian and South African Air Forces and has also been ordered by the Royal Thai Air Force. The UK Empire Test Pilots´ School (ETPS) is also operating Gripen as its advanced fast jet platform for test pilots world wide.
Posted by Defense-Technology News at 9/14/2010 08:21:00 PM No comments: