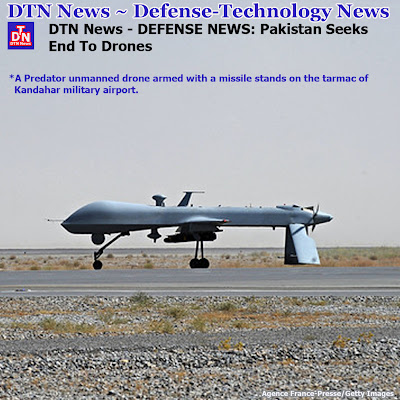 The demands were made as part of a debate in Parliament Tuesday over how the country should pursue relations with the U.S. in the wake of public anger over the unintentional killing of the Pakistan soldiers by firing from U.S. helicopters.
Pakistan's government retaliated last year by stopping the North Atlantic Treaty Organization from using its territory to provision troops in Afghanistan, forcing NATO to route more of its equipment and other supplies through Central Asia.
Islamabad said it wouldn't reopen the supply routes until Parliament had a chance to re-evaluate the country's relations with the U.S. High-level military and civilian visits to Pakistan by U.S. officials have been suspended in recent months until Parliament can conclude its debate, which has been delayed many times.
White House and State Department officials said they were awaiting the full parliamentary process before responding to requests for an apology. Washington is waiting to hear from the Pakistani government about how they would like to move forward, White House spokesman Jay Carney said.
Although U.S. officials say much routine business, including civilian aid projects and lower-level military contacts, has continued unaffected, the tensions have destabilized bilateral relations at a time when the U.S. was hoping Pakistan could play a role in helping develop peace talks with the Afghan Taliban.
The level of public anger in Pakistan toward the U.S. has been rising. Many Pakistanis oppose drone strikes against Taliban militants, which they believe kill large numbers of civilians.
U.S. officials deny sizable civilian casualties, and the Pakistan military says it has shared intelligence occasionally on strike targets.
The NATO raid in November along the Afghan border that killed the Pakistani soldiers sent relations to a new low. The Obama administration's failure to apologize, despite calls from the U.S. State Department to do so, further aggravated the strained relationship.
Still, some Pakistani analysts say the country realizes it needs U.S. civilian and military aid and is unlikely to break ties despite the recent political theater.
"The normalization of the relationship will definitely happen, and supplies will resume," said Hasan-Askari Rizvi, a political analyst in Lahore.
Expectations that NATO supply routes might reopen were raised earlier this month when Gen. James Mattis, commander of U.S. Central Command, told Congress he would soon visit Pakistan to discuss the matter.
Delays in the parliamentary hearing appear to have set back that trip, which is still expected though it isn't formally scheduled, a U.S. official said.
Pakistani lawmakers are likely to vote on a resolution about ties with the U.S. next week, after which Pakistan's government and powerful military will decide how to proceed.
Pakistan's leaders are likely to push Washington for a formal apology as a prerequisite to re-engaging with senior U.S. officials and reopening NATO supply routes, Mr. Rizvi said.
The government, though, is unlikely to make a demand for the cessation of drone strikes a precondition to resumption of normal ties, he added.
Write to Tom Wright at tom.wright@wsj.com
*Link for This article compiled by Roger Smith from reliable sources By Tom Wright - The Wall Street Journal Asia*Speaking Image - Creation of DTN News ~ Defense Technology News *This article is being posted from Toronto, Canada By DTN News ~ Defense-Technology News Contact:dtnnews@ymail.com ©COPYRIGHT (C) DTN NEWS DEFENSE-TECHNOLOGY NEWS