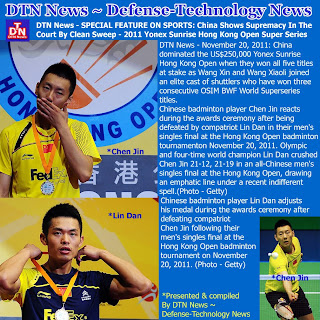 (NSI News Source Info) TORONTO, Canada - November 20, 2011: Chinese badminton player Chen Jin reacts during the awards ceremony after being defeated by compatriot Lin Dan in their men's singles final at the Hong Kong Open badminton tournament on November 20, 2011. Olympic and four-time world champion Lin Dan crushed Chen Jin 21-12, 21-19 in an all-Chinese men's singles final at the Hong Kong Open, drawing an emphatic line under a recent indifferent spell.
China dominated the US$250,000 Yonex Sunrise Hong Kong Open when they won all five titles at stake as Wang Xin and Wang Xiaoli joined an elite cast of shuttlers who have won three consecutive OSIM BWF World Superseries titles.
An all-Chinese sweep could not be prevented, as both Korea and Denmark fell at the last hurdle during finals day of the 2011 Yonex Sunrise Hong Kong Open Super Series.

The Koreans had the best chance to prevent a 100% Chinese win of all titles at stake on Sunday in the Hong Kong Coliseum.

World #2 Jung Jae Sung / Lee Yong Dae were up against World Champions and top seeds Cai Yun / Fu Haifeng and were brimming with confidence, having actually won their last 3 meetings with the 4-time World Champions from China.

It was also the longest and most exciting match of the day as both pairs kept the crowds on the edge of their seats with some excellent play. The Koreans won the first game 21-14, withstanding the onslaught of attacks from the Chinese with their defending prowess. It was a seesaw battle in the second game as the lead changed hands constantly between the two pairs.

Jung and Lee had match points, twice, at 20-19 and 21-20, but both were saved brilliantly by the Chinese. The Chinese themselves had 2 games points blocked but hung on bravely to win the second game 24-22.

The 3rd game saw the Koreans being 2 points away from the match when they led 19-15, but the Chinese managed to score 6 points in a row to take the game and match 21-19.

“I think the Koreans were a bit rushed to win the championship towards the end of the second and third games. We were mentally strong and kept calm even when we were trailing,” commented Cai Yun after the match.

Both Chinese players also thanked the crowd for their support and attributed their win to that support.

One Chinese too many

Defending champions in the mixed doubles Joachim Fischer Nielsen / Christinna Pedersen of Denmark couldn’t make it three Super Series titles in a row when they lost out to the tournament’s top seeds Zhang Nan / Zhao Yunlei in 3 games 21-15, 17-21, 17-21. It was their first loss the Chinese in five meetings.

The Danes were brilliant in the first game, varying the attack very well from the backcourt and holding the edge in flat and fast exchanges at the mid-court, causing the Chinese to make some errors. The first game went to Danes 21-15.

The second game began quite similarly to the first, as the Danes continued their pressure play from the back and at the net, and they were leading 11-6 at the mid-game interval. But the reigning World Champions from China didn’t buckle under pressure. Encouraged by the chants of support from the Chinese crowd, they increased their level of play, channelling most of their attacks to Christinna Pedersen. Add to that a few uncharacteristic errors from the Danes, and the Chinese managed to win the second game 21-17.

As with all their previous matches, the winner had to be decided by a third game. It was neck-and-neck all the way in the final game, and the two pairs were still tied at 16-all but it was the Chinese who managed to surge ahead and win the 3rd game 21-17, taking away the title from the Danes.

“We played really well in the first game and were leading quite comfortably in the second. But then we had troubles with the draft at our side of the court,” said Joachim after the match.

“It’s really unfortunate that we lost today. We just have to go back now and assess our game.”

The Danes were also disappointed that they didn’t bring their A-game in the finals as they had played very well throughout the whole week.

“Of course we are disappointed, but we just have to take the positives from Hong Kong. For next week’s China Open, we will just have to be ready right from the first round,” said Christinna after the match.

Another Dane bites the dust

The second Dane who lost in today’s finals was Tine Baun, beaten in straight games by China’s Wang Xin, and thus taking their head-to-head count to a massive 9-0 for her diminutive Chinese opponent.

The second game was even straightforward for the Chinese, as the Dane ran out of ideas on how to outmanoeuvre her opponent. Wang Xin ran away with the game and the match, winning the second 21-14.

“I started the first game really well, but then I started losing confidence a little bit and lost of a bit of the game plan,” explained Tine after her loss.

The Dane has never beaten her opponent of today. Asked on why it is so difficult to defeat Wang Xin compared to the other top ‘Wangs’, Tine replied, “I think it’s her ability to change and vary her tactics several times during the game compared to the other players. Her strokes are different.

“And also because she’s a left-hander,” added the Dane.

The journey continues for Tine at next week’s China Masters in Shanghai, where she should be able to cruise to a quarter-final encounter with Wang Xin and continue her long quest for redemption.

The first of 2 all-Chinese clashes on finals day was the men’s singles final. World Champion Lin Dan beat his team-mate Chen Jin, the number 5 seed, 21-12, 21-19 in just 31 minutes. After the match, Lin Dan mentioned again the windy conditions on the court. He also indicated that he might not be here next year defend his title since his main focus will be to do well at the Olympics.

The women’s doubles final pitted the tournament’s top seeds and defending champions Wang Xiaoli / Yu Yang against second seeds, also from China, Tian Qing / Zhao Yunlei. However the finals was cut short due to an injury to Zhao Yunlei’s left knee. She and her partner were already trailing 2-14 in the second game had to forfeit the title to their opponents.